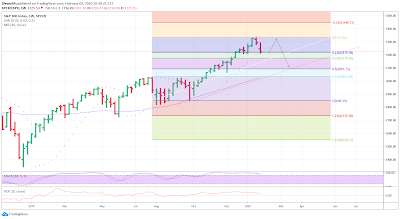 Those who follow Elliott Wave counting have been looking for an end to the current wave up, so a down move has not surprised some.  For others, fear that the market's current stretch is overdone, has caused concern.

As the chart shows, price has dropped down to break through the stop-loss marker generated by the Wilder's Parabolic indicator.  a break below the stop loss indicator signals the investor to sell the position and reverse course, using a new stop indicator that begins to form stemming from the last high price.  A closer examination of this chart SPX Parabolic Chart shows that in sideways markets, it could cause one to sell at the bottom only to rebuy at the top. 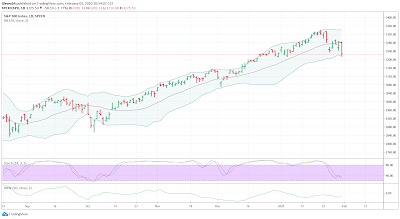 Looking at the daily chart, with a Bollinger Band, one can see that price has reached the bottom of the band, for some, that could indicate an oversold level and a buy.

We can also see that the other times that price has hit this lower level of the bands, it rebounded and stocks continued along on their merry way, ever higher.  A difference that we may see now is that there has been real economic damage as a result of the virus.  China is being sealed off as neighboring countries close borders and airlines cancel flights to China.  The potential economic effects of the situation has not been lost on bonds which continue to rally towards the highs. 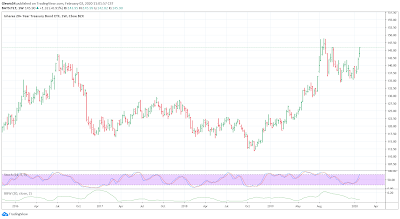 Bonds have been rip-roaring for the past two weeks and appears to be headed much higher.  That said, having a proper asset allocation in your investment portfolio should help you should stocks continue to fall.

Also, Gold has been a key performer. 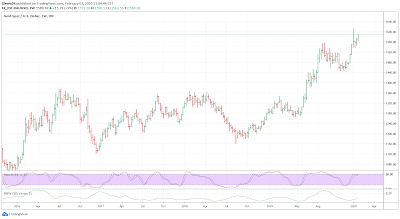 And while I have been touting Gold and Silver for awhile now, few have gotten on board neither participating in normal market accounts through exchange traded funds such as GLD and SLV, or through outright physical purchases.

Both bonds and precious metals have moved opposite of the market offering a balance in a diversified portfolio.

Lots more market action to come this next week.  How you want to position yourself depends upon your overall outlook.

Very Long Term Outlook SPX  This link takes you to my TradingView market charts page.  I encourage you to go there and follow my thoughts as we go through the market gyrations.  In this long term outlook, with prices going back beyond 1929's great depression, one might see that the market outlook appears to be on track to advance for decades to come.

On the intermediate term however, the first SPX chart shows my expectations for the next week.  Prices should rally to test the weekly highs.  If we fail to exceed the highs, I expect that prices will fall back.  How deep the correction will be is hard to say but from past experiences with such tests of the high, a failure usually brings about a significant decline.  My first expectation is a move down to the 3100 level by March option expiration.  I will be planning to purchase put option spreads, through March expiration, to capture this expected move.  But as in the past, these setups have more often than not played out as events such as the Fed adding liquidity or the President pounding the table to buy have overshadowed normal expectations.

It's hard to imagine that the market will be able to get any traction on the downside, at least not until after the elections in November.  But considering that many investigations into Trump, culminating with an Impeachment trial have yet to get Trump out of office, perhaps the only way would be to destroy the economy so prevent his reelection.

The president appears to be extremely vigilant though of this possibility and his immediate criticism of the Fed when they tried to raise rates shows that any actions by others to hurt the market are quickly addressed.  While this time may be different, I expect that news that an antidote for the virus has been found and off to all time highs - again.

What do you think?  It will be an interesting week in the markets for sure.