Market Chaos - Across the Board

As suggested in the last posting, the market was in the process of topping.  I had anticipated a three-week test of the high but prices continued to overshoot for one more week before collapsing.  What has occurred since has shown some fundamental weaknesses in the system - and that is, too much debt.

Hardly any market instruments were spared any pain.  Stocks tanked while bonds soared, but then experienced extreme volatility.  Gold, considered to be the ultimate safe haven also gave up gains that took the metal past $1,700.  In my stock universe, 163 stocks declined while only 3 advanced.  83 stocks were below a -2 standard deviation on a 20-week average.  Statistically, there is only a 2.5% chance that a -2 reading may occur, in a normal environment.

Of the three stocks that rose, I'll add UPS to this posting.  It may rebound some 12 points from it's current 94 level before meeting serious trendline resistance.

On other positive notes, stocks and gold both held a .328% retracement level, generally indicating overall continued strength in both.  However the weekly stochastic indicators point to lower prices that might continue for some time. 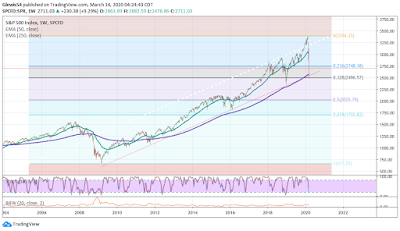 In the SPX weekly price chart, we can also see that an important trendline, a 250 week exponential moving average that offered support in the past, continued to hold. 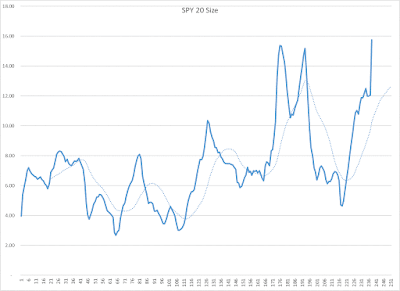 While that is encouraging, one rule I generally follow is that when markets go to oversold levels on a weekly basis, I look to my Size indicator.  General rule here is to stay with the trend until Size reverses.  As can be seen here, Size is soaring and it may take some time for it to turn.

Another important indicator is the Stochastics.  Here is the 20-week stochastic reading 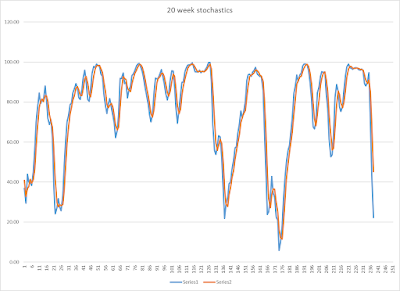 Rule of thumb here is that one would hold off on buying until stochastics begin rising from oversold levels.  Clearly we are headed down.

And while my Cycle indicator shows that we are at Cycle lows now, the cycle can work its way over many weeks/months before heading higher. 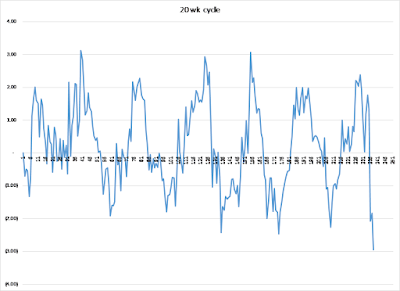 From a value perspective, I was adding SPY and some stock positions at the 250 week average.  My philosophy here is that if you can buy at or below a long term moving average, at worst, at some point you will at least get "regression to the mean" should prices continue lower.

And while from my perspective, it was an appropriate opportunity for me to deploy some cash, one always has to consider that market wealth has been proven to come from proper asset allocation.  Other factors such as market time, stock selection and other techniques fall short of the benefits of correct asset allocation.  Another thought as markets gyrate is periodic rebalancing, enabling me to sell things at high levels and add money to areas that have underperformed. 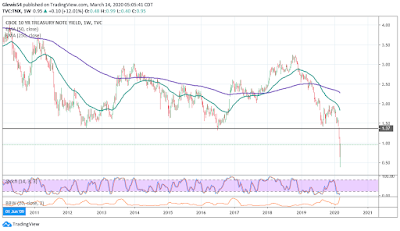 While I normally look at TLT and use it in my positioning, I am posting here a shot of the 10 year interest rate.  We can see that rates fell below a major support line and fell all the way to 0.66% before rebounding to 0.95%.

At the time rates were plummeting, seemed that the general thought that rates would go to 0.  The Federal Reserve entered the picture adding boatloads of additional liquidity.  While some commentary suggested that money was not going to create a vaccine for the current health threat, there may be other market stresses that are being ignored.  Many factors are causing stresses to the dollar supply and there appears to be a dollar shortage.  While don't have expertise in this area, my readings have shown that stresses in the oil market, as oil has sold off to $30 a barrel, have been one cause of concern. 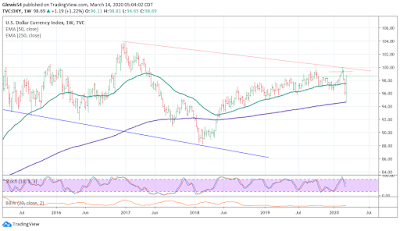 The DXY chart shows a big surge of some 3% this past week in the dollar.  But it's important to note that the long term trend is down and like the SPX in my last post, DXY is showing a similar three-week test of the highs, the failure leads to sell offs.  With lower interest rates continuing and massive amounts of liquidity, in my mind, the dollar is worthless.  Yet in the mix of world-wide fiat currencies, it is the "cleanest shirt in the laundry bag" so to speak.  Yet, it remains troubling to go to cash as it appears that the Fed may be "monetizing debt."  One would think that massive inflation is on the horizon.  But how can we protect against this?  I have no clue at this point.

I had, as many others, thought that gold would be the ultimate "safe haven." 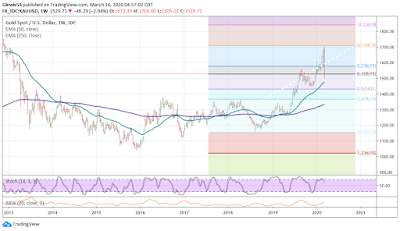 But like everything else, gold took a hit this week.  The only positive is that it held the .318 retracement level.

One concern is that we appear to have completed a 5-wave up leg.  It's clear to see from September 2018 to recently, 5 well defined waves, three up and two down.  Many gold bears contend that this was merely part of a correction with gold destined to drop below 1,000. 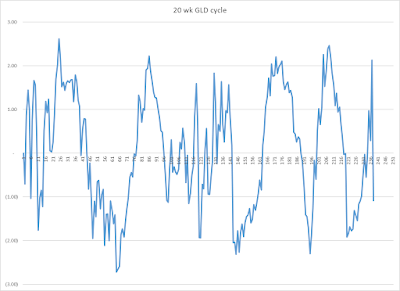 My Cycle chart offers no guidance other than that price is headed lower.  There are no other examples of the steep falling off of a cliff that we see in this chart.  One has to go with the Stochastics that are headed down in a more well-defined cycle.

As everything is going down, the general thought is deflation.  That is the worst news for the Fed, governments and corporations as the key way to get out of debt is to inflate it away.  This is not happening.  One can expect the Fed to be pumping more and more money into the system.  And while that should bode well for precious metals, there has been little logic to the metals market.

A big cause of this deflation is OIL! 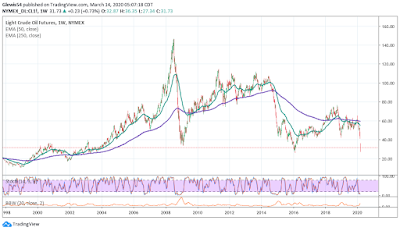 Oil prices dropped significantly as Russia and Saudi Arabia disagreed on production cuts.  Some have commented that some intent might have been to try to destroy the US Shale Oil industry which relies on higher prices to survive.

Years ago, I had thought that the shale industry would be toast as they needed prices from $80 - $100 to survive.  Yet news of massive debt defaults in the industry never crossed my desk.  It had been mentioned that the industry gained efficiencies and in the end, Zombie, debt-ridden corporations can ride things out indefinitely when interest rates are near 0% and the government is intent on maintaining the industry.  I have heard that President Trump is taking advantage of the low oil prices to fill up the strategic reserves.  While I don't intend to be political, Kudos to the president for taking this action.  I recall when President Bush was adding to the strategic reserves, it was when oil was at $140 a barrel. 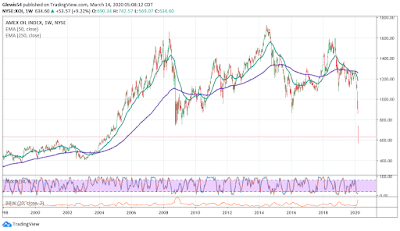 Similarly, oil stocks have been "clubbed . . ."  You probably know how the rest of that cliché goes.

I had been buying some oil stocks in this decline.  Timing wasn't exactly spot on but seeing what I had considered to be quality companies going for well under what I had hoped to buy them at previously prompted me to take action.

When I ran a derivatives department years ago, I mandated that my traders NEVER short oil.  Just too explosive a market to play with in my mind.  For the long term, it seemed like a good value proposition.  On the environmental front, I expect that companies will gravitate to clean energy as many have already been doing.  I don't think that the oil industry will go away.

Finally, on my stocks list, I mentioned that only three stocks were up in my universe.

I took a look at UPS.  Don't know the fundamentals but I assume cargo continues to fly. 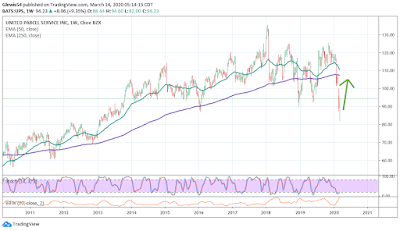 Looks to me that a bounce to the trendline could be possible.  Beyond that, one has to see how this market shake-out proceeds.

It rebounded nicely on Friday rising nearly 10% to close the week out with a slight gain.  Still at these levels, it appears to yield better than 4% on the dividend front.  Suppose that trying to buy dividends is also dicey (I had bought some OXY last week - ouch!!)  But what else can we do?  I don't have any answers.

In the end, the key is to stay diversified.  Again, our wealth is not accumulated due to market timing or stock selection, but asset allocation.  I'll try to dig up my presentations on this and add it to the blog site.  I'll also plan to add the risk assessment questionnaire to help you determine your risk, along with model portfolios based on your risk level.