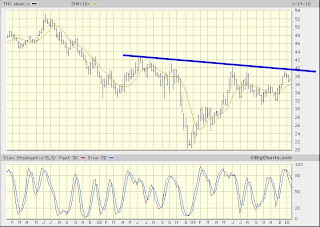 p
I've been talking about the US Dollar as a "flight to quality" move as the debt of Greece and other European nations have recently been downgraded by debt rating agencies. And it seemed that the dollar would have to stage some kind of upside move as everyone has been bearish on the dollar. The huge run on gold has shown that there is very little faith in the dollar as the printing presses in Washington have been operating at maximum capacity. But maybe, just maybe, the dollar move is foreshadowing a real move in the dollar, not caused by a global crisis, but instead, higher interest rates?

The dollar has been subdued not only by dilution coming from the printing of more money, but also by the extremely low interest rates kept in place by the Fed. What would happen though, if interest rates were to break out of these low levels and move to say 6% on the 10-year note? I'd bet that there would be a strong demand for the dollar. Is this possible?

It sure does look like it. The chart above clearly appears to be reflecting a reverse head and shoulders pattern. And with a low on the rates at 2% and the neckline at 4%, should 10 year rates break out above the 4% level, there is a strong chance, based on technicals, that the rates will move to 6%.

It appears that for now, rates may fall a bit further, especially if there is a "flight to safety" move going on. Or perhaps it is just trying to gather enough steam to push it through the strong 4% resistance that is sure to come.

No matter what, it appears that the dollar should be moving higher. Those of you who have married their gold position, be careful. You may be in for some great pain.