A sharply declining Euro currency added to an announcement by the Chinese government that they would be slowing credit activity to slow their rapidly surging economy. The combination led to stock market declines across the world with US investments in foreign markets getting hit the worst.

While a losing day is never pleasant for anyone, as the table above illustrates, the US did the best ending the day just down under 1%. Keep in mind that the instruments reflected in the tables are country ETFs, priced in dollars. Normal market losses are compounded by the strengthening of the US dollar. Most invest in international stocks to protect against a falling dollar. The US dollar however, has appeared to have reached a base and as illustrated earlier today, is showing a strong move up. One must always be careful about being too heavily invested in foreign stocks, gold and other hard assets as the US Dollar always shines in the time of any world crisis. The potential for a bankrupcy in Greece appears to have started such a move to safety.
SOME WINNERS
Despite a down day, a number of stocks showed pretty good strength included State Street Corp, discussed earlier today. Archer Daniels Midland, coming in at #9 today, was upgraded by Citigroup with a new target price of $37. 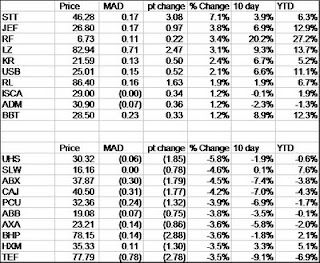