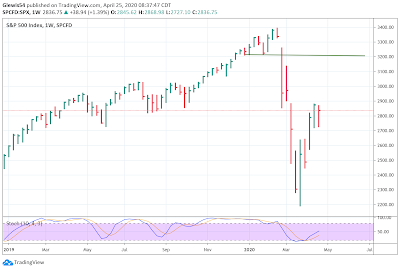 Stocks took a breather this week despite continued monetary stimulation from central banks across the globe.

Gold continued to shine, up over 2% on the week.  Bonds, represented by TLT also did well.  On the year, TLT is up 26%, outpacing Gold by 2X.

Decliners outpaced Advancing issues in my work Adv 55 - Dec 111.  Last week, it was 50/50 and the prior week, there were only 3 decliners.  While the averages are holding higher, the vast majority of stocks are reflecting more of the reality.  No one can possibly predict what is to come next.

Looking across the Americas, Latin America was hard hit, led by political turmoil in Brasil along with oil woes faced by Mexico. 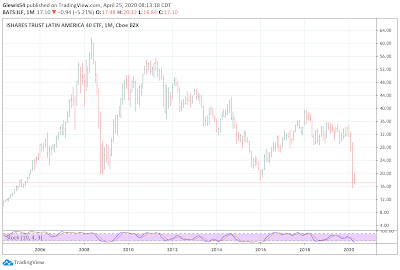 Latin American investors are looking at market valuations not seen in decades.

Not much was working in terms of broad based sectors.  But quite a few stocks were doing very well. 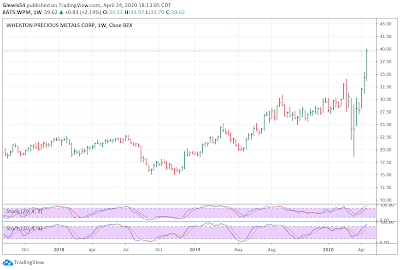 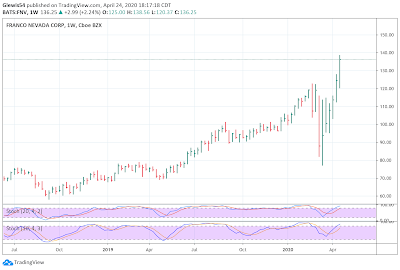 I continue to like and look for more opportunities to buy more should any sell-offs hit.  There is little doubt that even while the market prices of gold and silver continue to disappoint, these shares are getting noticed by buyers.  I have yet to hear anything though on the main stream market channels.  Once the mainstream catches on, the potential for considerably higher prices will be released. 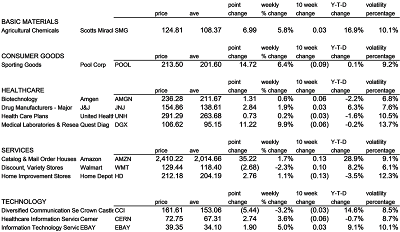 Healthcare, technology and services led the way but keep in mind that even in these sectors, most stock charts looked lackluster or hitting resistance. 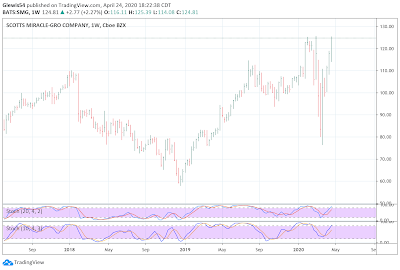 Momentum strong, looking as it might take out the highs.  Maybe it's waiting for Michigan seed sales to begin again. 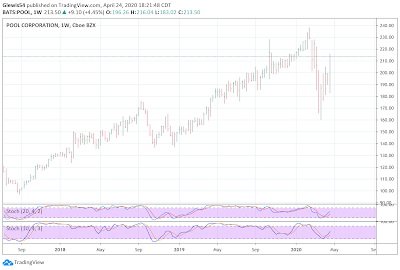 Picking up steam here.  Maybe if you can't go to the beach, you need to put in a home pool? 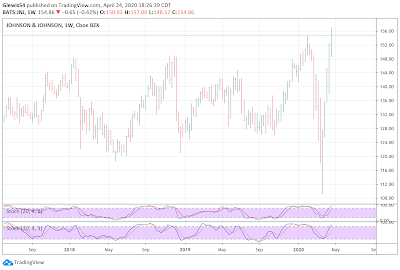 Healthcare stocks continue to make headlines for a multitude of reasons as corporations race to supply health care works, produce easy to use virus tests, and create vaccines.  Seems that in every event there are winners and losers if you are alert. 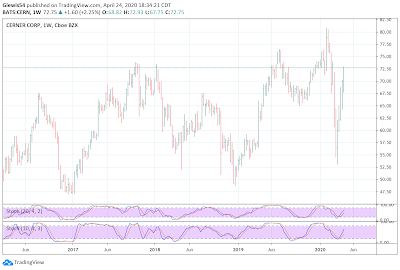 Quite a number of stocks in this sector that looked good.  I chose this one to illustrate as it appeared to have good momentum for hitting the highs.  Otherwise, technology overall appears to be highly valued so if you are a value investor, which probably no one is anymore, finding true value is pretty difficult

There was nothing that looked good in the Industrial, Finance and Utility sectors. 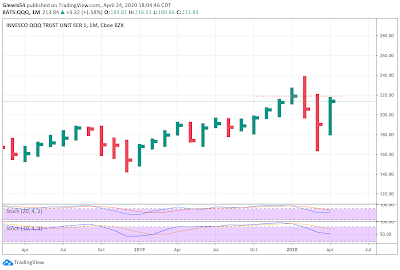 Those that have followed me over the years know that I look at 3-period tests of highs and lows to help confirm buy and sell signals.  Over the past 12 years, few sell signals manifested as stocks were in an ever ascending mode.  Terms such as the "Fed Put" always emerged as stocks continued to dazzle the trend followers.

We can see in this chart of QQQ, a proxy for the Tech sector, we are very close to the three month test of the high.  Thursday marks April 30 so next week's report will confirm if stocks are to continue rallying or if a tentative sell is issued.  I find it so interesting when I can watch the market closes around tests of highs and lows.  It's a real concept.  You can see the battle often raging between buyers and sellers at the critical closing price.

One thing that I am cautious about though is that while the January closing price is the highest closing price, prices did go higher in February but then closed lower.  So it's still possible that even if April's closing price was below January's, prices can still go higher in May, testing the ultimate top.

As the QQQ monthly close is but a few points away from January's close, it will be most interesting to see what happens here.  Tech has been the strongest sector by far. 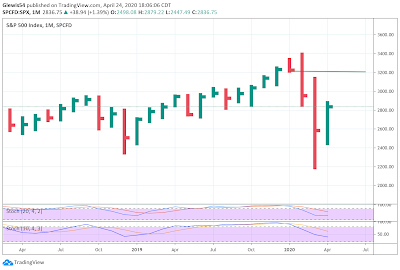 The S&P 500 chart is far below January's close so a massive move can be anticipated.  Crazy as it sounds, this is the formation set-up so I'd be cautious about shorting as we anticipate an unfathomable test of the high.

One key dynamic to watch is how much money central banks will be continuing to throw into the economies.  At some point though, the reality of what continued money creation will hit home.  What actually backs currencies?  Is it merely backed by the tax base? the government's ability to service debt?  With interest rates close to 0% and actually negative in other places in the world, Debt servicing may not be such an issue, especially if you are a country that can create more currency to pay that interest.

So many claim that there is no inflation.  Can you really believe that?  Highly educated economists actually say this, inflation is low or there is little chance of inflation.  I can only guess that these individuals earn so much money that the incremental shifts in prices are not noticed.

I don't know if you've looked at home prices.  I have started looking as I am anticipating that real estate will take a nose dive if the pandemic situation does not get resolved quickly.  I'll see a home that is tiny, perhaps a 2 bedroom one bath at most.  Basic basic.  I would think $125K tops?  Nope, try close to $300K.  This is insanity and fueled by all of the monetary stimulus to Federal Reserve has been injecting into the system.  Yes the asset prices go up because the money is there and it has to be invested less it total devalue into nothingness. 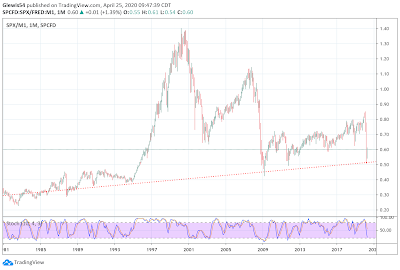 If we look at the value of the S&P 500 and take into consideration the amount of currency, as measured by M1, we can see that stocks have been going down ever since their peak in 2000

How sad it is that in reality, we are getting trashed.

I often am thinking, what can I do with the money?  Where can you invest it?  Is there any way that one can stay afloat? 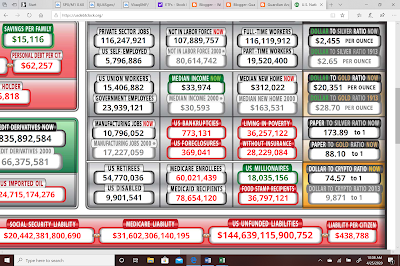 Why are prices so depressed?

There are 173 times the amount of physical silver in the silver "paper" market.  88 times in the gold market.

Someday, perhaps not in my lifetime, there will be reality.  Don't really see buying stocks as part of my reality, other than the gold/silver stocks that I had mentioned.