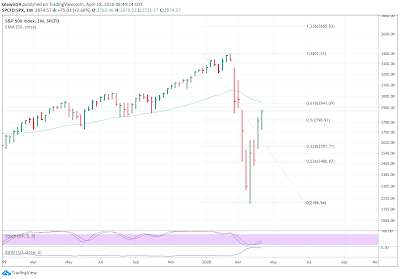 The advance/decline line went to neutral in my stock universe with 84 advances against 82 decliners.  Last week there were only 3 decliners.

When sorted by 10-week gains, I was surprised to see Wheaton Precious Metals leading the lot with a 20% move.  WPM has been one of my core holdings as I focus on precious metals and gold and silver stocks. 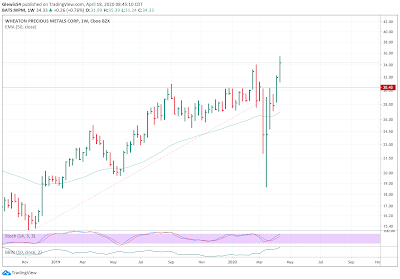 Wheaton is a gold and silver streamer.  Basically, it's a middle man that buys from the mines and sells to users.  It wasn't too long ago that the prices of both Wheaton and SLV (silver ETF) were the same.

Wheaton's price has doubled since then as SLV has declined some 10-20% from those levels. 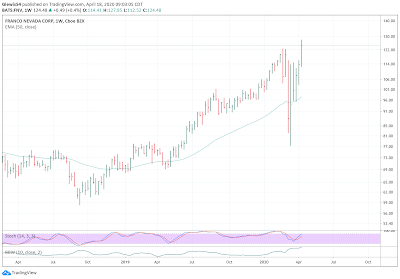 Had been hoping for it to drop in price to buy more but like stocks in general, prices have continued to rise.  Notice how these precious metals stocks are making new highs along with only a few of the leading tech stocks.

While I continue to look for some pull back in the precious metals sector, it as it is highly correlated with the movement in stocks in general, it has not provided a hedge to the overall stock market as one would expect in this sector. 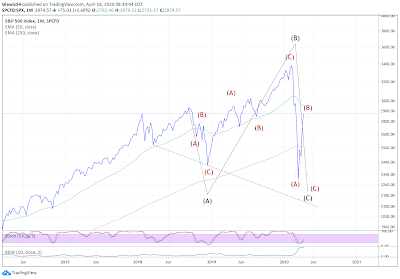 Still looking for some retracement perhaps testing the lows.  While stocks have continued to rally, the levels still are merely approaching a 50 week moving average and the .618 retracement.  Still is within the realm of a normal retracement.

I was looking at some different wave formations and am open to a new hypothesis.  Previously, I had been looking at the move from the highs as the First wave (A) down in a corrective phase.  Normally, a correction goes through an A-B-C correction phase before continuing along its merry way.  In reviewing a line chart, I was noticing how the last wave up may not have been a normal 5 wave Up move.  It might only been three waves and that would indicate that it might be part of a correction.  Corrective formations often go with a 3-3-3 or 3-3-5 wave count.  As we can see in the above chart, we could have had an a-b-c down for the big A followed by an a-b-c up for the Wave B and now can be on the final C wave.  This could be either an a-b-c or a five wave move down.  Elliott Wave analysis is not predictive but a historical perspective of waves.  Few agree on what the current wave structures are and often, those who have made historical analyses are often required to make revisions based on more recent moves.

So it's all a crap shoot so to speak.  Fundamentally, there is nothing to hang your hat on here.  The chatter is that stocks are looking out one year now but we all know the reality.  The economy is shut down to a large extent, some 20 million people or more have lost their jobs while millions more are in furlough status.  No one can predict what can come and for this reason, I am not currently in anything except for the gold and silver stocks along with a smattering of oil stocks that are horribly cheap.  Whether they will survive or not probably depends on who will win the presidential election in November.  The current president wants to preserve and enhance the oil sector to the point of being a net exporter.  The previous administration shut down coal and was less favorable to the oil industry to the point where law suits were considered over environmental concerns.

And that is more or less how I have been advising people all through the year.  Even at the highs, it seemed pretty likely that some event would happen to try to bring down the stock market in an effort to discredit the current president, who has flaunted the market highs as an indication of his great success.  The bottom line was, if you feel that the president can rebuild the economy quickly, then buy stocks.  It would be a vote for the president.  If you believe that he will fail and will lose the next election, then don't buy stocks.

My lack of conviction in the market is not a vote for or against the president, it is my general opinion that even from the 2009 to 2020 bull run, I have felt that the market is all smoke and mirrors, propped up by Federal Reserve stimulus, Computer-driven market activity, corporate buybacks and even foreign central bank stock buying.  With interest rates paying next to 0 and pensions and insurance companies moving to stocks to generate any kind of return, if the markets falter, the whole system will collapse, including my pensions.  Ugghhh.  I guess that's why I am an advocate of precious metals because if all else fails, and a continued collapse in stock prices might ensure that, what's left?

And the downside even there is that three times in the past, the US government has made it illegal to own gold.  At this point, I shake my head knowing the futility there is in trying to plan for the future.