Fed Returns to Boost Market - Will We Ever Have Reality Again? 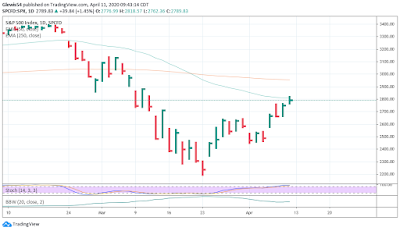 Stocks staged a massive rally this week with the S&P 500 rallying more than 300 points or 12.2% from the previous week.  Of special notes, REITS (real estate investment trusts) rallied the sharpest, rising 24%.  Midcap stocks which have been underperforming for quite a while also turned in stellar weeks, with the Midcap (MDY) and Russell 2000 (IWM) rising 18%.

From an industry perspective, all sectors of the market rallied. 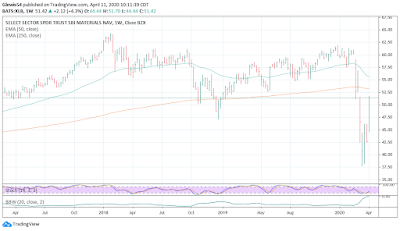 I had been paying close attention to a number of exchange-traded funds to gauge the health of the US economy.  It appeared to me that low interest debt had enabled businesses that might have failed in 2008-2009 to remain.  These had often been referred to as Zombie Corporations.  As interest rates continued to fall, businesses were able to issue more and more debt to stay afloat.  Eventually, some event would trigger this debt to default.  It was my thought that when these ETFs started to drop in price, it would be an indication of an impending recession. 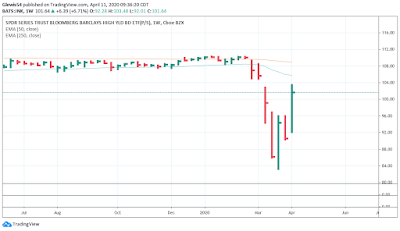 One of my proxies for this lower quality debt was an instrument with the ticker symbol JNK.  As the symbol implies, the debt held in this ETF is just that, junk.  You can see that this ETF price fell off a cliff.  There was a real possibility that heavily debt-ridden companies would go bankrupt.  But that reality quickly came to an end as the Fed announced that they would bail out not only quality corporations, but shaky corporations as well as states, counties and likely foreign banks and governments as well.  Soon the Fed will own the entire world.


Other ETFs that the Fed may now be buying include: 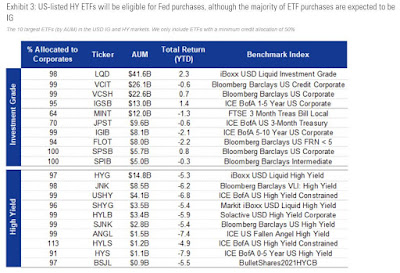 If the Federal Reserve Bank can buy these ETFs, and the Fed can’t lose money, then if could be foolish to try to fight the trend.  Or so it seems. 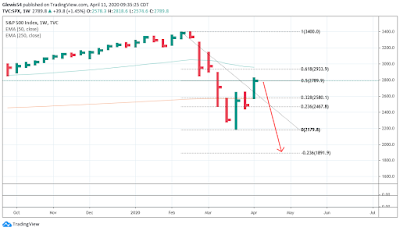 It's hard to imagine this to happen though.  Despite 16 million people filing for unemployment and businesses across the world being shut down, liquidity has always seemed to reign supreme, despite any fundamental support. 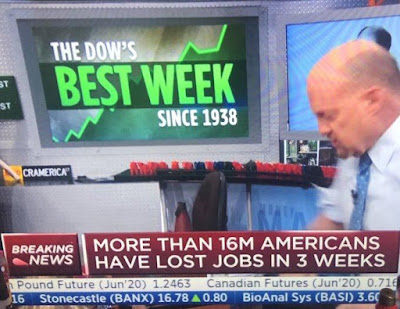 Once again, markets have no correlation with reality. 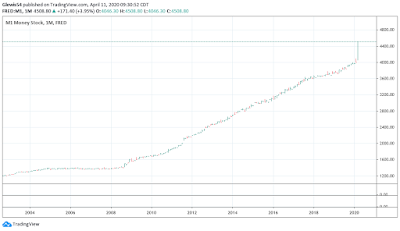 As the chart of the M1 money supply illustrates, money supply has been surging to dizzying heights, now backed not only by government treasuries but also a wide range of corporate bonds.  Some can interpret this as the Federal Reserve Bank and the US Treasury taking control over US corporations.


The increase in the money supply is said to be temporary and will be pulled back when things normalize.  But as we've seen post-2009, things never normalized.  Any attempt to decrease the money supply was met with swift negative market reactions.  This is the new reality, 0% interest rates, increasing Federal Reserve stimulus actions to keep the financial structure afloat; many suggesting that it won't be long until the Federal Reserve starts buying stocks.  Again, does it make any sense to fight the Fed?  It does appear to be inevitable.  But ultimately, must it fail?

I thought it might but after 11 years of the Fed-controlled market, I do not expect to see a normalization in my lifetime.  As such, I choose to stay out of stocks, except for special situations such as some gold and silver mining stocks.

I continue see gold still as a safe haven.  In times of loss of confidence in fiat currencies, gold stands out as one asset that can provide purchasing power. 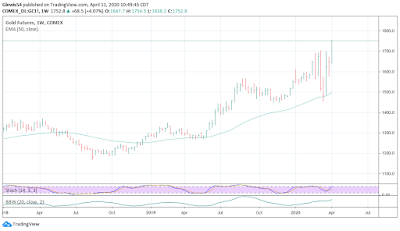 Gold futures rallied to new recent highs but still are a few hundred off of the lifetime highs.  One can expect gold to continue rallying and perhaps even silver following.

Inflations:  Gold and real estate are often said to be good hedges against inflation.  The sharp move in REITs this week along with gold making new highs supports this view.

Deflation:  How quickly will the economy recover?  Some suggest that things won't start getting back to normal in July, the President is pushing to get things moving as quickly as possible.  A slowing economy might present a deflation scenario.  Holding US dollars is often recommended to ride out this storm.

I suggest holding both.