Corrections vs Bear Market What to Expect Next

Review of indexes for the week.  Russell 2000 and Midcaps took the brunt of the sell-off, losing 6 to 7 percent.  REITS got whacked the hardest, down 10% on the week.  Longer term bonds held up as did gold but all in all, it was a poor week. 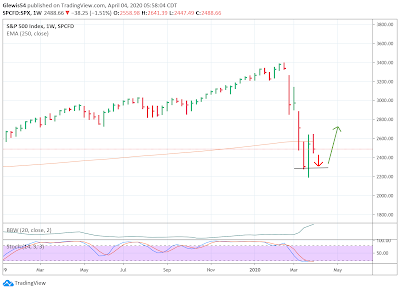 Projecting possible scenarios for next week, my first setup is a possible three week test of the low.  In this scenario, the closing price will test the 2305 level and hold. 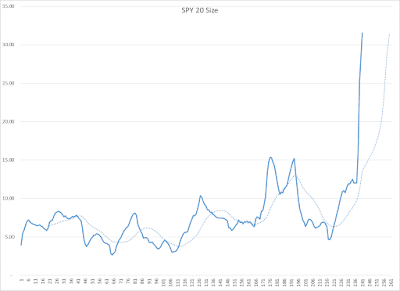 Looking at my Size indicator, there is no sign of the trend weakening, on the 20 week moving average.  I mentioned last week that the Size indicator on the 4 week average had reversed for a short-term pop, but if we look at SPY (the SPX ETF proxy), we can clearly see that price only bounced to the 4 week average and reversed.  This demonstrates the general rule that when Size reverses, it will likely revert to the mean. 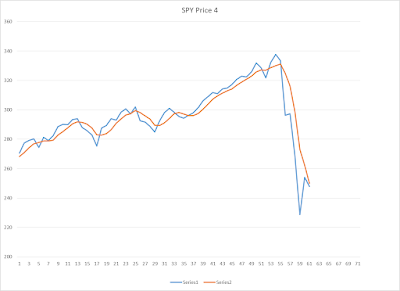 This generally shows that price could not get past the first barrier, the 4 week average, and will likely head lower. 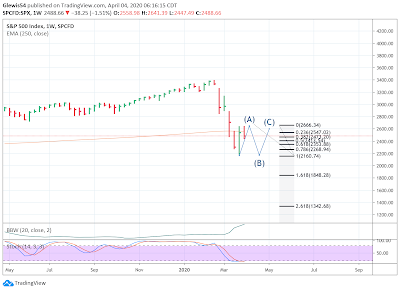 Another scenario, more favorable for traders, would be that stocks do an A-B-C correction phase, going sideways for several months before dropping lower.  As the Fibonacci projection level indicates, prices can drop down to the 1850 level or even 1350.  In an Elliott Wave theory world, this would be the completion of a Major A wave and would be followed by a B Wave, taking prices higher before making a final C wave lower.


Corrections can be ugly and long lasting. 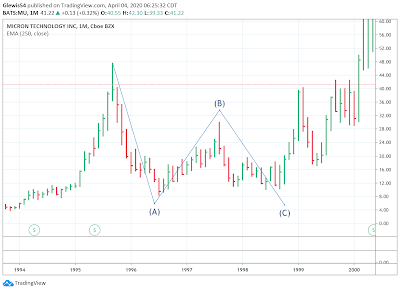 One example I like to look back on is Micron Technologies.  Tech stocks have seen their share of ups and downs.  From 1995 to 1999, Micron went through a garden variety correction, ranging from a high of 48 down to 8, more than 80%.  There was light at the end of the tunnel though as we see that Micron and tech stocks in general recovered and surged to new highs. 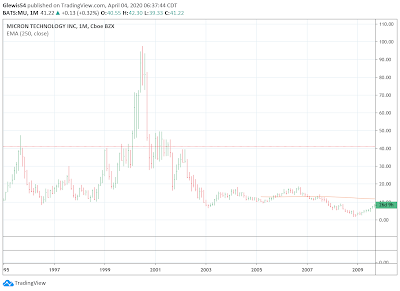 What came next however is what is commonly referred to as the Tech Bubble.  When that bubble burst, we can see that Micron dropped from close to 100 down to 30.  Eventually, price dropped close to 0 in this chart.  The decline lasted for more than a decade.

Needless to say, few of us alive have witnessed such a devastating decline in the overall stock market.  Over time, the stock market has tended to recover and move to new highs.  But some of us sceptics have noted that prices have been boosted by tremendous amounts of stimulus from the Federal Reserve.  With interest rates close to 0%, corporations, financial institutions and even Central Banks have been borrowing money and buying stocks.  The stock market is a “house of cards” built upon endless increases of debt.


The last time the “house of cards” collapsed might have been in the depression era.  How did stocks look then and if we follow the same scenario, what might we be able to anticipate? 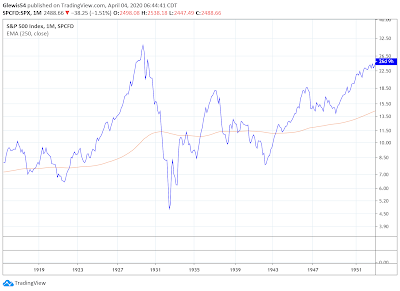 Here is what TradingView data presents for the SPX during the depression era.  Keep in mind that the S&P Index wasn’t actually developed until around 1985 I believe so how data is extrapolated is not clear.


But assuming that this data is valid, we can see that the first dip off of the highs went from 30 to 20, a 33% correction.  That's pretty consistent with what we've experienced thus far. 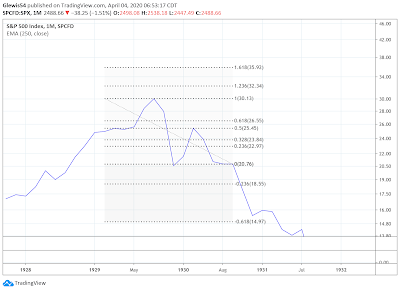 Stocks rebounded to the 50% before collapsing.  Prices stabilized for several months, probably encouraging many market bulls to proclaim, THE CORRECTION IS OVER!!. 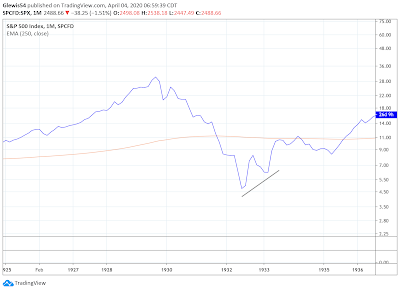 But as the long term chart shows, prices continued down for a total of three years falling from a monthly closing price of 30.10 down to 4.77.

It’s interesting to note that a bottom could have been declared after a Three Quarter Test of the Lows.


Where are we at now? 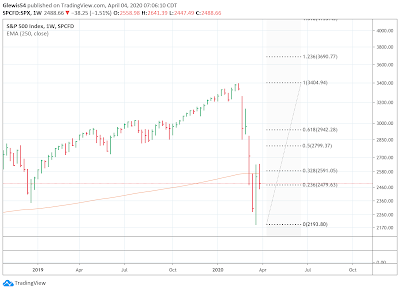 From a Fibonacci Retracement perspective, a .328 retracement is very weak.  We tried to get above that without much success.  A 50% retracement, similar to the bounce seen during the Depression would take us to close to 2800.  Prices could even reach to the .618 retracement level.  But without breaching these levels and holding, the bounces are just that, normal corrective bounces.  We can see even back in the Depression Days, prices followed these rules.  Like Gold, they have withstood the tests of time.


What do we do?  I had been buying physical gold and silver for the past four or five years.  Now if it is obtainable at all, the premiums have skyrocketed.  Mining, refining and transportation operations have come to a halt.  New supply is not expected to be forthcoming any time soon.  Like we see in general, few had been prepared for such a situation.  Even with the precious metals, it was clearly understood that the next phase of the economy would probably be a big deflation.  This would bring the prices of metals down along with everything else.  Many of the skeptics chided that they would then buy the gold and silver when the deflation occurred.  Who knew that the physicals would be unobtainable?

Preparation is the key.  While I would not categorize myself as a “prepper”, from a financial planning standpoint, I had tried to look at all of my areas of risk and add insurance for additional adverse events.

I lived in Cleveland around 2001-02 and remember that we had a blackout.  It lasted just a day but life was totally shut down.  No coffee to be had at the 7-11, cash machines did not work, credit cards did not work and worst of all, most cashiers did not have basic math skills to be able to make change!  It was only one day but there was nothing but chaos.  I thought, what would happen if this lasted for three days or five days?  How long would it take for civil unrest and a total melt down?  Not long.

No telling what may follow so I will give the same financial planning advice now that I was giving clients then.  Make sure you have a supply of currency on hand and not $100 bills.  Have what you need and enough change on hand to be precise in your transactions.  Second, I always encouraged having some silver ounces or small gold denominations.  People often ask me, what good is that?  Who is going to transact in gold or silver?  I don’t know but look at Venezuela?  We will only know when it turns out that having some gold and silver has value.  Dah, don’t dismiss the effects of sound financial planning because you can’t rationalize what might happen.  Of course, we can see now that if you didn’t do any of this pre-planning, getting gold or silver now might be difficult and that in itself might make it valuable.

Also have enough cash on hand to last you at least a month.  Keep it at home in a safe if necessary along with the gold and silver.  In such a situation, you may not be able to access your bank or your safe deposit box.


SDS for a Down Move


Playing a move down.  I put out a “go to cash” call during the past week as prices rebounded. Time to Sell  Looking at the retracement levels, it seemed prudent to go to cash.  While I see the potential for prices to go higher, based on the Fibonacci retracement levels, it just didn’t seem worth the risk to stay in the market.

I bought SDS as a way to play the move.  This is a 2X inverse product that moves up 2% for every 1% that the SPX moves down.  As a leveraged product, in times of low volatility, it may lose value.  There are also products that can move 3X so how you play it is up to you.  If you are a rookie, don’t play with instruments you don’t understand. 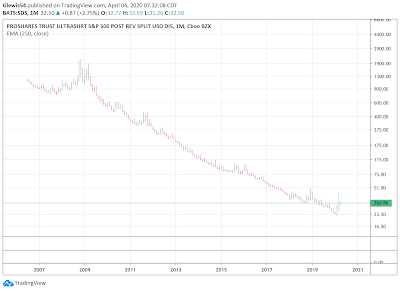 I add comments on things I see in the market on my Trading View page.  https://www.tradingview.com/u/Glewis54/  These posts also go to my Twitter feed.  https://twitter.com/AssetDesign