OK, You Voted Your Desires, Now Get Back "In Line"

Friday's dramatic market moves are totally baffling considering that the Brexit vote, which markets had been trading off of for days now, is really irrelevant.

It wasn't too long ago that the same thing happened in Greece.  The people had a chance to break away from the bondage of the EU and ECB and voted for it.  Now their punishment for disobedience has only increased.  When will they ever learn?

I can't believe that the UK will ever have the opportunity to break away from the EU and the power behind the curtain.  Consider that to even begin taking steps to move forward in this direction, it will have to wait for three months until David Cameron resigns as the UK PM and someone new comes in.  THEN, they will have TWO YEARS to put things into motion.  And then how much longer after that to establish the actual dissolution?  I doubt if I will even be alive then to see it, should it actually occur.

In the end, the bankers always win.  Even as the markets were being rattled, what was happening behind the scenes?  Central bankers were nimbly creating billions and billions more of fiat currency to provide liquidity in the event of margin calls.  And with interest rates very close to 0%, it's no problem to just go to the reservoir and borrow more free money to cover your losses.  After all, even if the markets should continue crashing, it's almost a certainty that the famous V-shaped recovery will again come in to save the day.

So I can't see any real reason why the markets would crash, unless the powers behind the scenes Will It.  The UK vote is Non-binding.  It's just one of those "bones" us minions are thrown every now and then to appease us.  Even here in the US, the recent Primary season let us know the truth.  Voters don't nominate a candidate, the party does.

For the week, US stocks were down slightly and remain negative for the year.  European stocks, generally represented with EAF, was down 5%.  A closer look at country funds within the EU showed considerable damage to the weaker members, Italy and Spain.

Precious metals again rose but as I had mentioned in other social media outlets last week, Silver looked to be hitting resistance.  I expect it to trade between 15 and 17 on SLV, offering some trading opportunities for those who have been accumulating positions at lower levels.  As prices surged above 17 on Friday, I sold some 17.5 call options in July.  Price couldn't hold the 17 level and fell back. 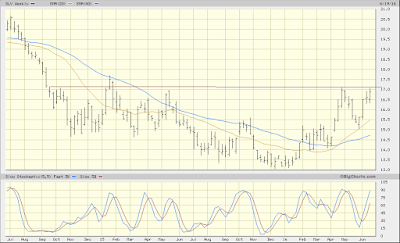 The 15-17 trade range is clearly seen here.  Often, trading patterns are symmetrical.  We can see that the SLV price traded between 17 and 15 from September to the following June, nine months.  If we continue this pattern, it's possible to see silver trade sideways until early next year!

But with the printing of hundreds of billions more dollars and Euros, and the potential for QE 4 in the US, I'm only selling options on 10-15% of my total position. I will be aggressively adding more physical silver and SLV to my portfolio as we test the rising trend lines.

We can see the dramatic fall in price on Friday, and on big volume.  We have to wait and see what happens starting Sunday night when the SP futures open up, along with foreign markets.

It could be that the rally from early February was just a rebound from the big move down that we saw at the end of the year and now we could be headed down further.

Many are predicting a big move down but I'm not so sure.  The weekly chart shows that we just coiled sideways after rebounding from the Jan lows.  Normally, this type of action is very bullish and I would buy the trendline.

I did sell some of my position in SDS (this is an Exchange Traded Fund that moves up 2% for each 1% that the SPX moves down).  But I only sold about 20%.

I added to the "bearish" position on Wednesday when I read in ZeroHedge the reason why the odds on the Brexit vote changed so much.

It appeared that after one British politician was assassinated, the atmosphere about the UK leaving had changed and that Remain was taking charge.  This was spotlighted with massive coverage of the Odds.  Apparently, there is big time betting there on political outcomes.  Suddenly the odds had changed, in favor of remain.  Markets across the globe began rallying and the US market came within a heartbeat of new ALL TIME HIGHS!  but a closer read into the ODDS which appeared to be driving the market showed that 75% of the bets made were for LEAVE while only 25% of the bets were for REMAIN!  Those that were betting REMAIN were betting big!  Big enough to considerably change the odds.  But unfortunately, when it comes to voting, the vote of one rich man equals the vote of one regular guy (at least in theory).  THOSE DOGS I exclaimed, they are rigging the markets by reshaping to odds.  I immediately increased my Bearish position.

So I might do a little buying should the markets continue to tank next week.  I was looking at some of these European Exchange Traded Funds (ETF).  I get it that fundamentals have been deteriorating for years now.  I think that the markets have every reason to go lower, even by 30% or more, and that wouldn't be abnormal.

I'm interested in EWL, the ETF that covers Switzerland.

We shall see how the markets play out in the coming weeks.  On one hand, I see that any violent sell off will be quickly bid up.  There's no doubt in my mind that Central Banks around the world are big owners of stocks in the US market.  This has more or less made the US stock market TOO BIG TO FAIL.  Central Banks just have too much skin in the game at this point.  If the markets really fell to where they should be, currency systems around the world would become insolvent with only gold and silver benefitting.

So with that in mind, I'll be picking up bargains, if I see any.  Good luck.  Should be exciting times coming.  But in the end, remember, it's all fiction.  If the UK does leave, it won't happen for at least another 4 years.