Stocks around the world declined this past week, led by European shares.  US shares, despite joining in the sell-off on Friday, declined only slightly. 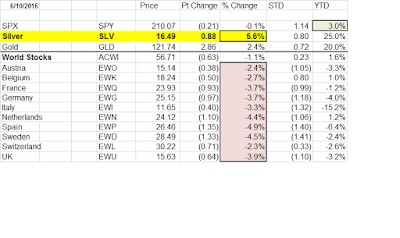 As mentioned last week, Silver was looking like it was ready to pop and sure enough, it did, rising more than 5% this week.

More European bond buying by the ECB appeared to be the stimulus for the sell-off.  They will begin buying corporate bonds in a continuing effort to stimulate the economy.

In the past, more free money boosted stocks but over time, the effects have been less and less.  This week, a typical European market looked like this:

More Central Bank meetings coming up next week, including one with the US Federal Reserve Bank.  What can be said about that?  Doesn't really matter what Janet Yellen says, computer trading programs react to any comment with buy programs boosting prices back up to the highs.  Usually the volume is so light that it leaves many scratching their heads.

Don't have the precise info in front of me, but reports have shown that Hedge Funds and Major Banks have been net sellers for the past 18 weeks, yet US stocks continue to hover close to the highs.  WHO'S BUYING?  is the big question.  Can't say that I actually know, but as mentioned last week, it had been reported that the group Anonymous hacked into the Federal Reserve trading accounts and found that it is the Fed that is accumulating massive positions in an effort to keep the markets up.  Other reports have speculated that should European markets continue lower, the ECB will be buying stocks aggressively. 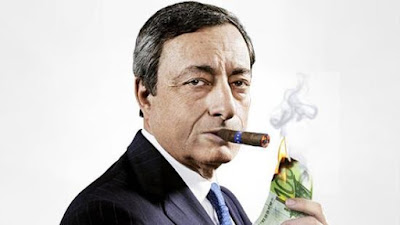 It's wonderful when you "have money to burn."

We may never know until it's too late but if the Central Banks are truly buying stocks with money created out of thin air, can equities really have a value?

It is a bit disturbing if one considers the consequences.

There was a time when there was a correlation between interest rates and the stock market.  I first started blogging about it in 2005 when rates started moving lower while the market moved higher.

It got pretty crazy there for awhile but then rates and the markets did come back together and in a hurry!

Isn't it interesting that the SP 500 dropped dramatically to match up with the interest rate?  Notice the very strong correlation between the two until external forces began trying to repeal the market cycle.

It certainly looks very "discomforting."  Notice that rates are even lower now than when the market melted down in 2008-2009.

It seems to be understood that there will be "pain" when interest rates rise.  How much pain is hard to say.  Those who do not consider the fall out that will occur when rates do rise may suffer substantially.

While Central Banks fight the good fight to get things moving again, nothing really has seemed to work.  Many who study the world demographics will attest to the fact that many important populations around the globe are aging and are not spending at high enough levels to stimulate the economy.  Business formation continues to decline as increasing levels of regulation add to the cost burden of starting a business.  Yet just sitting on low interest rates much longer will have horrible consequences.  As we've seen recently, pension funds cannot operate in a zero interest rate world.  I read that the Teamster's pension amounts will have to be lowered to just $35 for each year worked, meaning that a worker who had put in 30 years will only be getting $1,000 a month in pension benefits.  Good luck with that!  Insurance companies cannot honor their obligations either.

As mentioned, the Fed will be meeting this week and then next week, the long awaited Brexit vote.  I can only ask, "what difference does it make?"  Not long ago, Greece held a vote to escape the clutches of the European Union and voted to exit.  What did the government do?  Nothing.

UK can vote to exit, but it won't matter.  The game will play on until one morning we wake up with the news.  GAME OVER!
Labels: Asset Design Center, Brexit, Gary Lewis, interest rates, silver, SPX, Stock market analysis, TNX