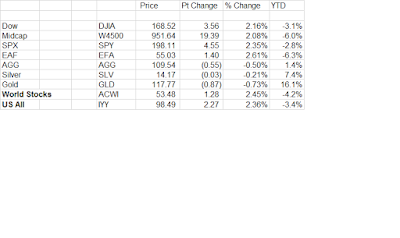 Big day in the market today with prices surging over 2%, across the board.

As mentioned last time, it appeared that SPY could surge as high as 207, another 9 points but there is some strong resistance overhead. 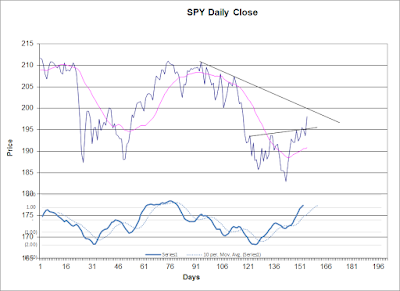 As seen here, there is apparent resistance around 200.  Should SPY surge beyond that, there is yet another target before 207.

Notice the "gap" from 202 to 204 occurring when the downtrend began.  This would be a likely "next" target should price break above 200.  Definite point to position yourself for some downside move.  Hard to say how low the next downtrend will go.

This could merely be a very sharp rally in a bear market, as many are predicting.  As we know though, when too many are calling for the same outcome, the masses are usually wrong.  I was very skeptical when sentiment turned bearish so quickly.  That got me thinking that we could possibly go to all time highs.  Anything is possible.
Labels: Asset Design Center, Bear Market, Gary Lewis, SPX, SPY, Stock market analysis, uptrend