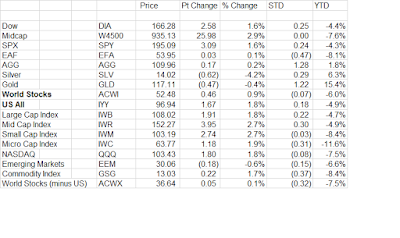 The market continued rebounding this week with major averages rallying briskly.  SPY closed up more than 3 points on the week, 1.6%.  Gold eased slightly but silver melted down more than 4%.

I mentioned last week that the 20 day average could provide support on the downside and that is exactly what we saw.  The market dropped to the 190 level but then immediately reversed and began the next move up.

While the market turned down on Friday, it does appear that this action was merely testing the breakout level of a possible reverse head and shoulders chart formation. 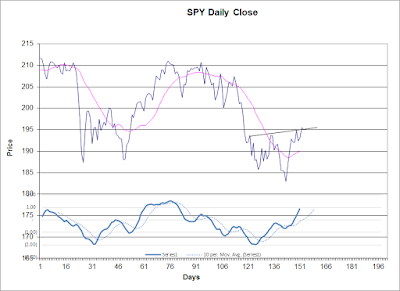 While my line drawing is crude, it does appear that on Thursday, price closed above the line connecting recent highs.  This line had previously served as a resistance level but on Friday, it proved to be support.  If this is true, then one can expect price to continue rising about 12 more points, or up to 207 on the SPY.

The weekly bar chart shows price continuing to rise to the trend line.  The Stochastics indicator on the bottom of the chart shows that momentum continues sharply to the upside, indicating further positive price movement.

One of my derivative charts also lends support to the continuation of upward price movement. 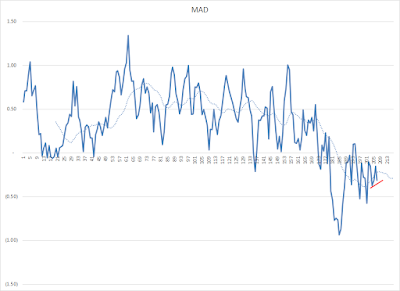 This chart reveals the weekly change in the 20 week moving average.  If you see where I drew the red line, observe a three week test of a low point in this indicator, implying that next week, the indicator will move higher possibly into positive territory, meaning that the moving average, after falling since last August, will now be rising!  Is it the start of something bigger?

Most everyone is on board for a continued move down.  At the moment, the only indicator that I have that shows that the downtrend might resume is the Size indicator, or my measurement of volatility. 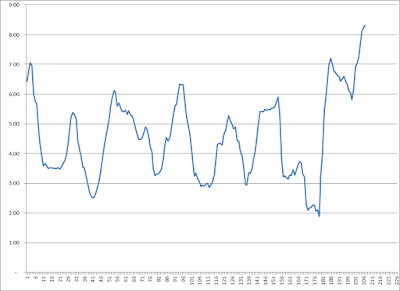 As mentioned, the rule is, as Size increases, stay with the trend.  But as mentioned above, the trend might turn as soon as next week.

Fact is, I've never seen size this large.  My current weekly data covers some four to five years.  While the number, 8.31, is the largest, in percentage terms, Size as a percentage of price, is starting to go down.  Two weeks ago, Size, as a percentage, peaked at 4.35%.  It reversed the following week to 4.29% and this week, it closed at 4.26%. 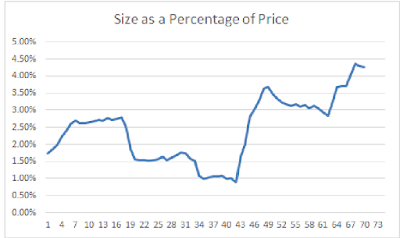 Here's what that chart looks like.  The previous peak, at 3.69% occurred during the August meltdown last year.

So as an aside, it's interesting to note that the VIX index, an index of volatility based on option prices, does not reflect this increased volatility.

What does this mean? Imply?  Could be that options are cheap compared to the amount of risk that's currently in the market.

In summary, it looks like prices will continue higher, based on the breakout and test of the inverse head and shoulders formation and the change in moving average graph.