In my last posting, I mentioned that the coming two Fridays would be "telling" in my world.  On Friday, January 29, we would be testing the August closing low on the monthly basis.  A successful monthly test of the lows is quite rare and could indicate a long-term basing formation.

The monthly line chart shows this successful test here.  The closing low for January was not below the August low.

What does this mean?  Simply this.  If you don't look at the market on a day-to-day basis, but only once a month, at the end of the month, it is my expectation that going forward, the market will be up.

While most seem to be guessing that the worst is still yet to come, I believe that there is a good shot for the Standard and Poor's 500 index and the accompanying Exchange Traded Fund (EFT), SPY, to go to new highs.  That surely would leave most scratching their heads.

The next important test was completed yesterday with the three week test of the low.

This, being a weekly indicator, in an intermediate-term signal, where the monthly test is a long-term signal.  I can recently remember that last year, we got a three month test of the HIGH, followed by a three week test of the high and then finally a three day test of the high before the market started going down.  It was as if the market just didn't want to go down and was trying every conceivable way to continue going up.

This is the weekly line chart showing the recent test of the low.  If you look to the left, you can see that we previously had a similar formation, a three week test of the low that marked the bottom before a rally to the top of the range.

Of note, after the last three week test of the low, the market dropped significantly the following Monday but that was it.  The market then rallied for the next 6-7 weeks.

One must keep in mind but one important thing and that is that the weekly momentum is still increasing.

My general rule is that when the Volatility Levels are increasing, you need to stick with the trend.

This chart is the 20 week volatility measurements.  It is at its highest point and expanding.  That is a troubling indicator.

But if I look at shorter time frames, volatility is decreasing. 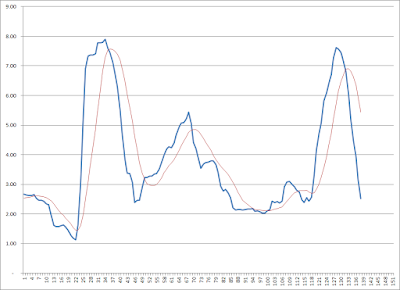 This is the 20 day volatility level.  And even though it appears that market volatility has been high because of the large point moves, this can be deceiving.

How else can we look at this volatility level?

One way is by viewing a chart of the Bollinger Bands. 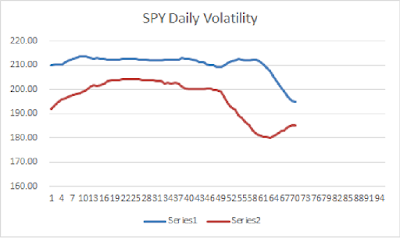 Look at how these bands are moving together.  From this chart, we can expect that the daily fluctuations would range between 185 and 195 on SPY, translating to roughly 1850 and 1950 on the S&P 500 index. 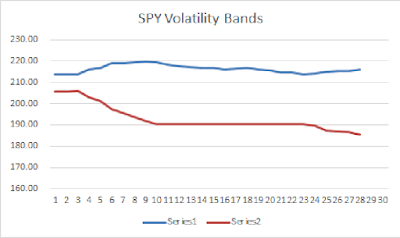 The weekly bands show that the realm of possibilities range from 185 (we are currently at 188) to a high of 216.

The all time weekly close high was 212.99 so there is some possibility that the market could go to all time highs here.  And if it did, it would happen in a hurry as the volatility levels are high.

If we would see the market move higher at an orderly pace, then the volatility levels would diminish and the possibility of new highs would also diminish.

Many are saying that earnings are dismal, the Federal Reserve is no longer accommodative, etc.  But for the past couple of years, I have believed that the market would collapse because the reality of the market being an actual market has disappeared.  That reality has not returned.  The market is a casino, in my opinion, with the High Frequency Traders and institutions continually gaming the system.  Even Congress can trade based on secret information they receive.  Not too long ago, a vote came up to prohibit "insider trading for Congress" but that measure was soundly defeated.

You must realize that the cards are stacked against you if you wish to be involved in the markets.  You must buy low and sell high.  If you are not willing to be nimble, then I suggest that you shouldn't really be in the markets.

The risk of collapse is too great and when the collapse does happen, there will be no way for you to escape, unless you hedge your positions.

Think about it.  If you have other sources of wealth, do you not protect them with insurance?  Of course you do.  You determine a deductible that you can afford and protect the rest with insurance.  Your investments should be no different.  You can protect yourself.