One such view is the rate of change in the 20 day moving average. 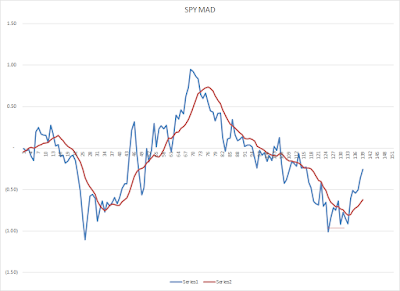 As you can see, this measurement appears to be rallying after making a three period test of the low several days ago.  It is now well above the 10 period moving average, which is now rising.

I broadened the view to see what was happening with price the last time such action took place.

I found that yes, SPY was working on a base at this time. 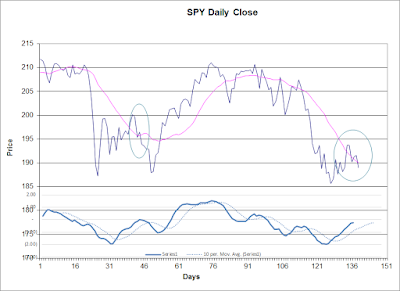 I have circled the areas on the price chart that coincide with the MAD bottoming cycles.  As you might see, the last time MAD was rallying, price was bouncing around the 20 day moving average, just as it has been doing now.  Price continued down but successfully tested the lows.  This was the last three week test of the low process in August.

Will the market do exactly what it did last time?  No one can ever say.  But in my world, I often get signals based on derivative charts of price.  Sometimes they lead as in this case.

So it's safe to expect that there might be some further testing of the recent lows, but the MAD chart along with some other indicators I watch imply that the downward momentum is diminishing for the moment.

This is the daily bar chart of SPY.  I'll be watching this week to see if the market can attack the previous low at the 181 level.  If so, it will present a long term buying opportunity below the 40 month moving average.

While some question this indicator, I have used it for more than 30 years and it has proven to be a very good measurement of fair value over the long term.  I will probably be adding again to my long term SPY position at or below 185.