My morning commentary discussed how a 62% Fibonacci retracement would bring SPY to 195.48.  For most of the day, SPY attacked this level, often falling back.  In the end though, the Bulls managed to push SPY through that level, closing at 195.55.  But then as soon as the closing bell rang, after hours trading pushed SPY up.  No telling what news could have added more impetus to the already overbought market. 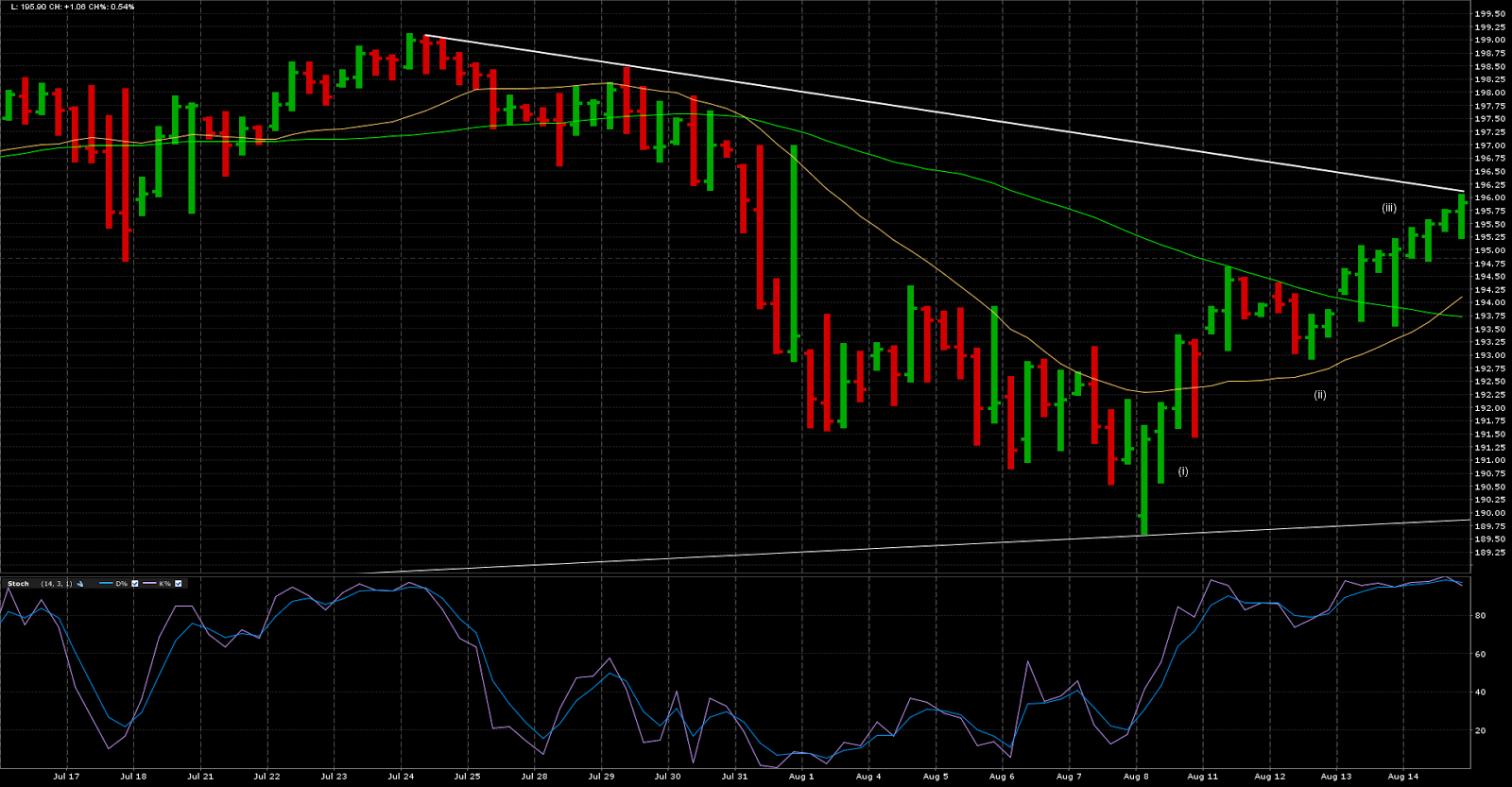 The next solid resistance comes just slightly above 196.00.  As we see, the level has been attacked (in after hours trading) but thus far, appears to be holding.

If you click on the chart to enlarge it, you will see that I added some small Roman numerals to indicate what some believe the current wave count is.  This move would be wave (iii) of Wave 5, the final wave, of this Bull Market move.  Estimates of the ultimate high (wave v of Major Wave 5) come in anywhere from 200 to 220.  To see some well done wave counts, I refer you to http://caldaro.wordpress.com/ or http://danericselliottwaves.blogspot.com/.

As the Stochastics indicator on the bottom of the chart shows, price action has been very strong and has been trying to roll over and fall.  If the wave count is correct, the fall will be very minor and will be a mere pause in wave (iii).  A breakout above the solid overhead line will probably mean that the market will test the highs and most likely continue moving much higher.

Part of the news today driving the markets was economic weakness in Europe.  There is no growth happening in Europe despite negative interest rates in Germany.  China's economy is also exhibiting weakness.  Based on this news, US interest rates fell dramatically today, indicating that the world will continue to be awash with cheap money.  Despite any perceived strength in the US economy, the Federal Reserve will be cautious to raise interest rates any time soon.

The stock market is built on cheap credit and the cheap credit will be continuing indefinitely.  So hold on tight and make sure that you have some calls or other bullish position in your portfolio to take advantage of what is sure to be a quick move to new highs.

That being said, keep a few puts on hand as well.  There are still a few in the camp that this current move is a mere part of the consolidation of the recent selloff and that the selloff will soon resume.