Stocks and bonds surged this morning as the long awaited non-farms payroll data for May was released. Results were more positive than expected at a minus 345,000. If the job numbers continue to improve at this rate, by the end of the year, the economy and job picture should be roaring. I had better get my resume polished up!;->

Interest rates especially surged across the board with 2 year rates rising to 1.19% and 10 year rates approaching 4%. Many fear that the spread between these two rates indicates that there is significant inflation ahead however the Fed Chairman Ben Bernanke assured us this week in his testimony before Congress that he is up to the task of preventing inflation. For this to occur though, a significant tightening of the money supply must begin now. And even though the jobs number strengthened over recent months, how will the automotive bankruptcies affect the job numbers in the future? How will the higher interest rates affect individual's ability to manage their budgets as credit card rates continue to advance, mortgage rates soar and capital becomes less and less available. 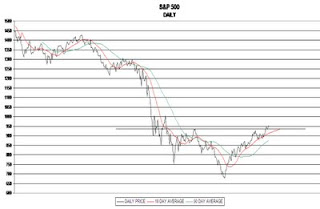 S&P 500 is breaking out from a significant base. There has been no retracement and test of the lows. Soon, it appears that the markets will be back to where they were prior to the big selloff. Advocates of the buy and hold strategy will rejoice. It doesn't matter what the economic fundamentals indicate. It doesn't matter that still millions and millions are jobless and many more continue to lose their homes. This is a capitalistic society, not socialistic. It doesn't really matter about the common people. It's all about capital. The Fed has injected trillions more dollars into the system expanding the game even more. With all these chips on the table, those holding the chips are making bigger and riskier bets.

Obama says that he is going to eliminate the wild fluctuations in the market, but I've got to tell you, before the jobs report was released, I felt as if I were in Las Vegas or waiting for a lottery drawing. Did I bet right? Do I hold a winning number? S&P futures soared nearly 20 points on the news. The S&P mini contract which allows you to take advantage of the index movement times 50 at a margin requirement of about 6,000, moved nearly 20 points! This is a quick $1,000 return on a $6,000 bet! Not bad. The ten year future play did even better. 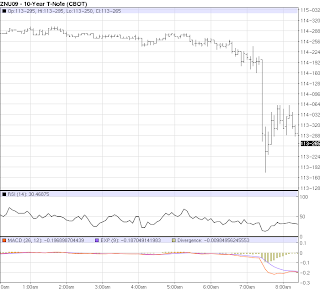 The ten year note future plunged a full point on the news. This is also worth $1,000profit if you bet right. You only need to put up $3,000! Hey I love it. I'm a player but this is how it is now. This is truly a casino and anyone who looks at it any differently, well, I guess that's what makes it a market.