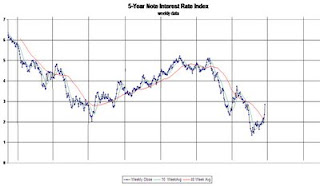 Much of our time has been spent reviewing the 10 year rate since this is the rate associated with the mortgage market and is of the greatest interest to this audience. Quite a few other maturities also trade. When all of these rates are viewed in aggregate, they form the Yield Curve. Many economists look at the slope of the yield curve, that is the difference between short term maturities and long term maturities to forecast the country's future economic condition.

Normally, the shorter end of the yield curve is not as volatile as the long end but today, that changed. Notice the surge in the 5-year rate this week. It rallied today to close up 0.506% on the week to 2.853%. This compares to the 10-year rate which rose 0.397% and the 30-year rate 0.318%. The flattening of the yield curve caught the attention of almost all analysts today, some suggesting that it marks the end of the recession while others claim that it proves inflation is coming. 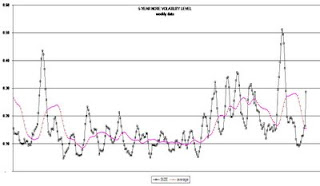 As always, we focus on Size or our measurement of volatility to guide us. We can see from the above chart that Size previously spiked when rates tumbled as the world flocked to US government securities as a safety trade. It's quite possible that Size could reach it's previous peak and "no one wants to be the last one out!." Who could not have known from the beginning that the government security trade was just another Bubble. As a result, our commentary all year has been focused on the weakening dollar and higher rates. 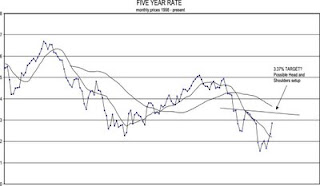 If you subscribe to the Trendsetter Market Report, you might recognize the same formation (reverse head and shoulders) that we thought could build on the 10-year note with the neckline forming slightly above 4%. Here, it appears that the 3.37% area seems to be a likely target for expanding rates. There it would also meet with the all-powerful 40 month moving average and could likely back down to form the right shoulder.

This is just a guess though. We know that when markets start moving, they feed on themselves. You can throw all charts out the window. Don't bet against the trend, especially when Size is rising.