Cycles Indicate Top is In 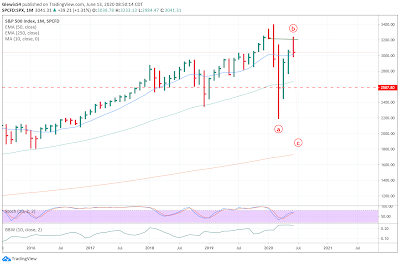 No need to comment on things that have been going on over the past few weeks.  Craziness to the max.  Suffice it to say that no indicator or past experience has been able to lend any thoughts to what can come.

Despite the euphoria that saturated markets, including the tremendous bid in companies that had already declared bankrupcy, I continue to hold on to the idea that we are in a B wave of a corrective phase.

June had been targeted for the three month test of the low but as it is now mid-month already, it may drag out even further into July or beyond.  As others have confessed, I also am truly humbled by the magnitude and consistency of the bid in the market.  I step back in awe but am truly aware that making millions in the market, that is driven solely through increasing debt and currency devaluation means absolutely nothing.  While not professing to be a socialist by any means, the value of our and other currencies are truly nonexistent.  When my bank account shows excess, I can't wait to get rid of it either by hiring those poor souls who worship this green paper and will sacrifice their time and energy as a way to obtaining it.  How sad is it that they don't realize that governments, corporations and well-off individuals can obtain as much of it as they wish at no cost.  Even to the extent that governments and banks are begging them to take more.  Yet these poor souls sacrifice time away from their spouses and children, away from their friends and loved ones, to enter into servitude for  something that has little true value.

So I digress of course as I see the further decline in the markets to be tumultous.  Even on Friday as the markets appeared to be opening down, I heard that the Treasury Secretary was vowing to add another $trillion to the market/economy or whatever/wherever this money is to go.  There is desperation in the air. 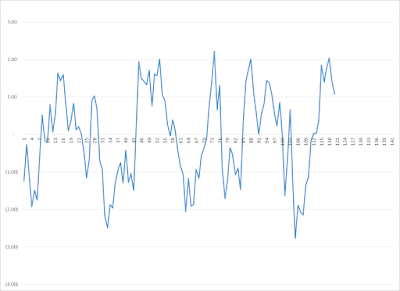 My only evidence that I will put forth in my prediction in lower prices is evidence that a cycle indicator that I conjured up out of various bits of market data has turned the corner.  Last week marked perhaps the top.  It was a three week test of the peak and it exceeded the previous peak.  That often would lead me to suggest that a top is not yet in.  But there is little doubt in my decades-long work that the market is as overvalued as I had ever seen.  The strength of the move has been without comparison, perhaps in my lifetime or at the very least, since I became a serious student of the market after 1988.  I do follow the cycles very closely and while price does not often move in dramatic fashion as these cycles fluctuate, it is a good guide to be selling call premium instead of put premium or lighten up on bull positions and even double down with SDS, DXD, and other leveraged inverse market instruments.

I have been dead wrong in my last calls for the top.  Few people ever get it right.  My down positions were mere pilot positions.  As despair filled my soul with these ever greater moves higher, I exited everything but on Friday, again established a position in SDS.  The inverse for the Russell 2000 may have been the best option as this segment of the market has shown to be the weakest.  Yet even in the past weeks, it has begun to move higher with the final nail in the coffin being the sudden run up in bankrupt companies.  Can anything signal a top and euphoria more than a rush into worthless bankrupt companies?  Now I have seen it all, beyond imagination. 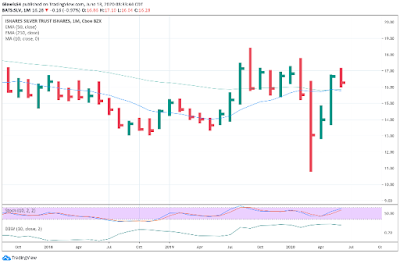 While I continue to be a fan of the precious metals and continue to buy the physicals, now that they are a bit more available, albeit at prices reflecting larger premiums, the paper silver appears to be moving in line with stocks.

Even though the overall pattern might have played out a bit differently, the looks are pretty much the same.  With this in mind, I think that Silver also can head down in a three month test of the low.  It might play out along even further into July.
It is not lost on me however that if we don't have a serious move down, we may be setting up a very meaningful reverse head and shoulders formation.  It is not lost on me that my predictive powers as of late have been nil.  I play the paper side of metals holding long term bull spreads topping at 25.  These are not traded.  Also the physicals are the foundation that are also never traded or hedged.  Other long calls and puts are spread off on weekly bases generating income.  Also a bag of short 12 calls are on hand should we get that dramatic move down to test or exceed the lows.

I'm pretty amazed at how well the metals have held up in the paper market though.  Dips appear to have been bought up.  That is something that few of us have experienced in a very long time.  So with complacency setting in, I want to ensure that I maintain these deep in the money shorts because big silver slam downs are more of the norm than what we are seeing these past weeks.

It's surely been quite a ride.  Have to say that I lost a little on the stock upmove.  Since 2008, I have not been a believer in stocks.  But I am not distressed at all of the money I could have made.  My only fear is that the money that I do maintain might have any value at all in the years to come.  What is next in this world, I don't have a clue.