Stocks continued to defy gravity rising ever higher with tech stocks even making new highs!  As the table shows, DIA, a Dow 30 ETF, rose 3.9% this week.  Dollar sensitive instruments such as EFA, a basket of foreign stocks, and SLV (silver) rose 4% or more.  Bonds (TLT) and gold (GLD) eased slightly after running up significantly for the year.  TLT remains up 20.7% (not including dividends) while gold continues with a strong year, up 14%. 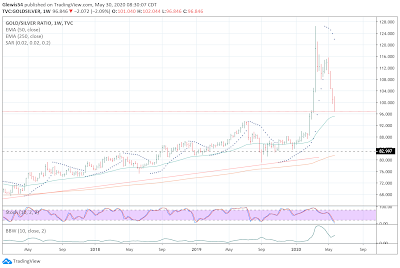 From a recent high of 126.43 ounces of silver to 1 ounce of gold, the ratio fell better than 4% this week to a more reasonable 96.846.  There appears to be strong long term support at the 81 level but many of us believe that this ratio has long been out of alignment with reality.  Current reports from silver miners indicate that the actual ratio of silver coming out of the ground to gold is 8:1.  Historically, through the centuries historically, silver has had a 15:1 ratio to gold.  As for many centuries, silver has been used as currency, this weighting may have been designated by things other than mining statistics. 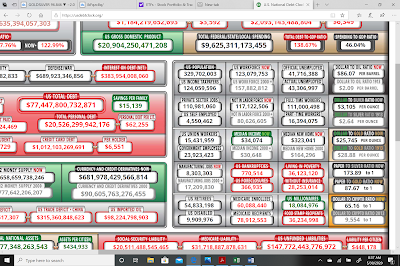 Where can Stocks Go? 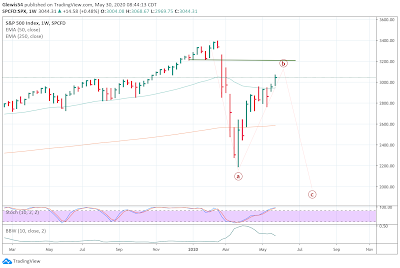 I still contend that we are in a correction phase of the market but again, I continue to be proven wrong, just as I have been for the last 12 years!!!  I often think of how silly it is for me to write a blog using any form of analysis other than Federal Reserve Actions. 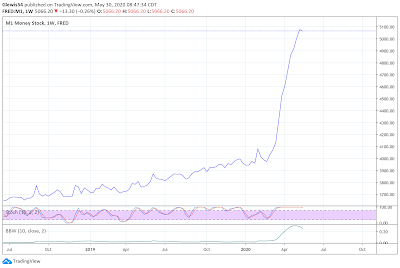 “Money Printing” is off the charts.  The markets dismiss how worthless the US dollar is so putting a price on anything is so misleading.  If my stock portfolio is worth $1 million dollars, it might as well be $1 million in Monopoly money.  It is insignificant.  When one looks at a value of the stock market in terms of this money printing, we can see that even as the markets rise trying to maintain some sense of real value, stocks still fall short. 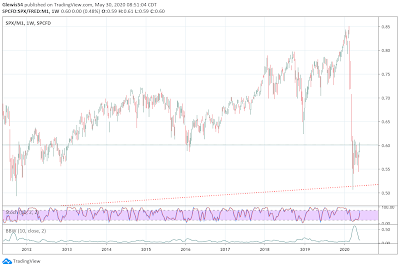 In light of this view, it appears that being invested in stocks is better than not.

Back to the market interpretation.  I had early on suggested that a correction can often be in a zig-zag shape. 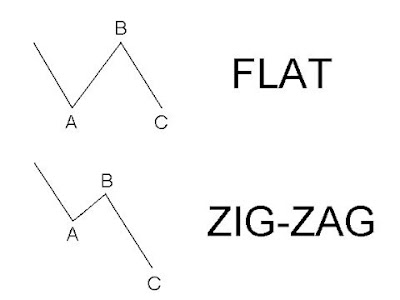 We can see two types of corrections here, a flat and a zig –zag.  A flat correction could even reach the start of the down move, which was the market highs.


I suggested this possibility https://www.tradingview.com/chart/SPX/zNBwBPzn-SPX-A-test-of-the-highs-as-a-possibility/

on April 17th.   One viewer’s comment on this was:

It’s usually when I get abused by outlandish calls, although within the realm of possibilities, I believe that I am on to something.


One thing for sure, get out of the way when the Fed and other central banks are lavishly dumping money into the financial sector.  You can be sure that it is not going into your pocket, but Mr. Market’s.


Focusing on the Dollar 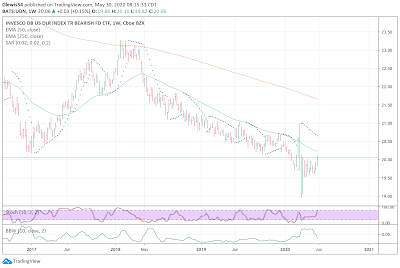 One has to think as the Federal Reserve increases the money supply, the value of the dollar needs to decrease.  This is simple logic as the value of the dollar is supported solely by the government’s tax base and it’s ability to pay interest on its debt.  With interest rates down so low, perhaps the “strong” dollar can continue to be supported.  This instrument above UDN is a way to play or view the dollar going down.  We can see that UDN increased 1.6% this week but remains down 2.2% on the year, reflecting the US Dollar’s strength against other foreign currencies.  It appears to be reaching resisting just overhead at the green line (50 week Exponential Moving Average). 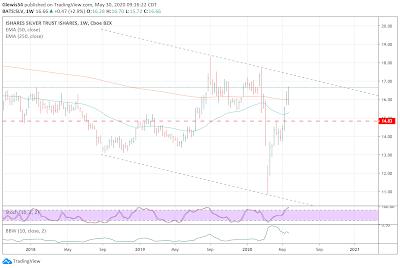 I continue to like Silver at the moment although it is reaching it’s high level.  In this view, we can see a clearly formed down trend.  Just as stocks have shown an A-B-C correction format, silver also appears to be in a B wave correction mode and can possibly fall back to lower lows.

Another view of silver that I had contemplated recently is this: 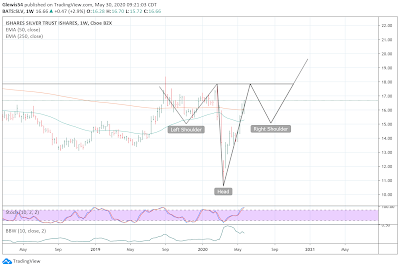 Both scenarios are on the radar and I will be watchful of.


Especially with Precious Metals, it appears to be prudent to buy physicals such as gold and silver bullion or American Eagle coins and keep them secure in your elements, not at a bank safe deposit vault.  The real value of holding these are in some event affecting the banking system, if you are unable to access cash machines, sudden collapse of the dollar (with ever increasing tensions with China, Russia, Iran, Saudi Arabia, ...), or some other event that is only foreseen in prophesy, stuff can happen and as we have seen recently with the restrictions of our freedoms, holding a physical that might hold value and be used in exchange for goods and services is important.  While a word of caution needs to be injected here, it had been illegal to hold gold three times in our history:  1919, 1933 and as recently as 1973.  As there is to any risk of our properties in this day and age, our precious metals, held within our borders, governments can and have confiscated our property.  But it’s your best bet for being diversified.

And buying physical gold and silver is much like buying real estate.  The spreads between the buy and sell price are much wider than in the paper trading markets so any impulse to trade it in small quantities does not make sense.  The big banks hold massive quantities of precious metals but sell options, futures and other instruments in the paper market to leverage their holdings.  I tend to do the same thing.  I hold physicals and long term SLV options.  I often sell options against my ETFs to generate regular income.

We can see that the smaller companies, as reflected in the Mid-Cap. Russell 2000 and micro cap segments, the worst the annual performance.  I would expect that the IWM would begin to start off the market decline so will look to enter into a down position for this instrument. 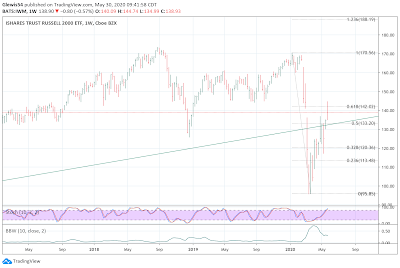 In the weekly chart of IWM, we can see that it was repulsed at the .618 Fibonacci retracement level.  Many expected this to happen with SPX (large cap stocks) but this has not happened.  The Russell 2000 is the weakest of the SP 500, QQQ (tech sector that is challenging its highs) and mid cap.

For grins, here is QQQ for comparison: 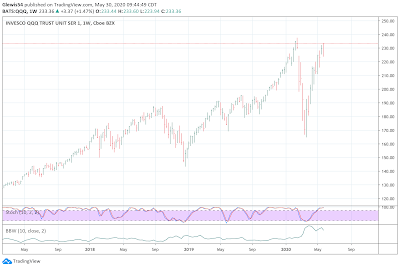 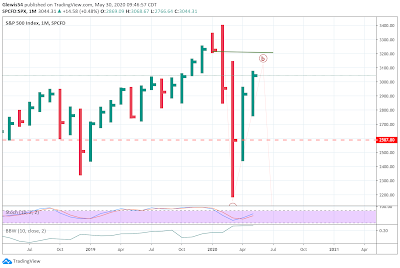 I often like to look for tests of highs and lows.  Regular periods of these tests are three, sometimes four periods.  On a monthly view, we see that we are at four months up, trying to take out the highs.  On QQQ we tried hard over the past few days to rally above but failed.  SPX above is still well below the highs.  We might expect things to turn and now go down for a three month test of the lows, possibly four.  With this next potential move down, we can see what kind of correction plays out.  Is it a Flat? Or a Zig Zag?  In SPX, it would form a zig zag implying even lower prices on the way down.

If we ever start moving down, I will comment more.  Unfortunately, any move down has been met with fierce Federal Reserve stimulus and Government interventions.  They cannot allow the markets to go down nor can they allow corporations to default on debt.  The consequences would make you very glad that you have physical gold and silver on hand.

Thanks for your attention.