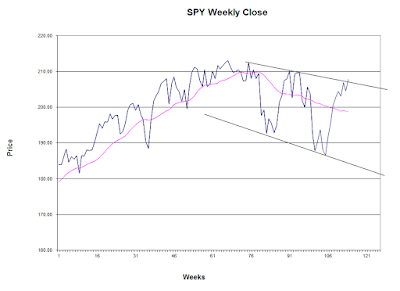 The market moved ever higher this week, breaking through, what was expected to be, the final line of resistance.

Volume continues to decline and my technical indicators also show that technical momentum is not there to support higher prices.

Assuming that nothing goes up forever, I'll continue holding my SDS position (two time inverse S&P 500).  Fortunately, my accounts are being saved by long positions in gold, silver and gold stocks.  The rise in these assets seem to verify the continuation of easy money in the markets and the increased potential for a much lower dollar and inflation.

In the end, you can't fight the Fed.  And just this past week, Fed Chairman Yellen met with President Obama and Vice President Biden.  What they discussed was not revealed.  Other Central Bankers were on the move, meeting in high level meetings.  Lots of news that has not been accentuated:  Puerto Rico debt, Austria Bank debt, big banks failing to provide workable living wills.

Lots of potentially disturbing news out there but the market rally has gone on far too long, despite lots of negative news in between.  In the end, if the Fed wants the markets to go up, they will go up, no matter what.  It's my guess that the markets will maintain at least until November.

Seeing how I already shot my bullets claiming a top, and now have been proven wrong, I will work on other more rewarding activities.  I expect this will be my last post for the year unless something interesting develops.