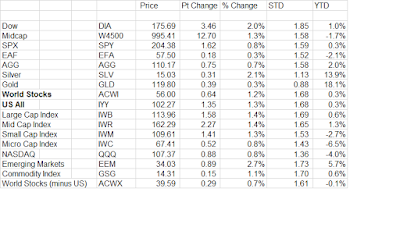 Stocks continued to advance for the fifth straight week.  The Dow Industrials led the way moving ahead 2% on the week.  SPY, the ETF that replicates the Standard and Poor's 500, appears to have lagged but when adding back the $0.80 price reduction for ex-dividend day on Friday, it managed to advance 1.2% overall last week.

In my last post, I suggested that we might be seeing a top as 1) the 202-204 price gap on SPY was being filled and 2) some price derivative indicators where giving signs that a reversal might occur.  Yet the market continued onward.  From closing lows, marked on February 11, the Dow has advanced 12% and the SP has advanced 11.76%.  Gold and silver have done nothing in that same period and 10-year and 20-year government notes/bonds, as reflected in IEF and TLT, have posted negative returns.  For the year, Gold and Silver have led the charge while stocks continue to post negative year-to-date returns. 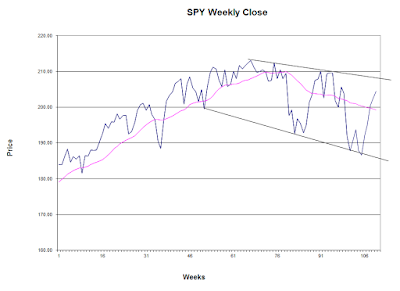 Price on the SPY appears to be dead set in reaching the upper channel line as illustrated above.  The move however defies my momentum indicators which show the price should begin reversing. 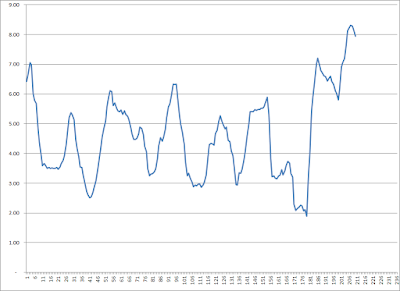 The chart above is the weekly measurement of the Size of a 20-da standard deviation.  As price rises, one needs to stay with the trend as price is rising faster than the moving average.  When Size reverses, the generally indicates that it's time to exit the move.  I can't recall ever seeing a Size chart that looks like this though.  Size generally is cyclical and doesn't show waves higher or lower as we see in recent weeks.

For those who follow waves, the recent series of A-B-C down and now an A-B-C up, might be of some significance.  In the end, it just goes to show that nothing works forever.  But keep in mind, I developed this method back in 1988 and it seemed to have worked well for almost 30 years.  So the dynamics of the markets are changing.  It is no longer a secret that Central Banks are now active in the world equity markets.  High Frequency Trading, Spoofing, low volume and other elements really make it hard to be in the market any longer.  Rather unfortunate.

Another chart that needs to be seen is the weekly standard deviation chart. 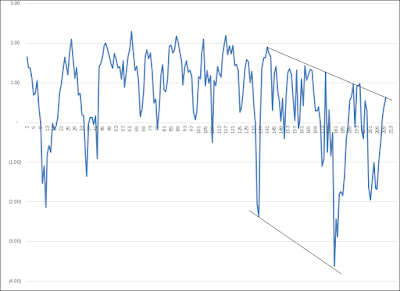 This chart has been respecting the upper trend line but now we are right at the top.  Will it break out?  Not sure, without further analysis of that specific indicator.

I could say that it is more evidence that we are topping, but in this new world of continued low rates in the US and negative rates elsewhere, the free money must continue to find a home and the US is the best place, or so it seems.

Still, as mentioned in my last post, I added some SDS (double SP short) to my account and will stand pat as we test the 207 channel.  Not sure what I will do then.  Quite frankly, I grow bored with these one-way markets.  Five weeks now more or less just in one direction, zzzzzz.