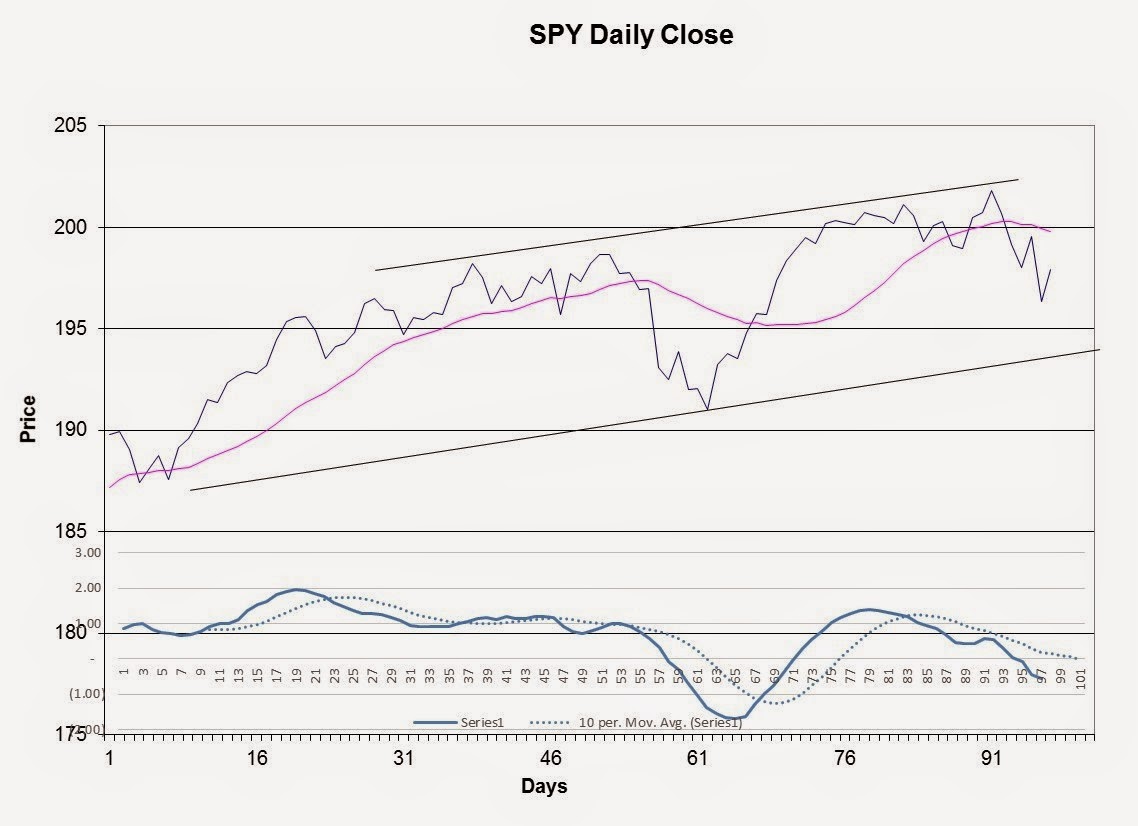 Price levels twice moved to steep oversold conditions this week, dropping to a -2.5 standard deviation level on Tuesday, with price dropping 1.14 to 198.01.  Prices rebounded on Wednesday, as would be expected for a severe oversold level but failed to achieve the 20 day moving average.  Prices then dropped even harder on Thursday, falling 3.22 to 196.34.  This brought the standard deviation level to a minus 2.96!

Here is the long-running standard deviation chart for the 20 day moving average.  It certainly does appear to be marking a cycle low but the zig-zag pattern is one that had not appeared before on the chart.  Normally, this type of a formation is an extension, indicating lower prices and future oversold conditions.  The price chart shows the 20 day average rolling over and a lower channel line coming in at the 194 level. 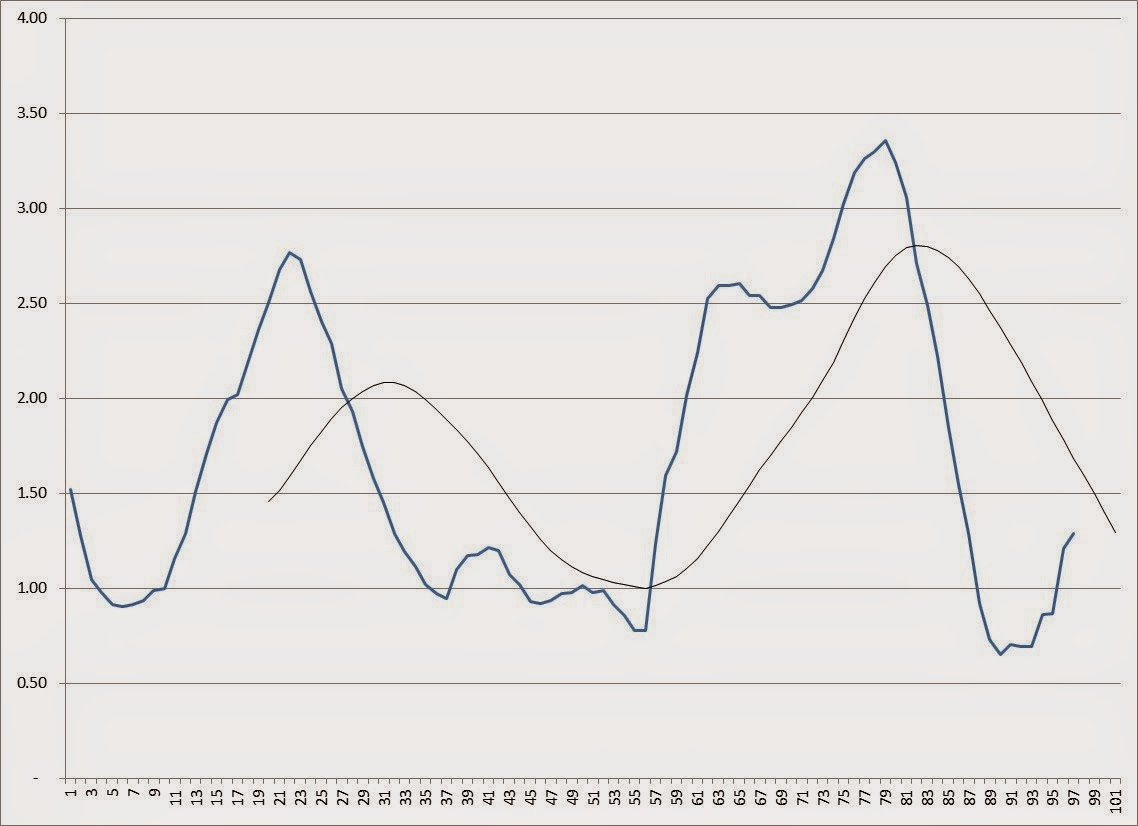 Standard deviation Size, on the 20 day data, is increasing and is close to hitting a falling average line.  This increasing Size suggests that the down trend will continue.  The very low level of Size (or volatility) shows why SPY has easily moved to overbought and oversold levels in recent days.  It's nice to see this indicator increasing as low volatility markets offer little opportunity for profits other than selling option premium.

The weekly chart looks quite different. 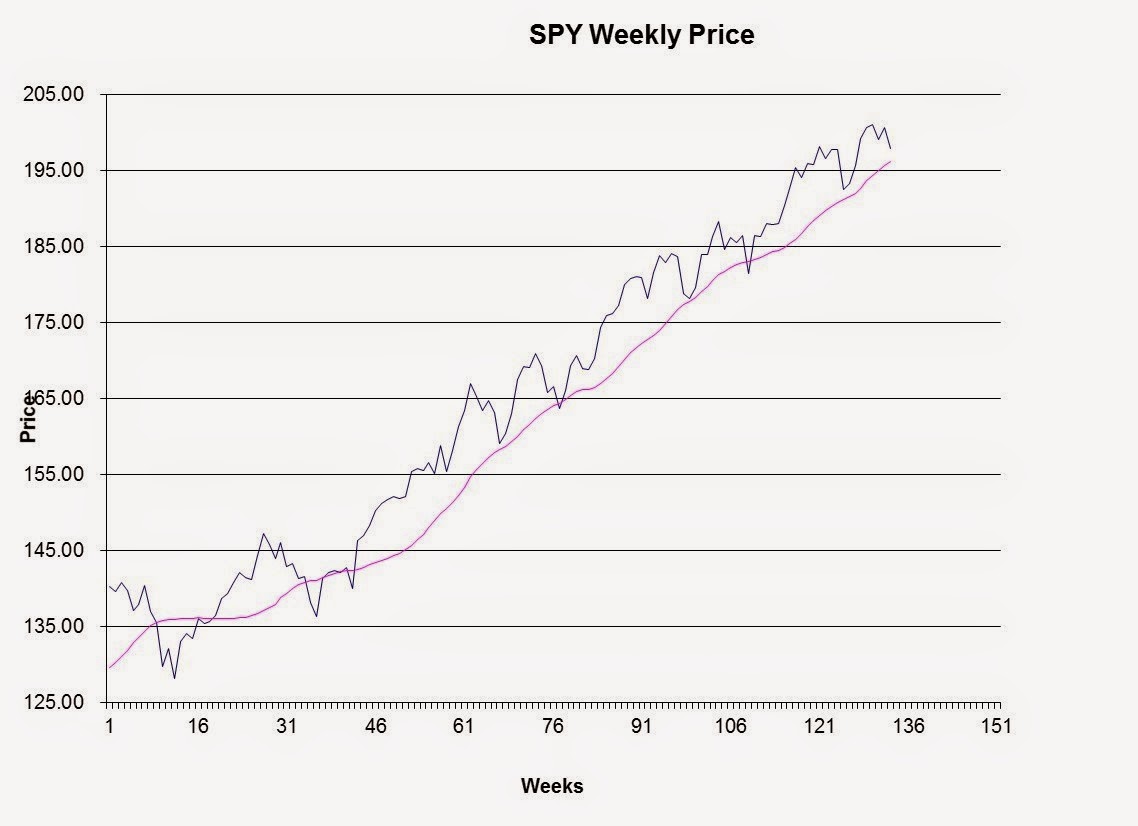 The trend is your friend is the dominant thought when looking at the weekly chart.  Despite seemingly dramatic moves on the daily data, the weekly chart looks rather ho-hum, with prices drifting to the trend line with the potential to once again bounce to higher levels. 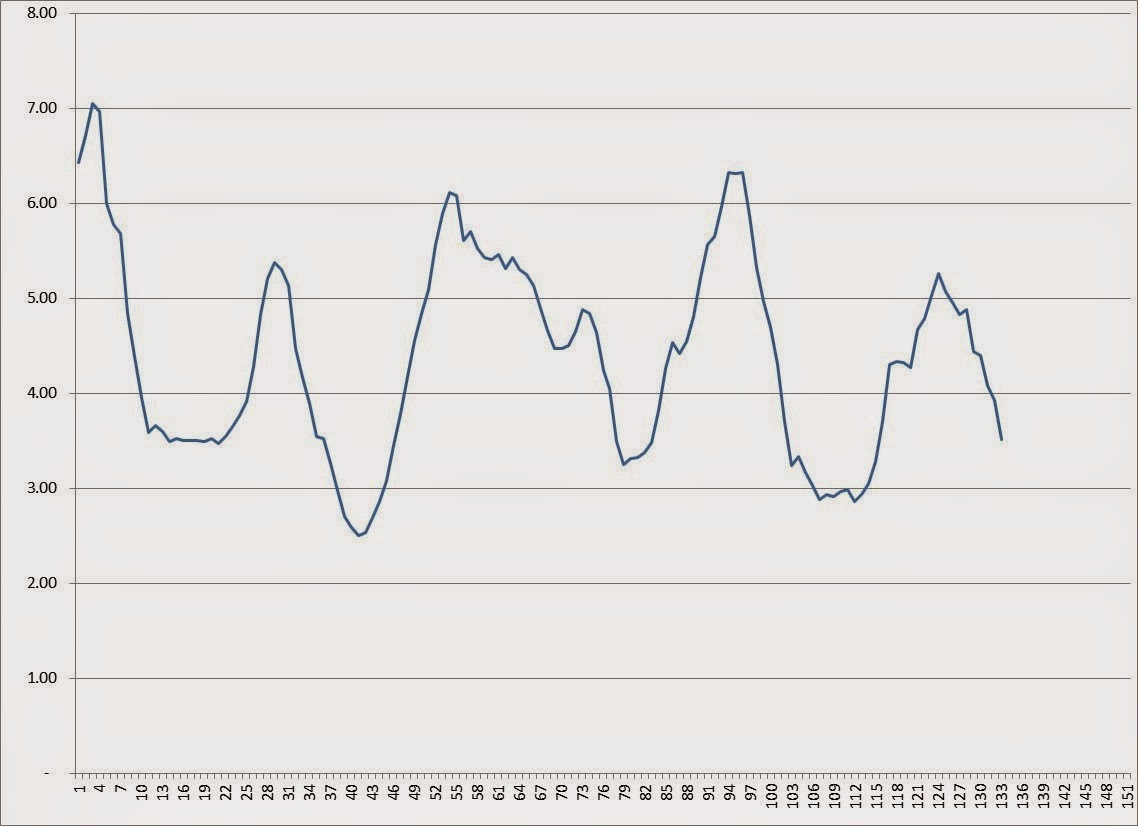 Weekly Size confirms this prognosis.  Generally, declining Size dictates selling premium at the extremes since visually, you would see the narrowing of the Bollinger Bands and a tendency for price to drift to the mean. 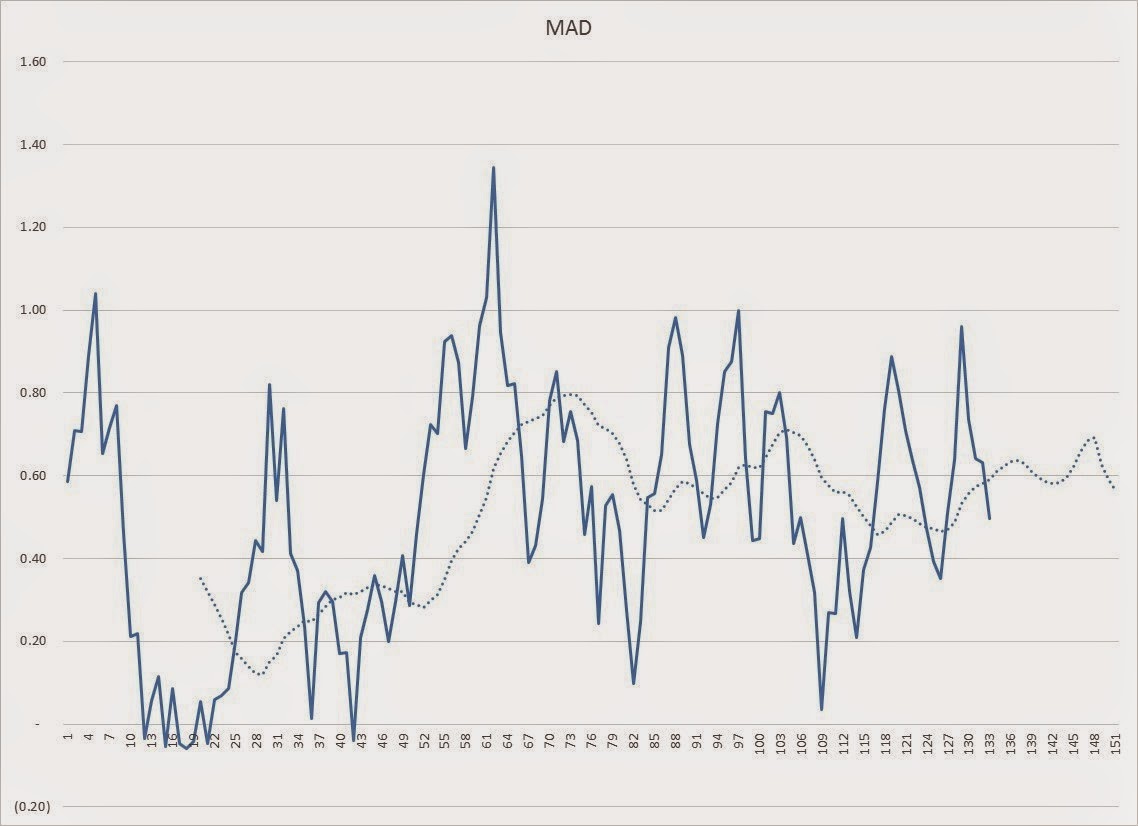 This chart illustrates the weekly change in the 20 week moving average.  While this indicator has fallen below its moving average, the trend remains positive, moving up on average of 0.59 each week from its current 196.14 level.

Usually, I like to buy at or below a rising trendline because, in my mind, you have low risk.  Even if you are wrong and price moves against you, almost always, prices regress to the mean and that means you will have an opportunity to exit, if the trend begins rolling over, at prices pretty close to your entry point.  I use this process especially for long term investments using the 40 month moving average.  I consider this average a good assessment of fair value.

Where might we go from here?  It appears that downside will be supported by the channel line on the daily chart at around the 194 level and the 20 week moving average will be around 196.60 next week.  I generally look for three day tests of highs and lows so my best guess is that SPY will remain flat to higher on Monday, possibly reaching as high as 199.76, the 20 day moving average.  A failure to take out that resistance level may see prices move dramatically down to the 194 level.  Even a move down to that level though would not be enough to reverse the decline in Weekly Size.  If price can't take out that support line, I'll be taking Bull positions in SPY for the long term, playing the rising trend line.

On the weekly data, SPY will have to fall to 188 or lower to see momentum picking up on the downside.  Should that happen, I would be standing firm with my current positions which consist of in-the-money, October, November and January SPY puts and out-of -the-money SPY October calls with about a 75% put to 25% call ratio.