Where Will the Fed's Dollar Debasing Policy Take Us?

While Treasury Secretary, Timothy Geitner, and Federal Reserve Chairman, Ben Bernanke, feel that the addition of $600 billion more to the money supply will help the US recover from a severe recession, the rest of the world does not agree.  Already, we can see that the dollar is at decades low levels against many of the world's currencies. 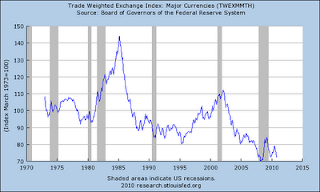 Over the past 10 years, the dollar has fallen from around 110 to the mid 70s.  With additional Quantitative Easing, or the addition of even more dollars into circulation over time, many expect the dollar to continue moving much lower.

Although interest rates are only now starting to nudge up, reaching about 2.75% on a 10-year Treasury Note,  the government's intent behind the additional Quantitative Easing is to make money even more cheap for the banks and investment institutions.

It's clear to see that interest rates have been extremely low over the past 10 years.  We are currently at levels reached nearly two years ago when the world economy was in crisis.  Yet, our government and Federal Reserve believe that interest rates need to be lower still.  Unfortunately, their actions may have serious consequences.  Already we see the price of oil again skyrocketing boosting gasoline prices.  Food also is moving higher in price.  And as the government tries to pressure China to boost the value of the Yuan, China's currency, if successful, prices of cheap goods, which American has come to depend on, will start to rise.  This will surely take its toll on the already pressured US consumer.

In a recent article by John Browne  A Bad Plan Poorly Disguised , Mr. Browne suggests that the US may be purposely devaluing the dollar to cheapen it's debt.  Although we do not have "official" inflation, the declining value of the US Dollar surely means inflation for average people who consume food and drive cars.

Eventually, China and other countries that are supporting the US's trillion plus annual budgets, will eventually say enough is enough . China has been warning us for well over a year now.  Yet the US appears to only show arrogance in the face of our new landlords.  The US may believe that China has no recourse but to continue buying US debt lest the value of these securities fall dramatically.  But it may just appear that we have China over a barrel here.  The US economy tetters on the brink of disaster.  A sudden sharp rise in interest rates will truly destroy our fragile economy.  How would the US support its already massive debt payments if interest rates would double?

The day of reckoning will come.  The Fed has been trying to manipulate the economy now for years and each period of effort has resulted in still another bubble.  First it was high tech, then real estate, and now bonds.  They say there is no bubble.  But they said that about real estate too!

Are you prepared for the day when the stuff hits the fan?  If you took big losses after each of the previous bubbles bursted, then you are probably not prepared.  Rising markets cause complacency.  But as discussed a month or so ago, I see the Dow back down below 5,000 perhaps as soon as 2012.  The Fed cannot continue their reckeless experiments.  Yet they cannot stop.  It reminds me of the Barings Bank or Orange County bankruptcies.  Once they set forth on this dangerous past, they have to keep doubling up on their bet to try to get back to even.  In the end, there is only one result.  Bankruptcy.

Few are telling you how to prepare for the debacle that I believe will come.  Contact me if you'd like more information
Labels: Asset Design Center, bond market bubble, federal deficit, Federal Reserve, Gary Lewis, stock market crash