Everything seemed to be in place for rising rates. All we needed was the piece of news to get the ball rolling. The news arrived in the form of a better than expected unemployment number. Despite warnings that the snow storms of late probably caused unemployment to rise more than normal (imagine getting laid off because you couldn't get to work because of a snowstorm!), the unemployment rate steadied at 9.7% and the job losses were minimal.

Ten-year rates rose immediately, jumping from a base of 3.60% to 3.69% at this moment. While we can never totally predict what is to happen, we were confident that rates were headed higher. Just take a look at the daily cycle indicator above. After making a fine base, it is moving up! 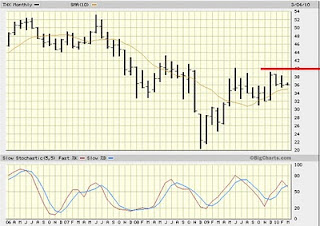 Look at the monthly chart. Sure, the stochastic indicator below appears to be breaking down, but this is from a base of the 3.60% rate that was in place when this chart was generated. More importantly, if we go with the basic chart pattern of a three period test, we can see that the interest rate should rise to test the previous high of above 3.8% set three months ago. Should rates stall here, we would want to change our outlook for higher rates. For now though, we believe that the economy is beginning to rebound. We see it in our analysis of Micro and Small Cap stocks, that are rapidly rising. We believe that this is a sure sign of a recovering market. 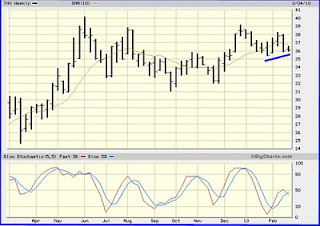 Look at the weekly chart of 10-year rates. Last Friday, we held the low of three weeks prior. This generally indicates good support. The three-week test of the low is generally a solid buy point for me. To confirm, we need to see some upside, preferrably breaking through the recent highs of 3.8% 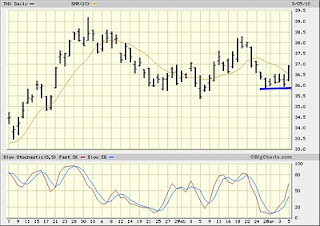 Finally, if we look at the daily chart, we see that yesterday's action tested the lows, albeit on a four-day basis instead of three. This however could have been expected as the trading world seemed to have come to a standstill in anticipation of today's unemployment numbers.

It's like the perfect storm for a rate rise. We can see solid indicators from every time frame showing that now is the time for a move higher and possibly a breakout of the 4% level on the 10-year rates.