As reported earlier this week, the S&P Index broke through the Wilder's Parabolic Stop and Reverse technical indicator, informing all that it was time to sell. This time, the indicator worked like a charm as the markets continued to tumble on Thursday and Friday. The obvious catalyst was China's decision to slow lending to curb what they felt was an overheated Chinese economy. Then President Obama, stunned by losing a Senate seat in Massachusetts, retaliated against the banks yesterday, again stimulating market selling. Today, Obama's desperation seemed to spook the market with many saying, "he has no clue." For sure, it's Fannie Mae, Freddie Mac and AIG that is the big black hole in the bailout package. These are now government-controlled entities that are the biggest losers but went unscathed while big banks are facing new taxes and trading restrictions. Suddenly, the banks are being seen as being picked on by Obama. Ummm, unintended consequences for sure.

WORLD'S WORST FOR THE WEEK

European countries got hit the hardest for US investors. Market losses were further compounded by a strengthening in the US Dollar. The ETFs that are tracking these markets are priced in Dollars, and the Dollar gained 1.4% this week against foreign currencies. Gold, by contrast, was down just 3.3% this week. In this case, holding gold in your portfolio was a better choice than holding international stocks. Something you should consider.

Concern continued to weigh on the Euro as many analysts were talking about the PIGS (Portugal, Italy, Greece and Spain) getting slaughtered. ALthough we had been very bearish on the dollar last year, it did appear to hold a base and this year, I expect it to be strong in the face of rising interest rates and possible chaos in other parts of the world. In the end, if the dollar collapses, is there really any hope for the rest of the world? Despite all of our chaose at home in the politcal arena, US investments are still the investments of choice.

US WINNERS AND LOSERS 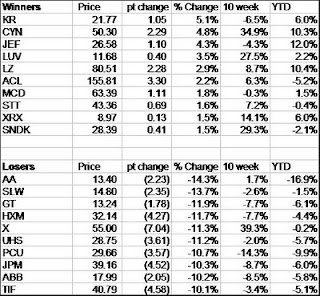 While losers far outpaced winners with 27 advancers and 180 losers in my database, some stocks managed to do quite well this week. Kroger was the star performer up over 5% but coming from oversold lows. We owned Kroger last year and it was one of our few disappointments. Perhaps this year, supermarkets will rise again!!

WHAT WE ARE DOING??

The market is still overbought in my book but I will be looking selectively for individual stock plays to enter into. But for now, I am convinced that interest rates will rise. We shorted the 10-year note future today. Follow my interest rate and currency trading at Current Interest Rate Trades.