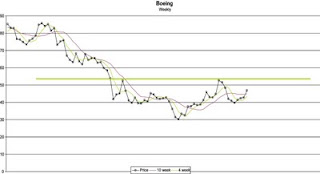 The buzz on the street now is Bank Stocks. AIG earnings come out strong, Kramer recommends CitiGroup on his CNBC Mad Money show, the world banking system is now safe!

While this may or may not be true, and I must admit that I took a position in Bank of America earlier this week, there are other sectors of the market that are also doing well with much less coverage. I've been following Boeing now for sometime and a week or two ago, discussed the opportunity that the September 45 call might allow. It traded at a buck only a few days ago as the stock backed down temporarily. The selling was short-lived however as the stock quickly rallied back to its recent highs and broke through reaching as high as 46.90 today on the good economic news.

In an earlier blog, I suggested that Boeing could be one of the stocks that could lead the Dow in the next leg up. In my last post, I reviewed how the Dow average looks and suggested that we are at a resistance point but momentum continues strong. As we look at the Dow chart and compare with the Boeing chart, we see that Boeing has lagged considerably. But that doesn't mean that it will continue that way. When markets are cycling higher, it will life all boats as the saying goes. For Boeing to be at the same level, chart-wise, that the Dow average is at, Boeing would need to be above 52, some 5 points higher than it is currently.