More Evidence of a Market Top 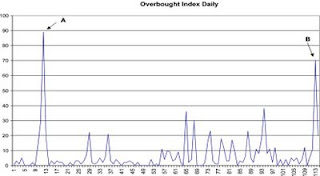 Before any major market decline, specialists drive prices higher, generating big demand, that they sell short into. We might have seen such action in the stock market yesterday when prices, across the board, surged. The evidence of the breadth of the move is illustrated in the chart above. If you have followed my writings, you will know that standard deviation is at the core of my analysis. When prices move to extremes, it is generally not because of a change in valuation, it is a change in sentiment. When prices move to the +2 level, people are acting irrationally and chasing stocks to price levels that are not "normal."

I haven't looked at my daily data until just now as I was wrapping up the details for my monthly analysis. Yesterday though, if you had read my blogs, you would have sensed the frustration I felt as the bull run reached a ridiculous level in my mind. I instinctively sold just about everything and sold an S&P call to boot!

This is the opposite reaction that others would have. Others were instinctively buying into the rally. They were obviously (????) doing the wrong thing? Only time will tell. 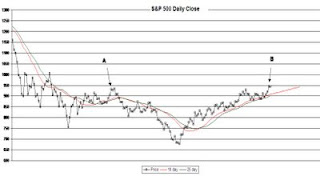 Notice Point A and Point B on both charts. Point A came on January 2, 2009 when the S&P rallied to 931.8. It went up two more days then collapsed! Look at Point B, yesterday's trade. Another huge spike in overbought stocks and another market high? For reference, my database used in this study is 208 stocks, each the leader in it's industry. There is only one representative from each industry. In the January reading, neary 50% of the industries were overbought. In yesterday's reading, almost 35% of the industries were overbought. Since I haven't seen such a spike in between, I've got to take it as a good hint that specialists were distributing across the board and that the market will soon fall.
Labels: Asset Design Center, Gary Lewis, stock market crash