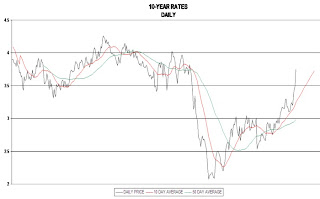 How can it be that after months and months of facing the facts, 10-year rates languished, struggling to get above 3%? Then suddenly, rates started running and haven't looked back. Everyone in the world wanted to short bonds but the fear of the Fed's intervention seemed to be the only thing holding them back. Last week though, Fed buying was tepid and rates started to run.

Today's run (including after-2pm trading) pushed 10 year yields to 3.75%, up more than a quarter percent from yesterday! The move was an extreme PLUS 3 move. 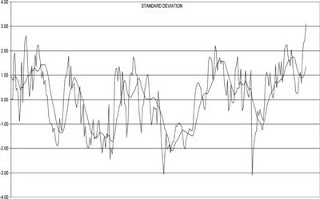 In the normal world, a +3 or -3 reading is very rare. It should happen maybe once in 100 events. But if we look at the standard deviation chart, we can see that notes twice hit -3 levels, most recently on March 18 when the Federal Reserve Chairman, Ben Bernanke, stated that the Fed would purchase $300 billion of long end treasury securities to keep rates down. On that day, rates fell a half percent! Prior to that, rates fell sharply on November 20th, when American capitalism, as we know it, began to crumble. Compare the note interest rate standard deviation with that of the Standard & Poors 500. One would expect the stock market to be more volatile. After all, isn't that how it's supposed to work? Greater risk, greater return in the stocks? Aren't bonds for widows and orphans? 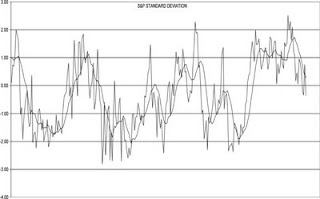 Time to Leave the Bond Market?

I'll be the first to admit, I haven't been watching the Chryler/GM situation as closely as I watch broad-based indices, but there is a true heaviness in my heart about how the Chrysler bond-holder situation was handled. I couldn't believe my eyes when President Obama faced the world and called bond-holders, who were holding out for their legal say in court, were bashed and criticized by the president. I mean it's not like these CEOs, Victor Pandit for one who earned $100 million last year, they don't have to take the pain. The highly paid bank CEOs who have cost taxpayers billions of dollars aren't asked to give up some of their gazillion dollar homes. Could it be that really, the bankers are calling the shots? More on that later.

How bond holders could be denied their rights as senior creditors totally destroys my apparent illusion of the markets. Watch what is going to happen. People will sue the fund managers for selling out and doing what Obama wanted. These fund managers had a fiduciary responsibility to their clients to fight for their rights. The fund managers gave in and deserve to be sued. But just as when Bush ordered telecommunication companies to illegally tap US citizens, when the public tried to sue, they were not allowed to. Wrong-doers get immunity. It's not fair. It's not right.

And now they are messing with one of the greatest parts of America, it's free enterprise system. Where winners are allowed to win and losers lose, not get bailed out. Bonds, bonds, bonds. Everyone thinks they are so boring. But they are a bad bet. Exceptionally high volatility, attempts at manipulation and no legal rights make the risks of taking positions in the bonds too ridiculous for me.

Forgive my rant, I object to the volatility and market manipulation that might have led to it but I'm happy to say that I was positioned correctly for the move. And furthermore, I anticipated that the move would gain more and more momentum. If you have been following my blogs, you too have been capitalizing on the rate rise. If you read my blog yesterday, you would also know that we started selling stocks as the market rose to our anticipated level for the week. We further positioned ourselves for a down move this morning, while preserving much of our better than 10% gain year to date. Our cash position is now above 50%.