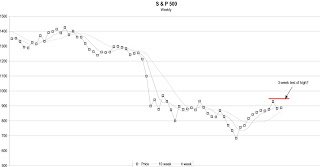 While many will think that the stock market endured a rather dull week, in truth, it was a very important week. As I have been reporting since last week when the market finally broke it's winning streak, it's time to start watching for a topping formation. One of my favorite topping formations is the three-period test of the high. As stock markets settled in to close virtually unchanged this week, we can see that we continue along a perfect setup for the test of the high. Should the S&P not close above the 929.23 level next week, or 8,575 on the Dow, the market will provide what I believe is one of the most reliable reversal signals. 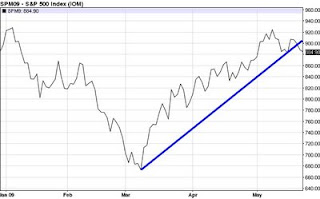 Many have been saying that if the S&P falls beneath the 889 mark, the market will fall, perhaps to new lows. While I am, nor have I been, bullish throughout this entire move, I think that it's premature to predict a return to the markets' March lows just yet. One must not lose sight of the fact that the Fed is continuing to flood the market with dollars. These dollars have to find a home. If you are holding dollars, then you are certainly going to lose. Yesterday, I heard on the stock market tv channel that even Warren Buffet does not have any cash. Rather than interpretting this as a bullish sign, I thought that it just makes sense. Whoever says that cash is king is not looking at the continual devaluation of the dollar that is taking place.

When the Treasury Secretary claims that the US has a strong dollar policy, the following chart illustrates that either the secretary is telling a big fib or that he just sucks at his job. 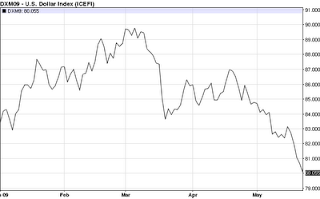 At the risk of being called a "wacko," I believe that the Secretary, being the former head of the most-important New York Federal Reserve bank, is using his government position to enhance the wealth of the Federal Reserve, to which he will most likely return once he finishes looting the taxpayers.

There has been lots of talk about how big of a lender China is to us but are we really beholden to the bankers? With the Federal Reserve buying another $300 billion of Treasuries, I would guess that in the end, the bankers who own the Federal Reserve will probably be our biggest creditor. The Federal Reserve's and Treasury's actions are only to serve in creating still another asset bubble. The trick is to identify the bubble, get as much profit as you can, hedge your newfound wealth and be sure not to be the last fool in the game! 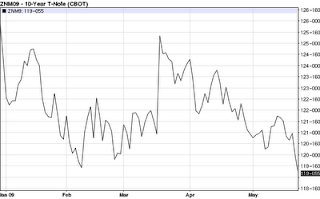 Above is the daily closing price of the June 10-year Treasury note future as traded on the CBOT. Note prices have been in a major decline since the Fed's announcement in March that they would be buying $300 billion of long-end Treasury Securities. Price declines picked up momentum on Thursday when the Fed's purchases of long-end treasuries fell short of what the market was hoping for. Many are now predicting that the Fed will step in to moderate the decline. But is this really in their best interest? The Fed merely represents the banking cartel. Higher interest rates result in a higher debt payment that the US and everyone else will have to make. Banks like to get higher interest payments. Unfortunately, I'm too old to believe any of the babble that comes out of the mouths of bankers or politicians. They say one thing but act in a totally different manner.

Size is Still the Key 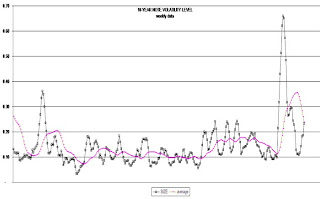 Those who have been reading my materials know that Size is the Key. When Size is increasing, you cannot, MUST NOT go against the trend. The chart above shows the weekly size of the 10 year rate. It has just gotten to "average" but because it is rising, you must not begin to think that the decline in bond prices is over. It is just starting! Don't expect the Fed to step in to moderate prices. If they are truly acting as a fiduciary for the bank owners, they will buy Treasuries at the best prices, when yields are significantly higher than they are now. You've got to remember that the Fed is not a government organization. It is a private banking organization. We have already seen that there is no limit to the amount of greed in the banking system. Even former-Federal Reserve Chairman, Alan Greenspan, lamented that he couldn't believe that the banks would not act in the shareholders' best interests!. Of course he was right. Banks did act in their best interests. Who the real owners are though, that is the question. Just look at the billions of free money the banks have been getting. Just look at all of the future gains they will receive. Certainly, the banks, at least the favored banks that are on the "too big to fail" list will win big. It is our job to make sure that we also buy into these banks, but at the right price!

Other Effects of Falling Dollar 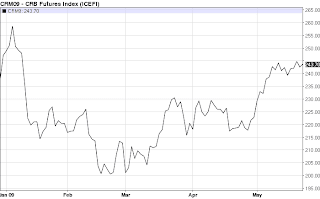 The above chart is the daily action of the CRB Index. At one time, this chart used to be closely watched as a sign of inflation. Be careful. The Federal Reserve and Treasury tells us that there is no inflation. Our biggest concern is DEFLATION! But again, don't listen to the talk unless you like talking about it at cocktail parties. Last year when the oil prices skyrocketed, we didn't have inflation, we had "pricing pressures." Call it what you want. Prices are going up, we have to pay more. In the end, I hate what the Fed and our government is doing to our purchasing power. Even China now is trying to break it's habit of taking dollars. It is going to be a hard habit to break, but the sooner we can move to making transactions in gold or some other medium, the better off we will be. Unfortunately, the dollar continues to retain value because there is really no other fiat currency that is any better. In the end, fiat currency is only worth the value of the paper it is printed on. 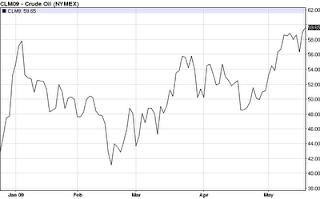 I like oil. Each day I hear that there is no reason for oil to be so highly priced. There is no demand. I remember last year that supply/demand had no relevance in the huge runup in oil prices either. It was the dreaded "speculators" who caused prices to run up. If my money needs to be someplace, I think that oil is a great place. Like gold, it is traded in dollars so it will help preserve value. Unlike gold, it is consumed, every day, in greater and greater quantities as less developed countries develop.

As some people say that they have been buying gold continually to preserve their wealth, I have been doing the same with oil I have been using the Exchange Traded Fund OIL.

Oil has a long way to go on the upside. It doesn't matter whether the cause is increased demand or dollar devaluation. I like oil the best. While I do have a position in gold, I remember the day when it was illegal to own gold. Do you? Yes, it's true. Not too long ago, it was illegal to own gold. If the government was able to do it back then? Why can't they do it again? What if the dollar totally collapses and the government decides that it must go back to the gold standard. Do you think that they will let you hold on to your gold?

I hope I'm wrong but I think that it's prudent to think through every possible idea. Remember what they say, those who don't remember the past live to repeat it.

Have a great holiday and be sure to subscribe to the Trendsetter newsletter.