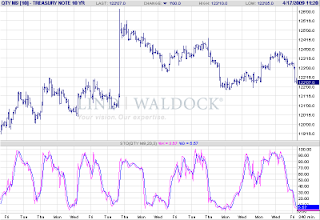 Prices on the June 10-year Treasury Note contract fell today as economic data was not as bad as expected. Also exacerbating the situation was a lack of buying on the part of the Federal Reserve. Notice the big spike up several weeks ago when the Federal Reserve announced that they would buy $300 billion of long term treasury securities. With the exception of the recent pop in prices that we predicted in earlier blogs note prices have since been retreating and are almost back to the Pre-Fed announcement levels.

Currently, the 10-year rate is at 2.94 at 12:45 central time. It is breaking out of the pennant formation and could advance on to the top of the price channel. By selling some out of the money puts, I'm am betting that the rate will back down into the pennant by the end of the day. Still volatility levels are low and even with all of the supply concerns and good earnings reports that are coming out; it's important to keep in mind that bank earnings might the products of manipulation and are not as good as they are now appearing. While rising interest rates (and falling note prices) indicate that the economy is gaining strength, I'm not quite yet buying it.

Bond prices might rise early next week one more time before falling. I wonder though how high the Fed will allow rates to rise before stepping in to drive rates down. While I expect rates to rise much higher in the long term, the threat of Fed intervention is always present. While this is disappointing for trend followers, it should present good trading opportunities. As such, with stochastics at the low end, I am taking the chance that prices will rise from current levels, providing a profit opportunity for the new short put position. I will also have the opportunity to establish a short June call position since the May options expire next Friday.
Labels: Asset Design Center, bonds, Gary Lewis, investments, notes, Stock Market, treasury securities