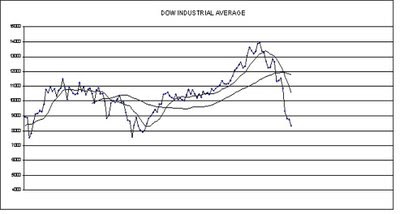 The Dow Industrial Average continued falling through January as it strives to find support at the 7,500 level. The average fell as low as 7909 on January 23 before rallying up to the 8,400 level. The rally continued on Wednesday even as the Federal Reserve Board, noting further economic weakness, vowed to hold its Fed Funds Rate at 0%. Falling stock prices and low interest rates indicate but one thing. Rough times do not appear to be over yet. The Federal Reserve, in a recent statement, said that they were hopeful that the economy could start growing by the end of 2009, but the downside risk that this won't occur is great. 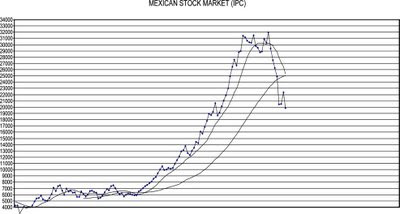 The Mexican stock market (IPC) also fell in January and does not appear to have found a bottom yet either. Volatility levels for both indices are increasing indicating that lower prices can still be expected. Mexico's central bank also lowered their key overnight rate to 7.75% and rates appear to be headed lower. Bank of Mexico governor Guillermo Ortiz predicted that Mexico could achieve a 0% growth in 2009 but that this was highly optimistic. This can only be realized if the US economy recovers in the second half of 2009. The reduction in the Mexican interest rate showed how serious the crisis is. Mexico, a country that has experienced double digit inflation in previous years, had hoped to keep interest rates high in an effort to contain an inflation rate that was measured at 6.5% in 2008. It has been hoping to reduce inflation to half of this level. With the world economy experiencing its deepest contraction since the 1940s, som predict that Mexico's interest rate will fall to perhaps 6% by mid year. If this is the case, the the purchase of Mexico bonds could provide capital gain opportunities.