After dramatically selling off several weeks ago, the equity markets have come storming back with a vengeance.  Nearly non-stop, the S&P 500 index has rallied some 90 points without barely taking a breath.  But now that we are at new highs, where are we in the cycle?  Some had expected a test of the low at the 1900 SP level.  This never happened.

I have been watching Elliott Wave technicians during this move and have found that there isn't too much agreement.  One chartist that I like is Daneric's Elliott Waves  http://danericselliottwaves.blogspot.com/.  In his post today, he shows that he expects that we are at a top for this current move up. 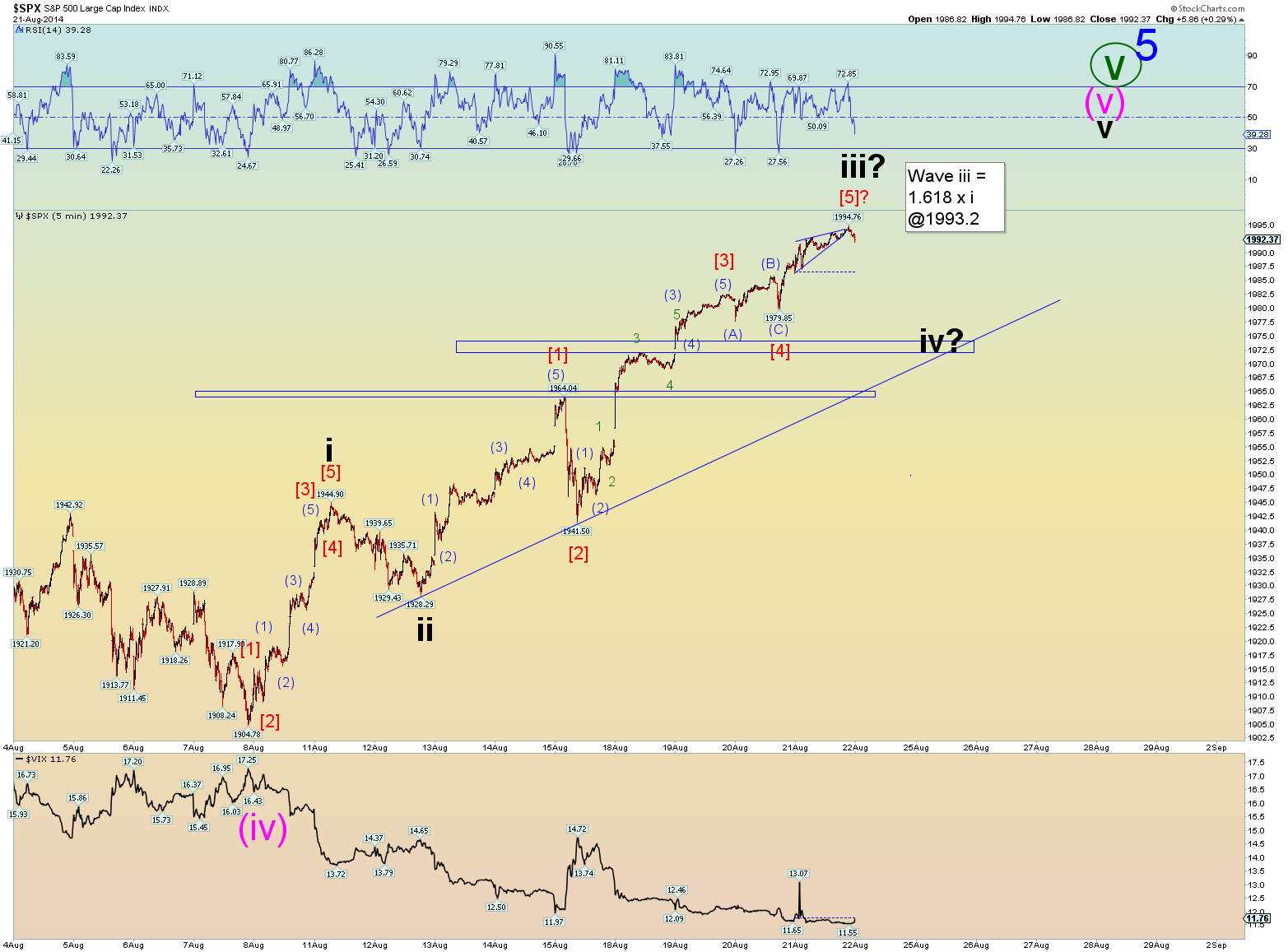 After a move down to iv on the chart, the SP will make one final move up to 5, marking the end of the cycle move.

Others feel that after hitting the little v mark, the market will fall back but not as far as Daneric is calling for.  They feel that there will be one more leg up taking the SP close to 2100 and then the big move down.

What most seem to agree on is that we are midway through or completing a wave iii and that there are at least two more moves coming, one down move to iv and a move up to new highs v.

Should the SP sell off tomorrow and close below 1978, some 14 points lower than today's close, that would be my sell signal.

It's hard to say what the market will do though.  Once upon a time, there was a limit to money and credit to drive markets higher.  Now there is no limit.  On top of all the cash that the Central Banks are manufacturing, $100s of trillions of derivatives also drive the market.  That makes it hard to understand how the wave theory could really affect market movements, that is, unless everyone is watching it and making decisions based on the wave patterns they are seeing.  But the truth is, there doesn't seem to be a lot of agreement at this point of where we are in the cycle.

As for my positions, I took profits on SPY calls yesterday and missed some of yesterday's and today's move.  I have been buying put spreads since the 195 level on SPY and have been adding more each two SPY points up.  Should we rally above 200 on SPY, I will be adding still more.  That being said, I am a fan of Daneric's count, looking for a sell off to capitalize on my puts and reenter October calls.

At the end of that rally, I hope to position myself well with longer term puts in anticipation for a larger move down.