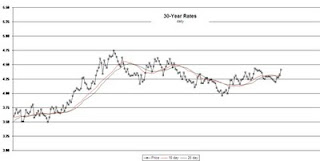 Stronger than expected employment numbers pushed interest rates higher this morning with the 30-year rate exceeding 4.25% and the 10-year rate pushing to 3.50%. The 30-year rate's next target appears to be 4.43%, recorded exactly one month ago on November 4th. A move above this level could result in a real interest rate surge.

One only needs to look at the stunning surge in gold prices to see the potential for a dramatic interest rate move. Gold surged over 20% in less than 2 months, bouncing off the $1,000 level to over $1,200. Although the US Dollar was continually weakening, the strength of the gold move overwhelmed that of the dollar. The gold move grew legs of its own as higher prices always brings in more buyers. With so much money out there and the market very well set on continuing lower interest rates - remember, the FEDERAL RESERVE said that they will keep interest rates low for the foreseeable future - a great many of market participants are positioned according to Fed-Speak. But sometimes, the market is just TOO BIG. Bigger than Ben Bernanke. What happens if rates shoot up 20%? What will the reaction be then?

Will the charge turn to higher rates? What will happen to all the countries and institutions that are heavily invested in intermediate and long-term US bonds? Is this why the government pushed the Accounting Standards Board (FASB) to discontinue mark-to-market accounting for banks? Banks and other institutions heavily invested in longer-dated treasuries would be devastated and another banking crisis would again arise!

And then what if China, Saudi Arabia, India and other countries start seeing huge losses on their bond holdings? Will they be sellers or buyers? How much more debt would the government need to bring to market to pay the higher interest rates? ARRGGHHH, how easily things could spin out of control. As you can see, the Federal Reserve and US Government will do everything that they possibly can to keep interest rates low. A surge in interest rates could potentially break the US. It is what many economists fear the most.

The question even came up yesterday in Federal Reserve Chairman Bernanke's reappointment hearings. He was asked about Dr. Roubini's (Dr. Doom)previously correct forecast that the US would having the housing crisis and his current prediction that Federal Reserve actions will result in just what I have been discussing here. Bernanke somewhat dismissed Roubini's forecast as being based on a poor economy while Bernanke was confident that his actions during the recent market meltdown, saved the economy and we are now on the uptick.

It was interesting to note that one Senator reviewed many of Bernanke's previous assurances about the housing crisis and other economic calamities. All the way to the end, Bernanke assured congress that there is no danger of a market collapse. Also interesting was that many of the senators complained of how the Fed and Treasury appears to be in a culture of rewarding failure instead of punishing it. In the case of Bernanke, it was clearly evident that he had failed in his first term to achieve any of the goals he set when he was appointed as Fed Chairman. Yet, congress will again reward failure with a second term. It's clear the the pattern of failure starts with the government. As failures continue to be rewarded and problems get glossed over instead of corrected, I am confident that in the end, interest rates will explode to the upside and the stock markets will collapse as a result.

LEARN HOW TO HEDGE

In the course of this blog, we have discussed methods of playing interest rate movement including ETFs, Futures and Options. A simple way to play rising interest rates with a bit of leverage is with the Ultra Short 20year + bond ETF (TBT). Review earlier writings to learn more about it and what I've been doing with this instrument.

As interest rates again start to look interesting, and we approach the new year, I will again be trading interest rate futures and options and will be discussing my ideas here. You can also see what I am doing in real time by reviewing Interest Rates Trading Results .