But What About Taxes??? 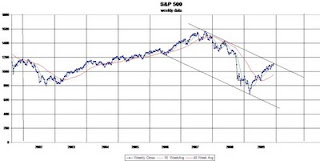 The market begins December with gains across the board. Gold is surging to the 1,200 level and the S&P presses against long term trend lines on the weekly basis. Yet even with a suspect economy, the market is not even thinking about the tax burden that appears to be on the horizon. Are taxes a good thing for the market? Is it merely a redistribution of capital from the middle class to corporate executives? It's really hard for me to figure out the logic of today's economics.

Case in point, HEALTH CARE STOCKS helped lead the market rally last month reaching nearly double digit gains in aggregate. I for one had calls on Merck which were exercised as the stock surged into the 30s at expiration. After the health care vote, MRK and other health care stocks advanced sharply. While Obama appears to be a socialist, there is no doubt that the policies being put into place will benefit the large corporations at the expense of the middle class and the poor.

At what point do taxes begin to sap the economy? Or is it that the consumer has already been taken out of the equation? This morning the talk was of the new WAR TAX, ranging from 1% to 5% on any income to support wars. Is this nothing more than corporate welfare? As a child of the 70's, I am well aware of the continuing power of the military industrial complex. A war tax will just give the green light to move on and spend even more for war.

There is no doubt that we are still in a very capitalistic environment. The government is clearly sapping money from the middle and lower class and funneling it to big business. Does big business really control the government? Think about it.

Or, Last One in is a Rotten Egg. With all of the above being said, what happens when the Fed begins pulling the plug on the extreme liquidity that they've added to the market? Well Gold shrugs it off as it surges again to the 1,200 level. Has the bubble taken on a life of its own? Will future Fed actions result in market drops? Or will new taxes prop up CERTAIN industries that have an interest in the new Obama economy????

In the end, the market is definitely bumping up against resistance. The Fibonnaci gurus are looking for 1121 on the S&P and the market confirms that it is having trouble getting up to this level. It should be an interesting month for sure.