Picking a major market move is no easy feat and those who can notably do it wind up earning millions of dollars on Wall Street. By using some basic chart reads though, we can make logical guesses on where markets might go.

We have seen a nice recovery off of the panic low rate levels. In mid-November, 10 year rates tried to break below the 2.0% level but since have been fighting their way back. 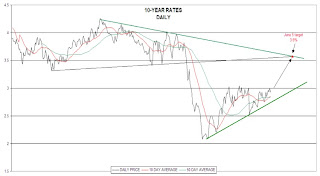 As we have discussed in previous posts, when market prices break through a key support level, the market will usually try to get back to that key level. Rates recently have been pressing up against the 3.0% level and on several occasions, broke through only to fall back. Notice however that pullbacks from 3% are weakening. Rates really want to advance or so it appears. 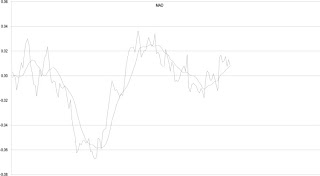 I like to look at a number of derivative views of price to help make my decisions. An important one is the rate of change of the moving average. One can easily deduce that when the average change in the moving average is positive, price is going to continue to advance. Many chartist might look at the above chart and recognize a saucer pattern developing. This is generally a bullish indicator.

I'm not sure how much longer rates can be contained. The Federal Reserve meets this week. The Fed has been known to rattle the markets with their announcements. The last time the Fed met, their decision to aggressively buy longer term treasury securities caused the 10 year rate to drop from 3.003% to 2.53% in one day! This move provided a key data point in our newest trend line which is rising.

As we run out of room on the lower boundary, unless something really major occurs, rates are probably going to break out to the upside. But there are possibilities for major events. General Motors has just announced a restructuring and as I write, a stock market news commentator is chiding the market. The Dow is opening up down 80 points and the commentator is challenging the markets. 'If you can't keep it down today ...' he says, in an apparent heckle at the Bears. I guess he thinks that the market will shrug off the GM news and eventually rally. If this occurs, then rates will probably rise above 3% today.

Another factor that must be considered is the potential effects of the flu epidemic. I can't think of anything that would rattle the markets more than closing down borders, shutting down businesses, etc because of the flu outbreak. But assuming that the markets will move forward in a normal manner, one might expect rates to break out to higher levels and challenge the two overhead trend lines.

If rates drift to this upper target, one can predict that the rate might hit the 3.6% level in 28 days, when the two upper trend lines converge.

Keep in mind, this blog is not meant to be a recommendation to buy or sell any investment product. Be sure to discuss potential trading opportunities with your professional Financial Planner.
Labels: interest rates, Treasury Notes