Swine Flu? Earnings? Who Can We Believe? 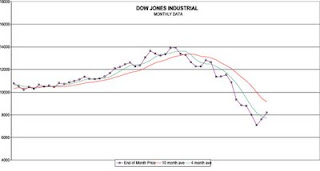 The Dow Jones average kept rolling on in April and optimism pervades the market. 'It's not as bad as we thought it would be,' everyone seems to be saying. But really, who can we believe? Who can we trust? Only weeks ago, bank executives were boasting that operating profits were achieved in January and February. And look at the earnings that were posted by banks and other companies. Banks are earning billions of dollars but yet, some expect the stress test results are going to show that many of these highly profitable banks are going to need billions and billions of dollars to shore up reserves.

And now we here news of the Swine Flu. Well, it's not even the Swine Flu anymore, it's some technical number R2D2 or somthing like that. Nope, sorry, 200 people didn't die, only 7. Soon we might learn that half of these choked on the work in their bottles of Mezcal that they were using to cure their flu symptoms. Who can we believe?

As I go through my monthly review of stocks and determine where to allocated new funds, I find myself lost, somewhere in disbelief. I don't trust the markets at all. I don't believe anything that government or Fed officials say anymore. I don't know the agenda but I don't think that it is good for the capitalist system.

I was most troubled just the other day when President Obama called certain Chrysler BondHolders "Speculators!" I don't know all of the facts, but I believe that the debt they held was "secured" debt. There is something about secured debt that means you have a very high probability of getting something in return. If not your dollars, some specific colalteral.

I didn't like the George W Bush administration because they seemed to me to rule through fear. They were bent on doing what they wanted to do and got us to join them by making us afraid. And now we are afraid again, but this was the test run. We were afraid of the flu. Schools were closed, businesses shut down. Most of Mexico City shut down and why? From the beginning, my sources in Mexico felt that the flu wasn't real. What was the government up to? they kept asking me.

It's not only here, it's everwhere. People do not trust government or corporations. What will our economy and our society look like next year? I'm a little afraid that the system that I have believed in all of my life is going to change. I fear that my MBA and 30 years of investment experience will be worthless in the coming society. I don't know the first thing about being a socialist and I am scared.