Stress Test - What You Need To Know

Tomorrow, the long-awaited Stress Tests results will be released. One thing we have learned, the Obama administration certainly isn't as secretive as the Bush administration was. Leaked reports about this bank and that bank have been spoon-fed to us. Last night we even had a test run on how bad news would be received. This morning we learned that Bank of America's Required Capital amount includes sums already loaned to the bank by the government.

While the 10 Year Note Rate bounced around a little, it's future direction is still questionable. It appeared that rates tested the high and failed. Rates then dropped down to the 3.11% level. A strong end of the day market rally brought rates back to the 3.15% level, a level it's been trading at for the past five days.

Already, the press is looking past tomorrow's Stress Test results to Friday's unemployment report. Many are already preparing for an 8.9$ unemployment rate with unemployment claims still in the 600,000 range but less than what was reported last month.

As mentioned earlier today, demand for the $22 billion in 10 year notes auctioned by the Treasury met with strong demand. High bid came in at 3.19% instead of the expected 3.23% that the market was looking for. As we saw at the end of the day, if the stock market continues to rally, we might expect an exodus from the "safe-haven" treasury market into stocks. While I remain bearish in stocks and still hold about 33% cash, I recognize that the market might move as high as 8,900 on the Dow. Note the following monthly Dow chart: 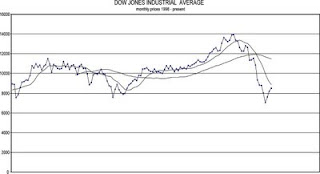