A worse than expected 30-year treasury auction today sent intermediate and long-term rates soaring today. Ten year rates blew through the 3.2% level. Two weeks ago, I discussed potential resistance at the 3.20% level and after that resistance at 3.35%. Rates approached this level before backing off slightly to close at 3.295%. I had been watching the past couple of days for a test of the highs and was expecting a breakout to the upside. Rates tried to break down on the Bank of America capital requirement report but quickly returned to the 3.15% level. Rates then tried to go higher but with limited success. This morning, unemployment claims came in a bit lower. Still, weekly claims remain high but the momentum is waning. This brought rates up through the 3.25% level. 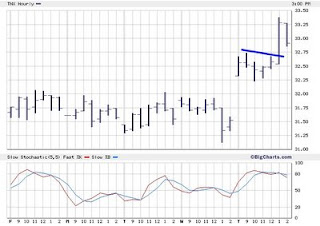 Rates appeared to be setting up for a drop prior to the 30-year auction. Notice how on the hourly chart, rates were testing the three period high and appeared to be failing. Then the disappointing auction results were reported. $14 billion with a high bid of 4.288% with only a 2.14 bid to offer rate. The market was expecting a high bid of only 4.17%. Well, as I have been writing for months, eventually the heavy supply coming to the market each month was eventually going to have an effect on rates. And now with the stock market up on the year, receiving 4% for 30 years just doesn't seem to cut it anymore. But how will this all play out?

Most certainly, higher rates are the one thing that the Federal Reserve was trying to prevent. Will they now move into the market aggressively to force rates down again? This is always the wild card in the bond market. Higher rates will certainly have a negative impact on the market. And those who escaped the stock market and went to bonds might yet again get their heads handed to them. How many heads can you lose in one stock market cycle? In the end, while rates may come down as they are well overbought at present level, one still needs to be playing rates to go higher and the dollar to go lower.

The stress test results come out in 30 minutes. How will the government manage this report to help push rates down? It will be interesting.
Labels: 30 year treasury auction, Asset Design Center, interest rates, Stock Market, treasuries