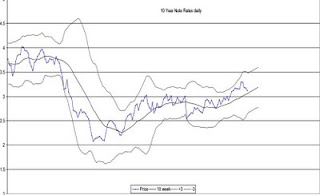 Rates dropped close to 3.1% this morning after the Commerce Department reported that Retail Sales for April again slipped, falling 0.4%. Analysts had expected sales to be flat for the period. Retail Sales Fall Further

Despite claims by many that the decline in housing prices may be near an end, Reality Trac reported that households receiving foreclosure notices rose by 32% in April April Foreclosures Rise. Suddenly all of the Wall Street optimism is beginning to fade and again, reality is starting to set in.

As rates fall more than we expected, we will be watching for the reaction at 3.06%, the rising trendline. Despite weak economic data, the world continues to be increaslingly nervous over the trillions of dollars of debt that the US is issuing. As reported last night, some have expressed doubt that the US will continue to hold its triple-A debt rating in light of the weakening of the Social Security and Medicare systems.