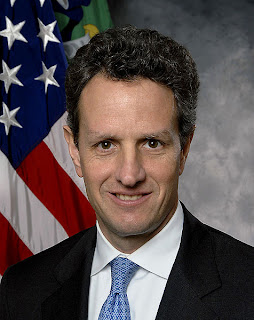 Is Tim Geitner, US Treasury Secretary looking for a second chance? Not to say that Geitner had a hand in Japan's lost decade, the dead period in Japan's economy when they went through a banking crisis similar to that which we have today. Geitner, in fact, served as the Treasury attache' to Japan in the early from 1989 to 1991. Can he refine the strategy that failed in Japan?

Bank stocks rallied overnight after the release of the stress test but still, many believe that the parameters of the stress test were too lenient. Some even believe that the highest unemployment assumptions might be questioned even as early as this morning, in 30 minutes. Almost everyone expects the unemployment numbers to be moderating. But there are still a few holdouts who believe that we are on a hellbound train. Well recognized figures such as Nouriel Roubini and investor Jim Rogers fear that we are headed for a depression and government intervention is the absolute worst thing to do.

Only time will tell how tings play out. Certainly the government's strategy to print more and more money to save the economy has been the strategy that has gotten us into this mess in the first place. It happened after the Asian Financial Crisis and after the high tech bubble burst. Each time, the government created a new bubble and the bursting got worse and worse. Now Geitner and Bernanke are truly betting the house. They again created still another bubble in the Treasury securities. Certainly should this bubble collapse, the credit-worthiness of the US Government will be as good as many of the bankrupt homeowners who just like the government, took on much much more debt than they could service.

In the end, rising rates destroyed the hopes and dreams of many who bought their homes using Adjustable Mortgage Rates. When Fed Chairman Bernanke came on the scene, he quickly raised rates as high as 6%. This truly caused the stress that we have now. Many blame it on the banks, and for sure, their predatory practices and
fancy mortgage derivatives exacerbated the situation. But for many, the dramatic increases in rates and much higher mortgage payments caused the bubble to burst. Now we are again on the opposite extreme with interest rates close to 0%. This can only lead to great inflation and another super bubble, just as in the past.