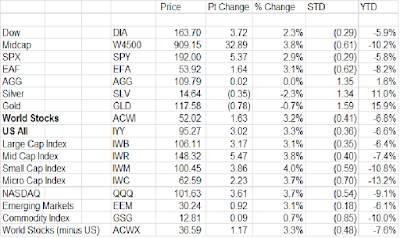 Markets seem to still be under the whim of Central Banks, their actions and statements.  Many experts believe that the world-wide economy is nearing or actually in recession.  While the job reports continue to reflect increasing employment, doubt lingers regarding the quality of these jobs as well as seasonal adjustments, which add or subtract from the real numbers based on historical factors.

It's easy though to be convinced that economies are terrible and the markets have nowhere to go but down.  I, for one, have been seeing signs of deterioration all the way back to 2005 when pundits cheered the weakening economy since it led to lower interest rates and home refinancing and wealth harvesting was all the rage.

This long term chart illustrates the 10 year interest rate.  Yes, over the past 10 years and actually, much much longer, interest rates have been falling.  These falling rates have added to market momentum but how much lower can rates fall?  And more than that, what do falling rates actually reflect?

I left the financial planning/money management industry years ago when it was clear that markets were being manipulated and that there seemed to be no real place for individual investors in these markets.  Most cheered as they viewed their quarterly investment reports seeing that everything was going up.  But that means just one thing to me, and that's the flip side of this.  When things start falling, everything will be falling.  There will be no place to hide.  It's not rational that both stocks and bonds rally to their highs at the same time.  A strong economy will reflect high stock market prices but also, the demand for money will increase, causing interest rates to rise and bond prices to fall.

When we see both investment areas at their highs, one has to ask, which market is telling the truth?  In the past, the sheer size of the bond market would prove that the bond market is the true indicator of what is happening.  Low interest rates and high bond prices reflect just one thing, weak economies and a lack of demand for money.

This chart shows the daily price of TLT, an ETF that allows the investor to trade the 20 year bond.  Observe what happened last week when the market was falling.  Bond prices surged even though they are already at very high price levels.  The spike we see shows that the US bond is the global catch-all of money.

The upward trend of this instrument, to me, reflects either a flight to safety as many expect the stock markets to continue to decline, or a reversal of central bank policies and either a hold on the Federal Reserve raising interest rates any further, or the Fed eventually moving to Negative Interest Rates, similar to what other central banks around the world have been doing.  Bonds rise when interest rates fall.

So, where does this all put us with the stock market?  First of all, let's look at the long term chart.

Price continues to fall however at the end of last month, it appeared that we tested and held a previous low level.  The stochastics indicator, at the bottom of the chart, shows momentum is moving to the downside.  I've noted in the past that each time we touch the 40-month moving average, the moving average in this chart, the market has held support and rallied.  So for the long term, I still believe that it is prudent to buy at or below this trend line.

Should SPY end the month up, it will appear that we have formed a monthly base.  That would be fairly compelling to be invested in this market.  I would also be looking at my various indicators to add support to this call. 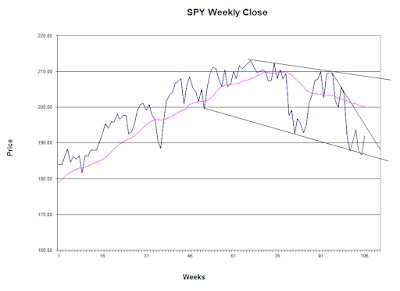 On the weekly chart, we see support holding at the trendline, however, it appears that we are merely bouncing with some very strong resistance coming in a few points higher. 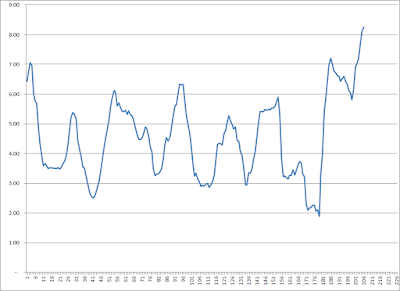 This chart, which illustrates momentum, is still rising.  The rule remains, as the momentum increases, stay with the trend, which on the weekly basis, remains down.  So this is a negative and a reason to be cautious. 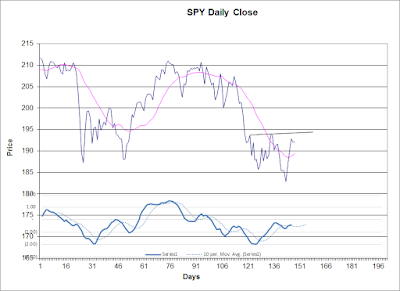 On the daily chart, one could expect that prices will move to the neckline shown, a couple of points higher than the current level.  This will be important resistance.  On the surface, I would expect prices to fall from that level but how far it will fall is anyone's guess.  I'd still go with the 40 month moving average as support.

If you notice the 20-day moving average, it is now moving higher.  We will have to watch this more closely to identify a change in trend. 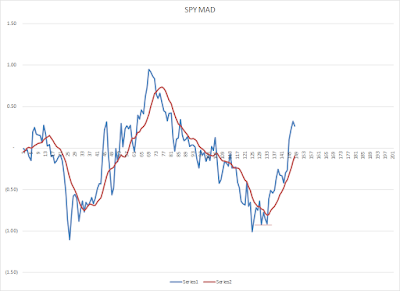 In summary, we need to see what happens at the 195 level, if that level provides strong resistance or not.  Then we see how price moves against the 20 day moving average, whether that will now provide support.  While next weekend doesn't quite market the end of the month, there will be just one more day left, Feb 29.  The monthly view may shed more light on where we will be moving for the long term.