Who would have guessed that the markets would finish the week up after experiencing tremendous volatility during the week.  China reported slower growth than expected, while Oil kept collapsing, reaching low levels not seen in years.  But again, world Central Banks did what they could to throw the market a bone.  China added stimulus to their economy while the EU jawboned the market up with the same rhetoric we've been hearing for quite awhile now from Mario Draghi, we will do whatever it takes!

As we can see in the SPY daily chart, we hit lows low enough to cause market panic.  Then just as quickly, the market recovered to close up on the holiday-shortened week.  SPY, an exchange traded fund that replicates the Standard and Poor's 500 index, finished at 190.52, up 1.41% on the week.

Where we go from here is a harder call.  In the above chart, it appears that the 20 day moving average can act as a magnet and pull price up to it.  The trend is falling though and we all know, or should know, that the trend is your friend.

My normal expectation in this scenario is to loo for a drop, probably as early as Monday, that would test Wednesday's closing low price of 185.65.  Should we hold that level, I would expect a move higher. 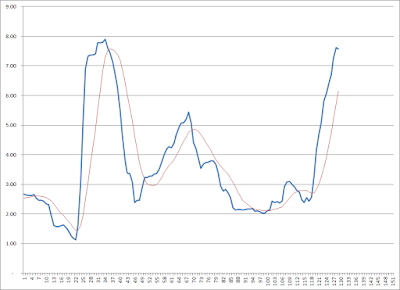 Another reason for some level of optimism is the Size chart.  It reversed ever so slightly.  My general rule is that as long as this Size indicator is increasing, you stay with the trend.  When the indicator is declining, prices tend to drift towards the trendline, sideways.  Still as we can see in the previous move to similar levels, there were a few bumps in the road before the indicator finally turned lower.  So I'm not convinced based on this.

I do see some trend line support, on line charts 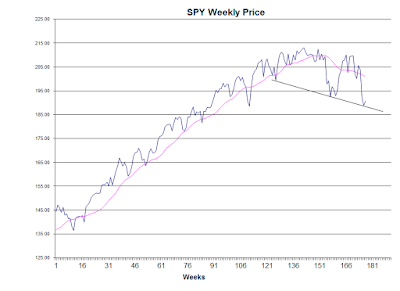 As this weekly chart shows, we may be holding a channel, albeit a downward channel.  It does provide some reason for hope that the market will provide a decent rally from current levels.

Finally, we continue to remain within the long term monthly channel. 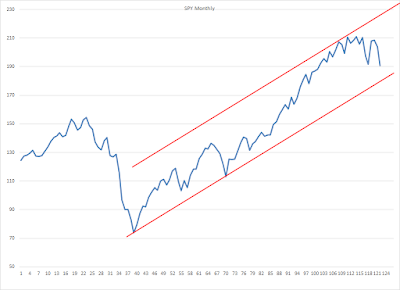 I had been waiting for a test of the August monthly low around 191.60 but it didn't happen in December, as I anticipated.  Yet, despite daily noise that has whipped the market all over the place, the monthly view shows that we are either testing the previous lows or at worse, testing the bottom of the long term channel.

If I wasn't exposed to all the noise or various market commentators, I'd say that the market is still in pretty good shape.

I like to see test of low levels that provides support.  First level of support would be the daily view.  A successful test of the 185.65 close would support a short-term bounce.  And, a positive close on the week would provide support on the monthly basis.  Should Friday's (12/29) close be at 191.61 or better, I expect to be buying.  Should it fail, expect lower lows.  But I'm still not convinced that a major downtrend is in place until we break below the monthly trendline just below the 180 level.