No Change in Outlook 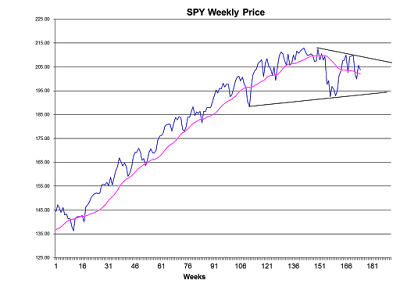 SPY closed the year at 203.86 after struggling to close positive for the year.  Possibilities exist to break out in either direction n the future but for now, my outlook remains the same as before.

I had expected weakness in December with prices testing the August/September lows.  My target may have been postponed due to end of year window dressing, when institutional traders take advantage of low volume to move the market to their desired levels.  One must be aware that many receive bonuses based on how the markets close on the year, so there might have been some serious interventions, in both directions.  Certainly, the "Santa Claus rally" two weeks ago caused many to wonder if the market might make it to new all time high territory.  But other forces stepped in during the final hours of the trading year to bring prices down, closing the year negative.

One cannot underestimate the significance of the negative performance for the year.  When one considers all of the tools and manipulations that have been used to push the market ever higher, year after year, the fact that it could not eke out minimal gains may indicate that true market forces are taking over.  It's my basic philosophy to make sure that I am always holding some puts to protect against the ultimate flash crash that is sure to come, without any notice and without any time to react.

This next week, I'll be looking for SPY to test the recent low at 200.02.  The market may open up positive though on Monday, possibly testing the recent high three days ago.

We can see the similar three period test here as well, on the upside.  So it's possible that first we test the Tuesday high and if we fail, then we head down to test the three week low.

It's quite possible that there will be buying to open the year.  New money will be coming in as usual.

I'm still favoring more downside though, staying within the parameters defined in the first chart.

I think that while there will be volatility within the 190-210 band, prices will be confined.  With that in mind, I have been selling Iron Condor spreads (credit call spreads and credit put spreads) to take advantage of the declining volatility.  I also am long some puts, out to March, just in case we do get a major selloff.

This chart shows the change of the 20 week moving average.  As seen, the moving average is more or less neutral, with a slightly downward bias.  This also is favorable for the Iron Condor strategy as the market is not really trending.

Another important consideration is that the volatility level continues to decline. 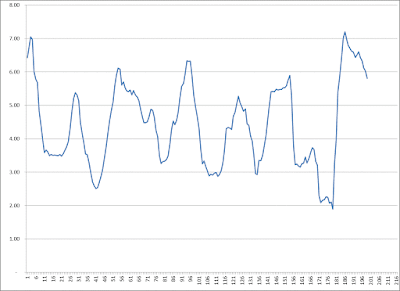