SPY continued its rally this week closing at 203.27, up nearly two points on the week.  The rally appeared to be incited by continued Federal Reserve Bank inaction and comments from Fed Governors suggesting that rates won't be raised at least well into 2016.

With the Fed's market PUT in place, one could only expect continued currency devaluations contributing to strengthening asset prices, including stocks.

While stock price momentum continues to increase on the short term (4 day average), across other time frames, momentum is falling indicating that reversion to the means is probable. 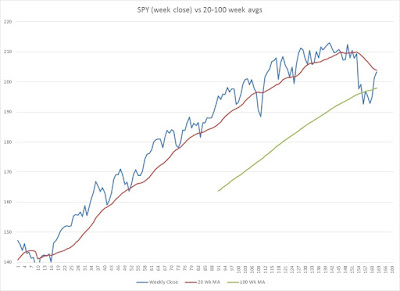 The above chart shows SPY weekly price approaching to 20 week moving average after nicely bottoming with a three week test of the low on September 25 at the 192 level.  When the successful test occurred, the question was how far the rally could go?

As the chart indicates, the 20 week moving average is declining and appeared to be the first level of strong resistance.  The second area considered as resistance was the 204 level as on the daily bar chart, that appeared to be the neck line of a head and shoulders top formation.  This can be seen in the first chart.

On the very short term, the four day standard deviation has sometimes approached 1.50 on very overbought occasions.  As my four day momentum indicator continues to rise, it is possible that another thrust forward can occur.  Something powerful will need to occur to push prices above the 20 week moving average and break through the apparent head and shoulders neck line.

Translated to price, that would see SPY rise to 208.  Should that move happen in the next week or two, it could result in new dynamics coming into play which could result in short term SPY prices rising as high as 221.

MY THOUGHTS ON THE MATTER

Seeing that on the momentum side, it is declining on nearly every time frame, premium selling on price spikes looks to be the best strategy.  Credit spreads can be employed to limit possible event risk.