Was Today the TOP??? SPY Thoughts 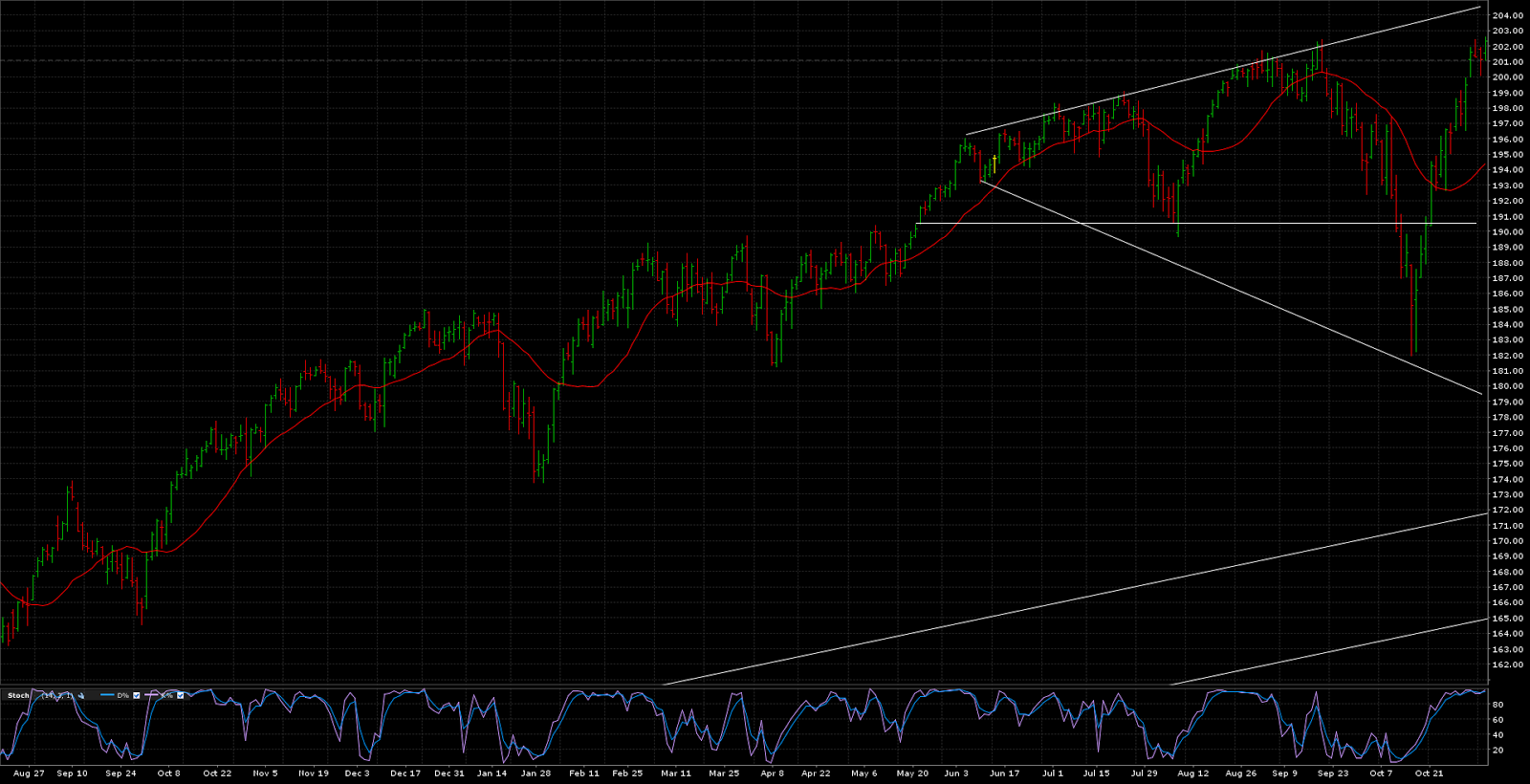 Changing of the Guard.  Republicans gain enough seats in the Senate last night to now hold a majority.  The market could have gone much higher as the upper line indicates, but it didn't.    None-the-less, the market gapped up on the open.  SPY closed up 1.27 to close at a new all time high of 202.34.

While the market may not yet be exhausted, I certainly am.  I saw that it was up early in pre-market and saw the open, up some 12 points.  This rally has persisted for three weeks now and seeing the same thing, day after day, stocks up, gold getting dumped, it's lost its appeal.  Just downright boring.  My put positions are concentrated in the December 19th expiration with a growing position in the January 16th time frame.

The chart above includes after hour trading and shows a three day topping formation.  While today's high was higher than the high of three days ago, looking at the daily movements on the standard deviation chart shows divergence.

You can see that today's standard deviation high was just a slight up.  Often this test of the high is just as valid as a price test.  With that in mind, I hold out hope that this might be a top.  Other momentum data shows continuing strength however so I am not so confident that the market will fall tomorrow.

But again, the move is really long-winded but if you look at the standard deviation chart, you can see that the last big move we had, off of the August lows, looks just as persistent.  The wave structure is very similar with a base and then four peaks before falling back.  So let's see what happens.

It took the market about six weeks to fall from the top last time.  If we follow a similar scenario, that would bring us right to the December 18th expiration date. 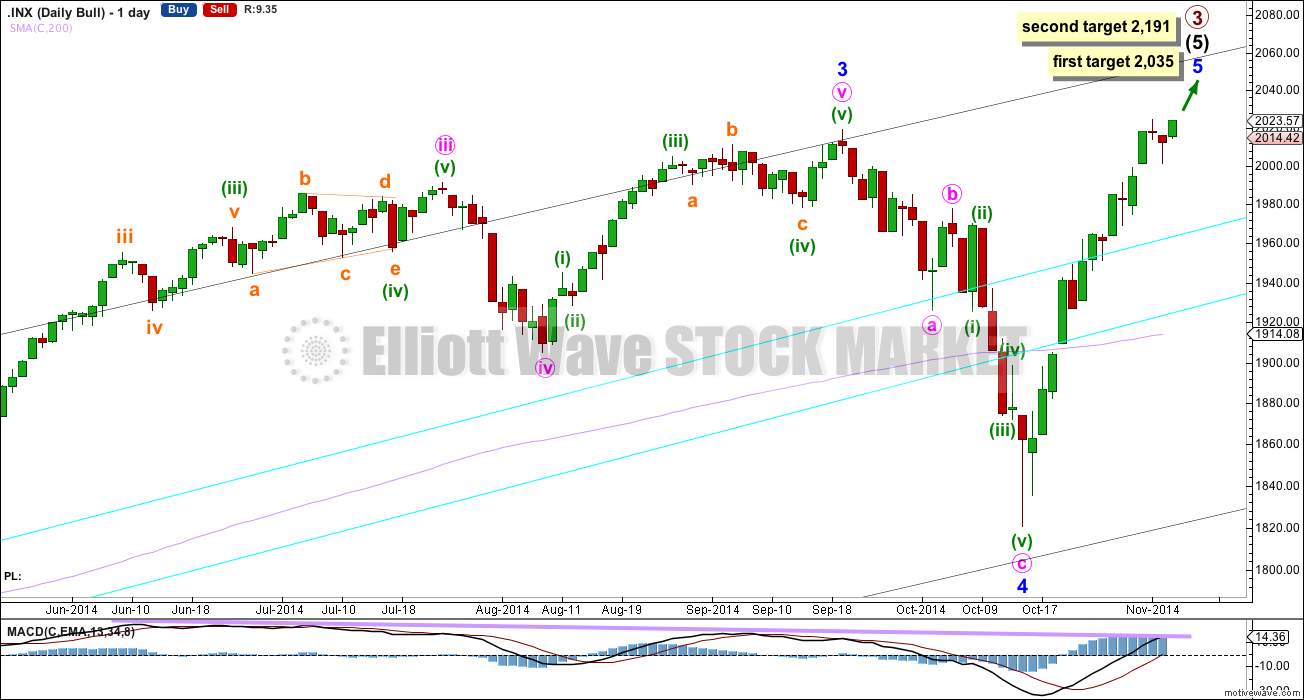 If I may steal a chart off of Lara's Elliott Wave page, one thing that she notes is that SPX broke a well established trend line at the 1914 level.  She suggests that this indicates a shift in trend.

Got to think that the market will quickly test this level, which comes in around 1940 now.  If it does break through this trend line, then a test of the lows would be the next stop and then the potential for a range of Fibonacci retracements that could go as low as the 145 SPY level.   My minimum objective is 170.

This to me is sufficient reward potential to stand pat with my put positions.  As I discussed in a previous blog, I really don't feel too comfortable playing the market to go up.  Yes, here are many stimuli into the market, including possibly tomorrow with the ECB weighing in on the equation.  Some expect that the currency wars will continue as Japan went all in with the money printing, causing a dramatic drop in the Yen.  Will the ECB follow suit and attempt to do more stimulus?  Well, I wouldn't be surprised to wake up tomorrow and see the markets up sharply again on ECB stimulus.  It is a broken record here, playing the same track over and over and the market continues to react strongly on any positive word out of any Central Banker's mouth.

I can't buy into that.  It's not real.  It's computers reading headlines and entering orders, manipulating the prices higher and higher.  There is no intrinsic value here.  It's all air.  Free money buying massive positions.  As we saw last time, there is no risk for these entities to borrow as much money as they can and buy as many risk assets as possible.  Heads they win, tails, they don't lose, they get bailed out.

But since the 2008 crisis, nothing has changed.  In fact, it has gotten worse.  more and more credit in the system.  How can the system stay afloat?  It is truly a Ponzi scheme, continually borrowed money props up the market.  If an entity is close to default, they just borrow more money.  The worst junk on the market now trades as a virtual risk-free asset.  In fact some government securities put out by countries in far worse shape than the US pay lower interest rates than the "risk-free" US Treasuries.

So my money will continue to be on the downside because there is far more profit potential on the down side, in the long run, then on the upside.  At least that is how I perceive things.  This could change, if the system finally gets cleansed.  But for that to happen, we will have to go through lots of pain.

I worked in the financial industry in 2000 and 2008 and the market melt-downs always resulted in my getting laid off.  And the worst thing about it was that I was even calling the market correctly.  So I should have been buying puts then to hedge my income.  The way I see it now, as long as the market continues to rise, I have very good financial security with my professional position.  Should the market again crash, my job security could be in jeopardy.  So quite frankly, I'm not so concerned if I'm wrong right now with my put positions.  I won't be worried even if they expire worthless.  I will keep adding to my position in further expiration dates.

Should the market again crash hard, I'll be the one shouting out, "Looking good, Billy Ray!"