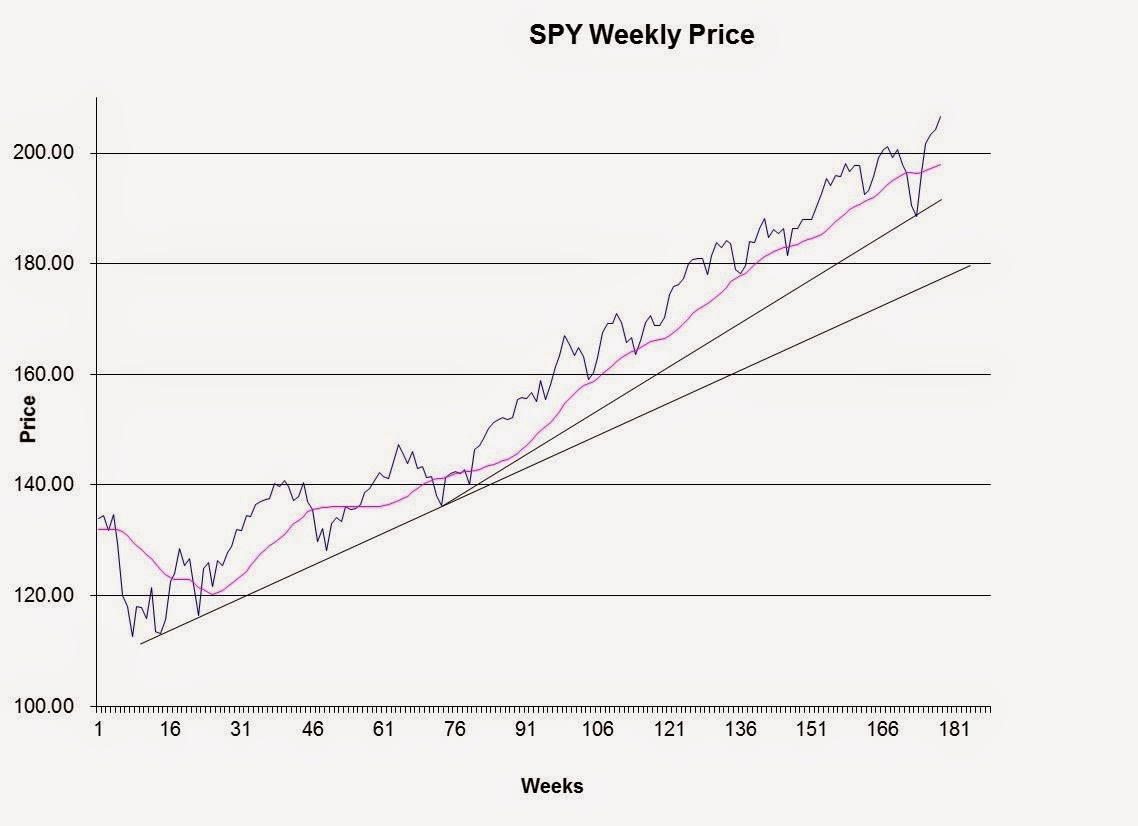 Another day, another Central Bank action somewhere in the world.  Weakness in China resulted in a rate reduction, but China's interest rate is well above rates in Europe and US so there is certainly more news out of China to come in the future as the race to devalue world currencies continues.

The S&P has gone up for five straight weeks now without a pause.  Friday marked the 26th consecutive day that the SP closed above its 5-day moving average.  This has only happened one other time since 1950.  There is no indication that the market will sell off next week as we approach the Thanksgiving holiday.  Trading activity will likely be slow enabling the market to rise ever so higher with little to no resistance. 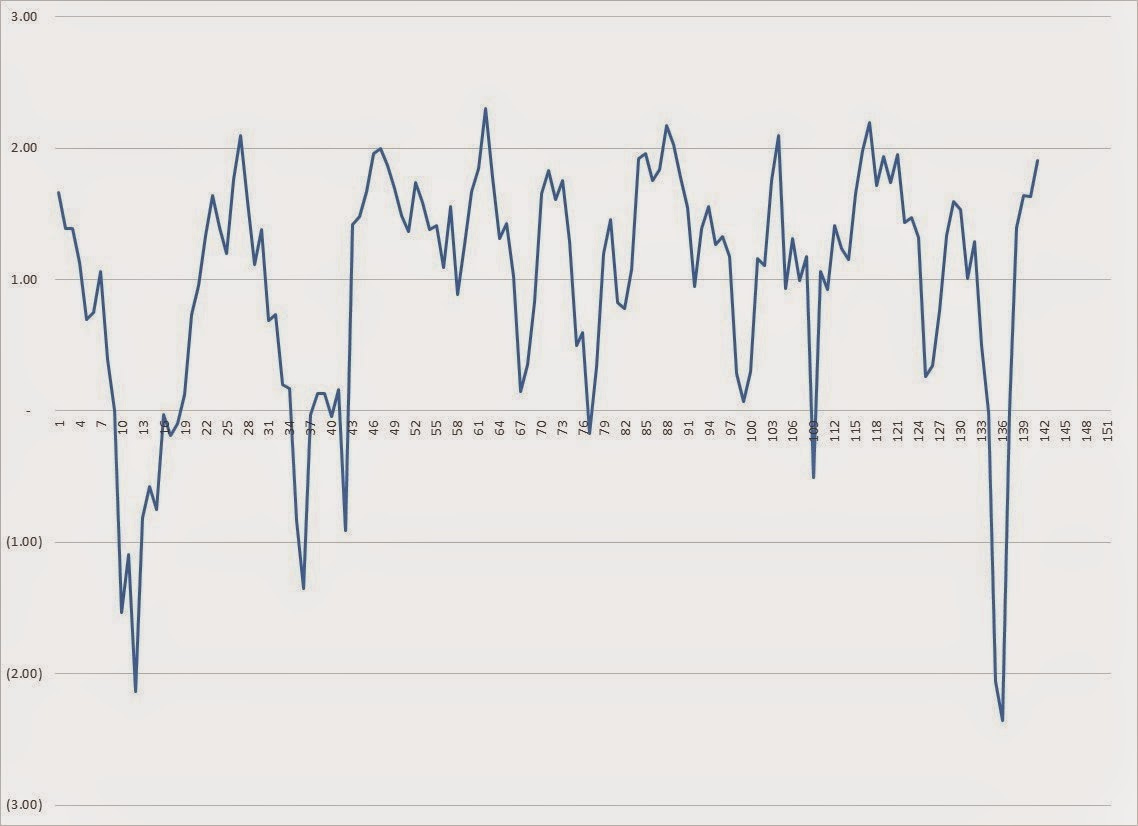 The dramatic move up is illustrated also in the Standard deviation chart, with price going straight up after reaching oversold levels.  The last time S&P reached the -2 level, it also rallied back up to the +2 oversold level before finally regressing back to the mean. 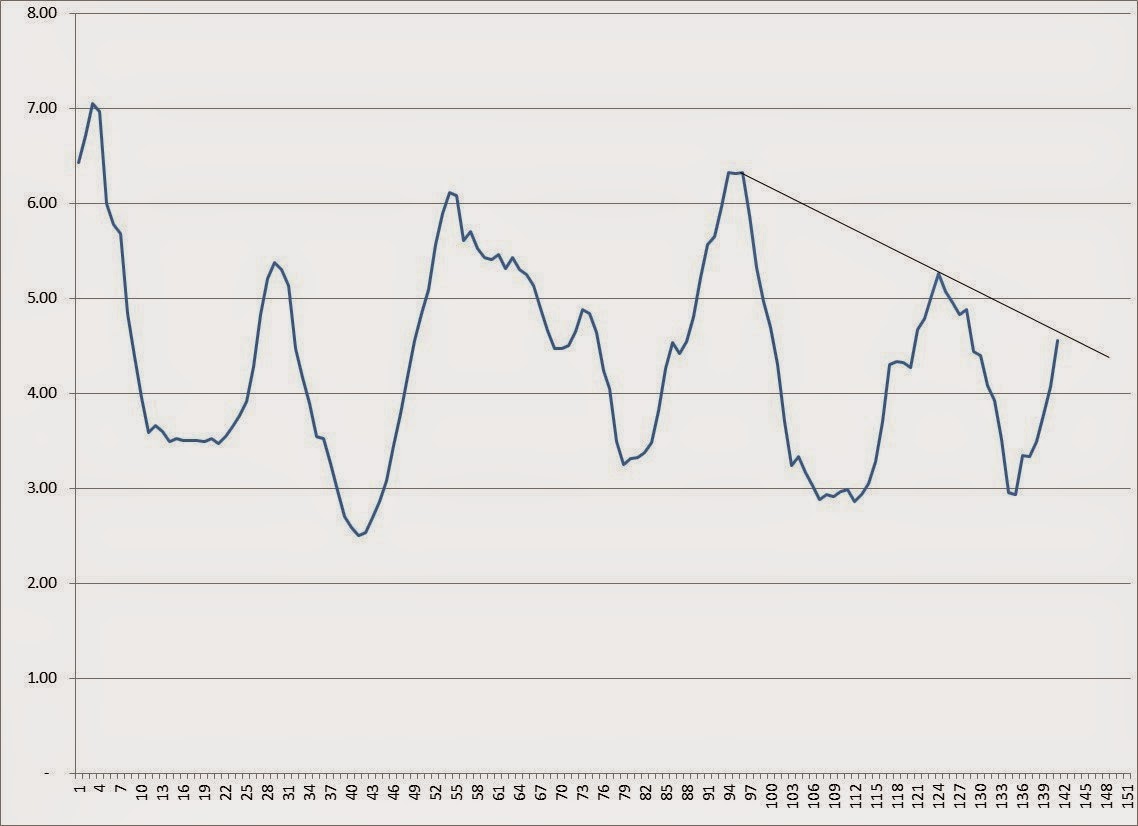 Size, more commonly known as Band Width continued to rise but could possibly be meeting some resistance based on the downward trend.  The basic rule remains, when Size is rising, stay with the trend.

Finally, the rate of change in the moving average may also be reaching a resistance level. 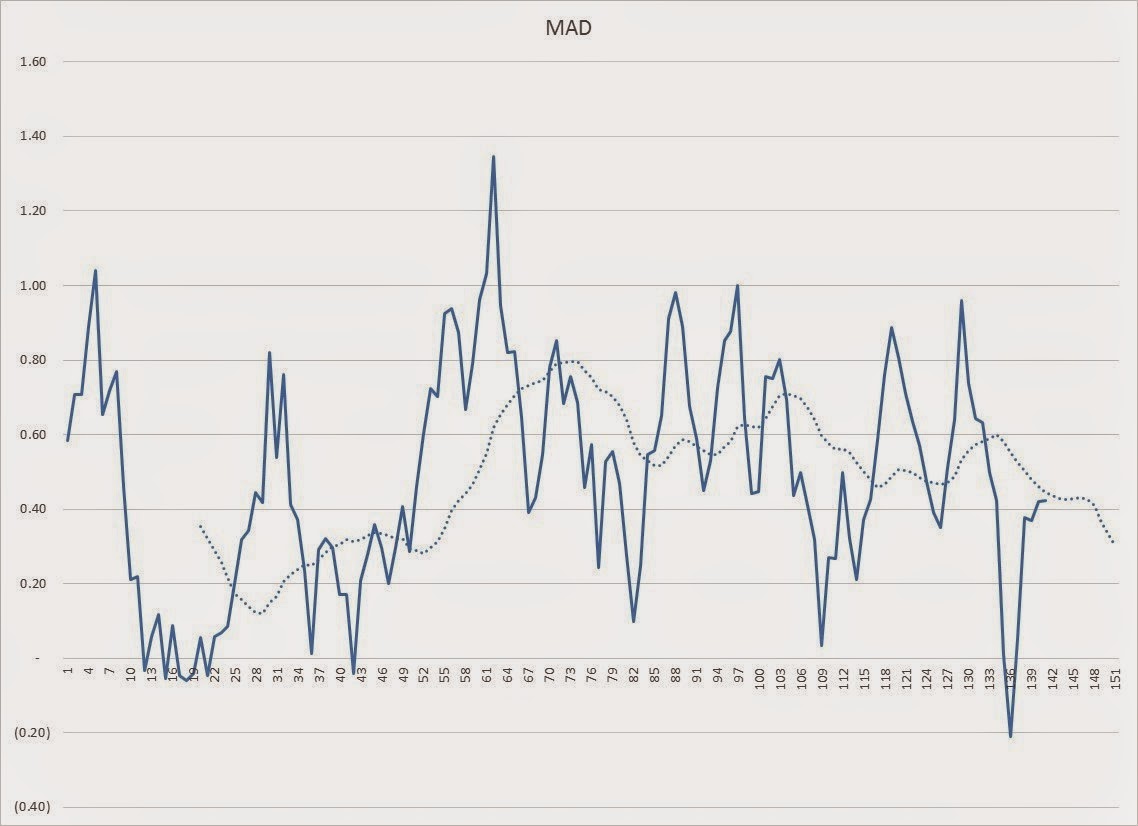 I'm not sure that it's possible for the market to have any down move anymore that isn't interrupted with some Central Bank action or Federal Reserve comments which causes the computer programs to ramp up the market.

I'm not sure what is going on in the market anymore.  Many suggest that Central Banks are actively buying stocks and that is troubling.  There appears to be an unlimited supply of money that can be directed towards the markets and at this point, few sellers.  Volume has been light and it would be interesting to see the actual volume of individuals as opposed to computer algos.  Not sure that it is a market that average people should be in.

Many people practically "harass" me as I refuse to have my 401(k) money in anything other than cash.  Everyone is so convinced that earnings are great, the Federal Reserve has their backs, there is no inflation, etc.  The power of the press I guess as they are by no means market experts.

I remain with large put positions having expected some retracement by now.  I had only a few November puts with the bulk of the position in the December series and some "recovery" spread positions to recoup my put investments should the market move drag on out until next year.

Last week, it appeared that the market would run up to 207 based on the 4 week standard deviation.  It appeared at that time that a test of the STD high would bring the SPY to 207.  Looking at the 207 level, I saw that Size continued to be expanding so I bought some Dec 205 calls.  At this point, I'm going to let things ride until we see a reversal.  I'm not quite sure anymore how deep of a retracement we could get.  After six years of steadily rising prices without a 10% correction, it's my opinion that the market will probably go parabolic, perhaps even doubling from current prices before the move finally ends.

One thing that I've learned from more than 35 years of market activity is that the market will find a way to take everyone's money.  I have yet to hear the cab drives, barbers or other neophytes telling me how much money they've made and how good they are in the market.  Well, I've heard some but not what one hears at market extremes.

Good luck.  It's OK to play the market to go up, but continue to buy protective puts.  While it might be money out the window at this moment, when the market finally cracks, there will be no short covering profits to be had as all of the short sellers will have been out of business.  It's going to be nasty.  But who knows when?  Not me.