We see a very dramatic move here in the past month.  Will the US equity market follow this pattern? 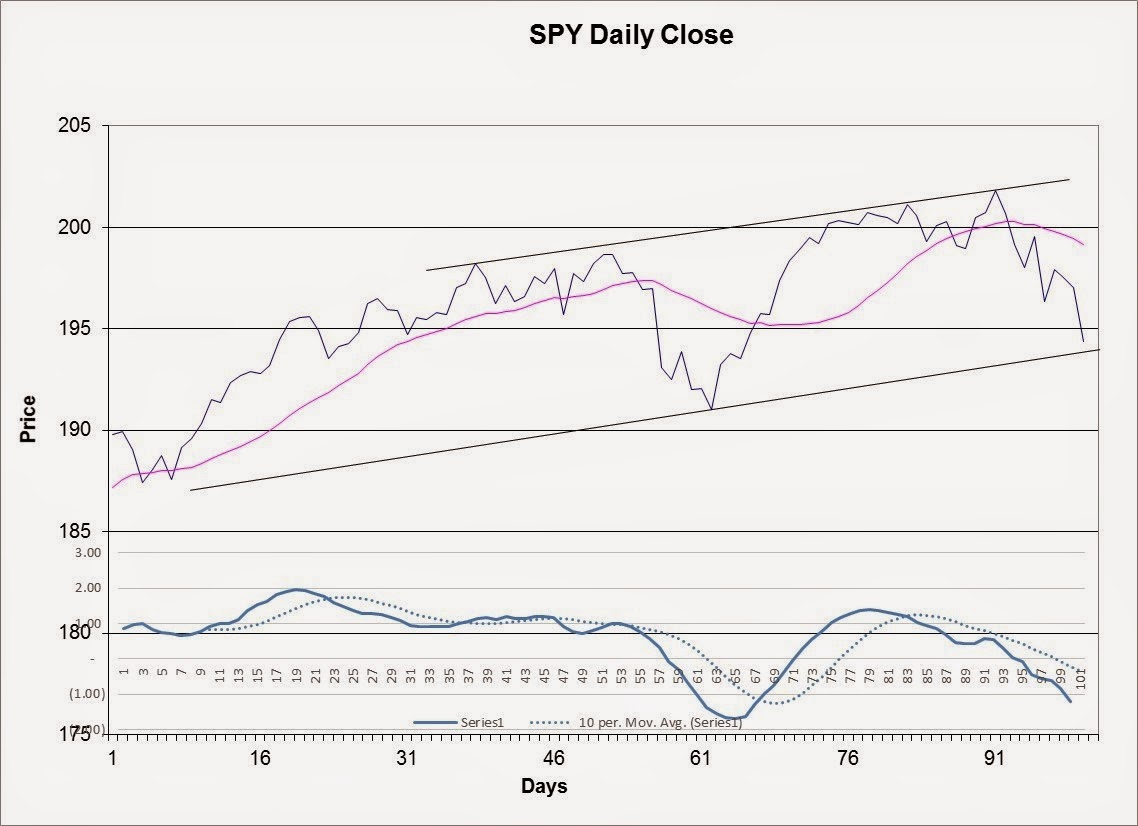 While the drop seemed quite dramatic, it was not unexpected.  I illustrated this chart over the weekend and mentioned that the 194 level, the bottom of this well-defined channel, would present some formidable support.  Sure enough, prices appeared to want to collapse even further at the end of the day but managed to stay within the constraints of the lower channel line.

I had been looking for the three-day test of the low yesterday and prices held firm.  But I didn't want to broadcast a buy signal as I had read that there was something like $400 billion in Federal Reverse Repos, whereby banks can get their hands on short-term cash to pump up the markets at the end of each quarter to make their portfolios look good.  I thought that if the investment banks really had this much ammo and the market still closed down, had the Fed money not been available (at negative interest rates mind you where the Fed was paying the banks to take the money), the market might have really tanked.

Sure enough, this morning the market opened down and continued down taking out several areas of support.  Another key area of support was the 196 range which is the 20 week moving average.  This has held firm over the past two years but today, the market cracked through. 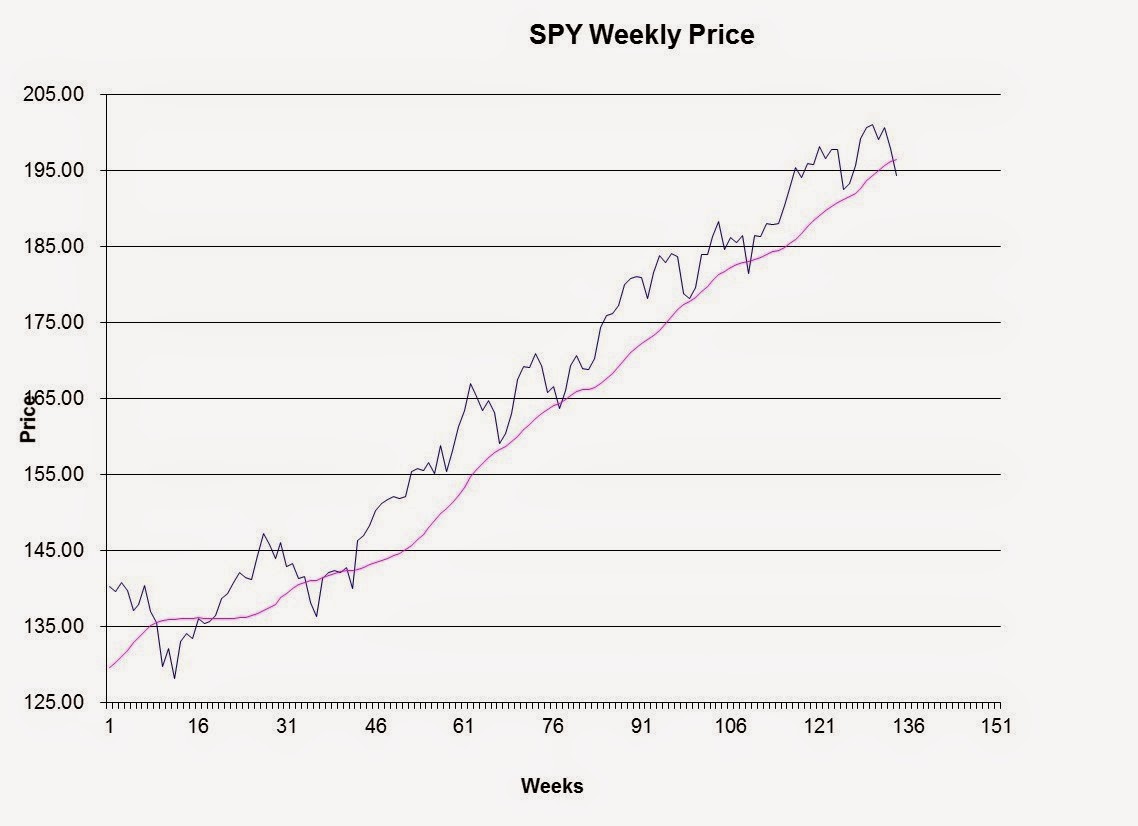 I mentioned over the weekend that I thought that it might be possible for the market to first hit the bottom of the channel early in the week, then rebound to maintain the 20 week moving average.

Tomorrow, Mario Draghi, the head of Europe's ECB, will be making news about Europe's QE activity.  Like in the US, they also are expected to be buying bonds, adding liquidity to the markets.  Thus far, this hasn't had much effect on Europe's economy, but they really don't know what else they can do I guess.  The bottom line is that whenever a Central Bank announces something, pretty much anything these days, the computers kick in and start doing program buying.  Will that happen tomorrow?  Or will they do a switcheroo and tank the markets?

When I look at the daily standard deviation chart of SPY, I see a higher low pattern forming. 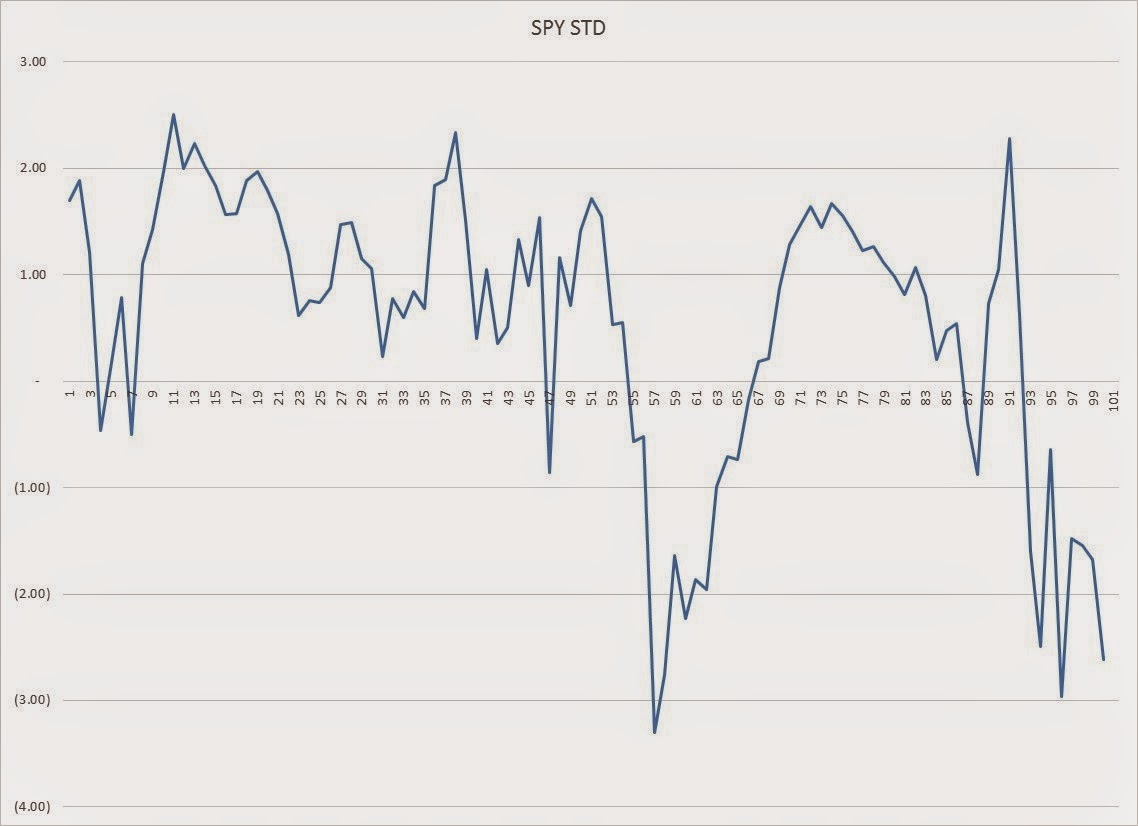 And although it appears that the Standard Deviation is poised to rise, it might not make a difference because of the Size chart. 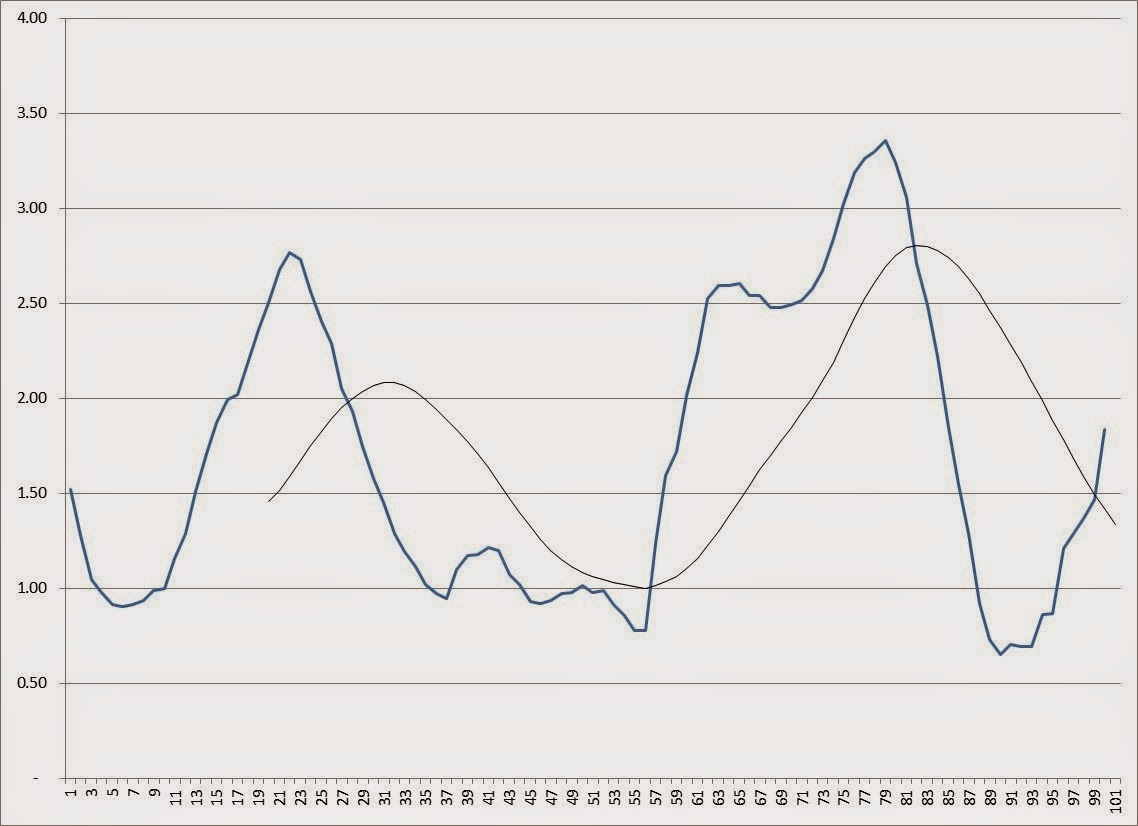 Size, or volatility, is rising now so it's possible for the market to continue lower if size continues to expand, even if standard deviation begins to rise.

To illustrate this better, you can look at a daily chart with the Bollinger Bands included and you will see that the bands are now widening.  This is represented by Size.

As I mentioned before, one of my rules is that you stay with the trend when Size is rising.  It is, so this is an argument for holding bear positions for the market.

I am not yet seeing the 20 week Size expand yet.  It would take a move to 188 or lower for the 20-week size to begin expanding.  If that were to happen, I think that we all know that that would signal still lower prices to come.

I can get a better idea of what the future could bring by looking at the short term weekly charts.  Keep in mind though that there are still two days left before the actual weekly number gets posted.  It's just to give me some early perspective on where we are on a short term weekly view. 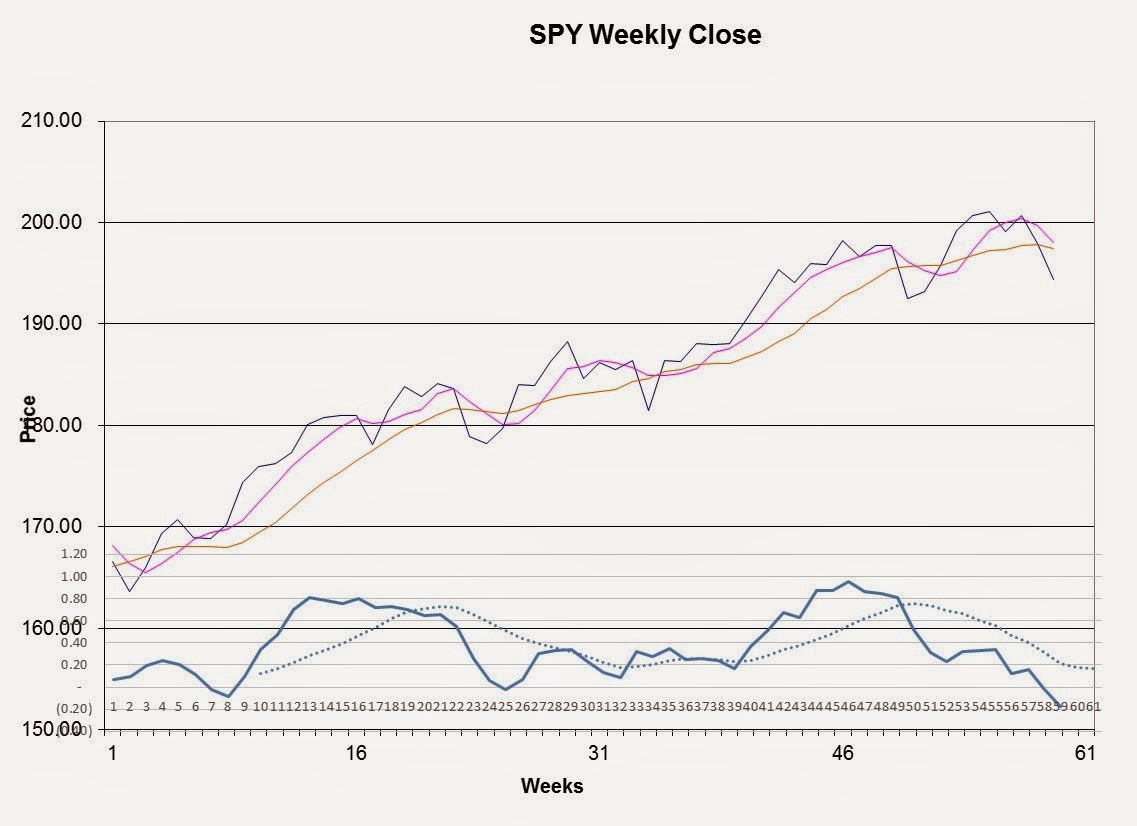 This chart appears much more bearish than the 20 week view.  We can see that price has moved decidedly through the 10 week average after finding resistance at the four week average.  The four week average should be crossing the 10 week in another week so we would normally expect price to rally to test that junction.  If it failed to rally above the junction, a serious sell signal would be in play. 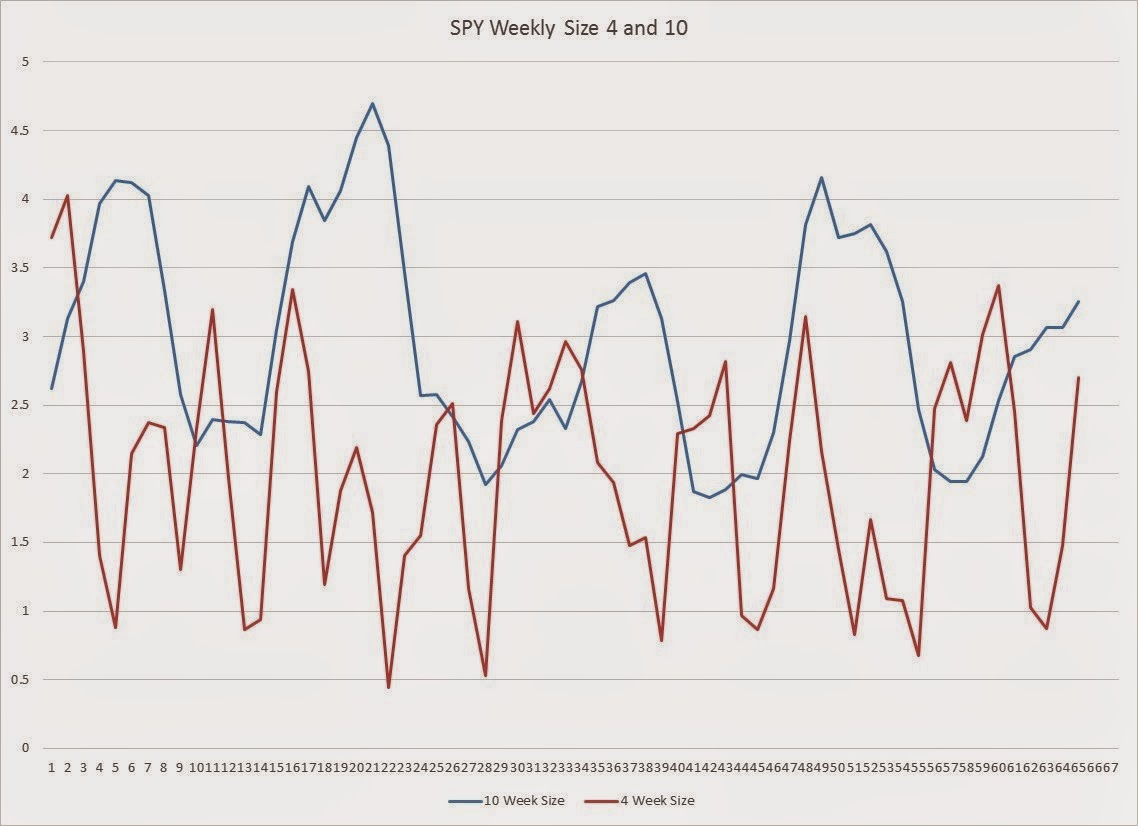 Further supporting this bear scenario is a Size chart showing both the 4 week Size and the 10 week Size.  Both are rising so with my rule in play, on the short term weekly outlook, you would expect further downside.

Still two more days to go with an ECB announcement tomorrow.  Who knows, the bulls could wind up carrying the week.  Anything could happen and that's why we love doing this.  Despite the best of ideas, in the end, it's all a crap shoot.  But we do our best to try to solve the puzzle.