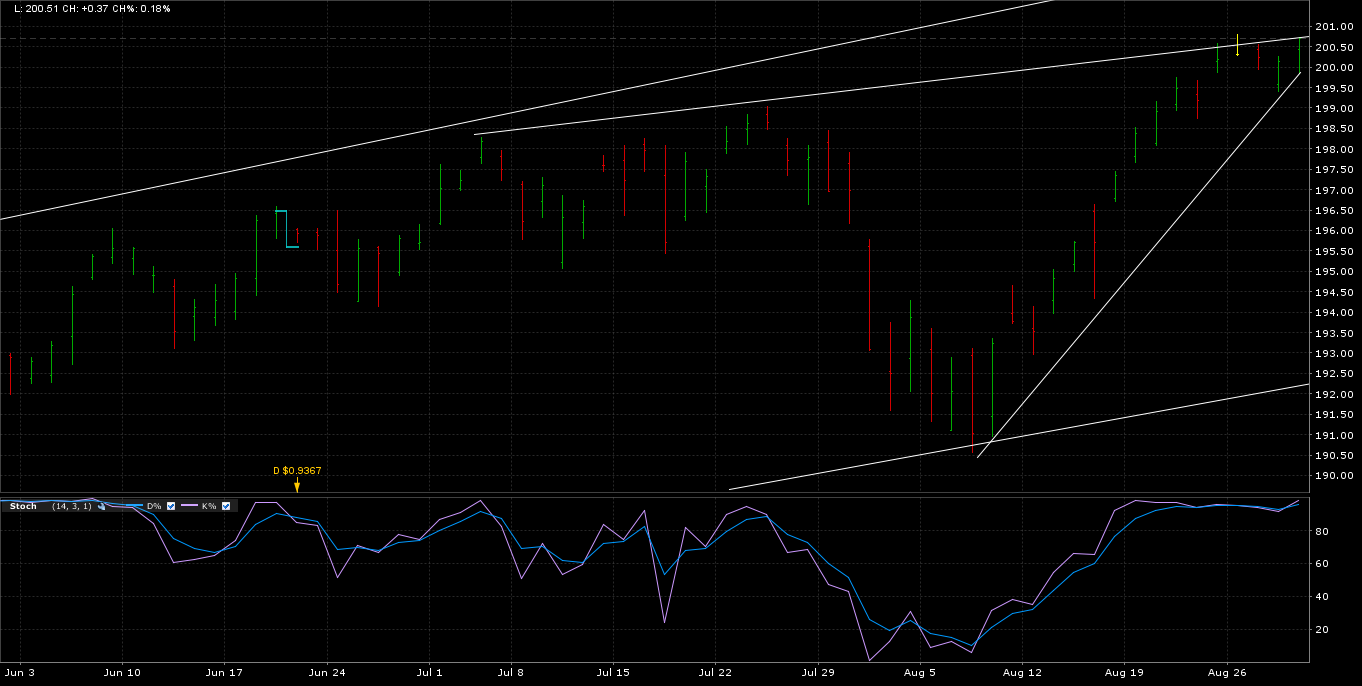 Markets staged a late recovery Friday in light, pre-holiday volume to push SPY to a new high, beating the high of three days ago.  It appears that the market will make another leg higher, perhaps as high as 204-205.

Daily Size, a primary momentum indicator, also continues to expand with no signs of letting up.

As long as my Size indicator continues to rise, one must stick with the trend.  When Size reverses, we will sell call premium above the market.

It's also possible that a topping formation, such as a failure of a test of the high, will present itself.  That would be an encouraging sell signal.  It would only mark a short term sell though as we would look for a rebound in price, in a new attempt to challenge the highs within a month.  Should a test occur and fail, At that point, we would enter into a short position in the S&P E-mini contract, expecting a sizable move down.  Until then, indicators show that there is still upside momentum that may take at least another week to resolve.

While I have started buying put spreads on SPY, and they are not faring so well at this point, my junior gold stock Allied Nevada Gold Corp (ANV) gained $0.41 to 3.82 this week, more than offsetting slippage in my put positions.

I'm wondering if hot money could be moving into the Junior Gold sector in anticipation of geopolitical turmoil.  So far, no news has been able to put a dent into the stock market but that could be because there do not appear to be ANY sellers.  There appears to be a widespread belief that should the stock market fall, the Federal Reserve will prop it up.  It's no secret that Central Banks have continued to print more money and buy stocks.  I suppose if I had a money making machine and was buying stocks, I would print more money and buy stocks on any dip.

This could be extremely risky however as there is a general belief that if the assets held by the Federal Reserve were marked to market, it would be deemed insolvent!  One could only imagine if the Fed was buying huge amounts of securities and the market fell dramatically.  Well, I suppose that as long as we don't really know the truth, it probably doesn't matter.

But you know, the risks are pretty high.  The charade can't continue forever.