World markets dropped sharply as US economic news added on to fears that Greece and other European sovereign debt has become the new sub-prime debt. The Dow Industrial Average ended the day below 10,000 for the first time since November, but clawed its way above the key number during settlement. It closed at 10,002. The S&P Index also made new lows. We have been following this move since the beginning when the S&P triggered the Stop and Reverse sell signal. The news doesn't really matter. The truth is, the market has been tired for a long time. Much of the run up has been due to institutional trading, employing massive amounts of liquidity injected into the system in an attempt by the government to stabilize a plummeting economy.

That party is over now and it's sure not going to be pretty. I for one am one of those super-bears who believe that the market will at least test the previous lows and possibly break through. This, in itself, is not bad if you are prepared as we are. We have not been in the market this year except for ultra short positions in the Dow Jones (DXD) and Bonds (TBT). 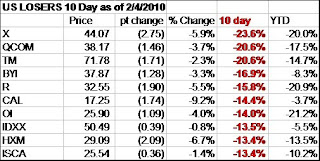 That the market was poised to fall had appeared obvious for a number of days. We have pointed out how certain stocks that were the favorites last year have been dropping hard and fast. If you look at the losers on the list, you'll see that the losers are not confined to a specific industry but range across all sectors. It was inevitable that the overall market would eventually follow. With many stocks down 20% already for the year and the US Market just down 4.5%, it's very likely that more significant market downside is probable. 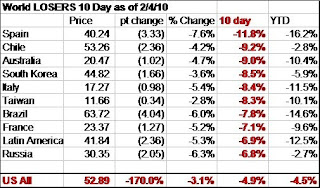 As bad as it may look here at home, the rest of the world looks even worse. A lot of it is due to a stronger dollar against other world currencies. The Japanese Yen is doing even better, having gained 4.7% thus far in 2010. As a result, losses in Japanese markets have been moderated by gains in the currency. The Japanese Market ETF (EWJ) is THE ONLY world market ETF that is up. It is still +1% on the year