Market Rumbles, Is This "THE BIG ONE?"

As Earthquakes continue to rattle the Carribean region this morning, shaky bank earnings, rising rates in China and continued weakness in the EuroFX all shook the US markets this morning. Can this be the start of "THE BIG ONE?" You know what I mean. The equity markets have been running higher and higher, non-stop since last March. Just notice how far the SP Index has run in just a couple of months? If you believe that this is normal, the you may be seriously mistaken. We have been running on fumes for a very long time; or more government stimulus and promises of eternal low interest rates. Notice though that today's market move brings the price level down to a dotted line indicating the Wilder Parabolic mark.

This indicator signifies trend changes. Once the price crosses through the dotted line, the follower needs to Stop-and-Reverse, meaning, sell your position and take a short position. Notice how well this indicator has worked during the two major trends in this chart. The indicator does not work well in sideways markets though. Bollinger Bands are the preferred tool in consolidating markets. Following the Wilder Parabolic would cause you to constantly be buying the high and selling the low. Thus it's important to use other tools to help you navigate the market. Still, one needs to be looking at everything and knowing the implications of various indicators.

I don't mean to be crying wolf. After all, I got out of the market in June last year and now am just utilizing interest rate and currency trades, totally avoiding the stocks. As I mentioned yesterday, my year end studies showed me nothing but overvalued stocks. I had seen this before, most notably in 1987 when I sold out and went to the Carribean for three months. My guess was correct as shortly after I left, the market crashed hard. My only exposure was to the gold market (ABX) as I thought it could be a banking crisis that would be the market meltdown catalyst.

I doubt that gold would serve as a safety trade. Again, the world flocks to the dollar. 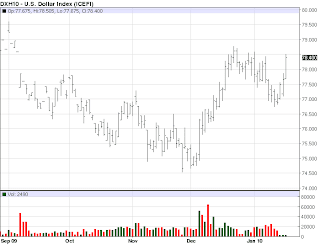 Is it already happening? With Greece's bankrupcy threat weighing on the Euro, and perhaps other events that remain hidden, has the flight to the dollar already begun? Interest rates also are down sharply this morning translating to rising bond prices. Strong dollar? Strong bonds? Weak market? I think that the ground is starting to shake. CAN YOU FEEL IT?
Labels: Asset Design Center, Bear Market, bonds, dollar, Gary Lewis, interest rates, Stock Market